On Tuesday 6th October 2009 I continued to follow Chesterfield’s run in Johnstone’s Paint Trophy after watching Chesterfield’s 5-1 win over Burton Albion in round 1. Tonight I was watching the Spireites play League 1 side, Huddersfield Town in a classic match full of drama.

Before going to Saltergate we stopped off at the site of Chesterfield’s new stadium, due for opening July 2010. It has had a dramatic change since our last visit, with the entire steel work of a stand now up. You can see a few photos of the new stadium below.

Despite the fact Huddersfield Town are a division higher than Chesterfield, I arrived at this game with high hopes after Chesterfield had thrashed Burton Albion 5-1 in the first round.

The goalless first half was anything but exciting and left us wondering if coming to this game tonight had been worth it. The best chance of the half went to Huddersfield as a header beat the keeper Tommy Lee but hit the post and bounced out to safety. Apart from that the half had been rather scrappy and a poor game. A complete contrast to the 6 goal thriller we were about to witness in the second half!

Huddersfield hit the woodwork twice more in the second half before Chesterfield took the lead on the 57th minute when Donal McDermott’s cross met Drew Talbot who headed home to put the League 2 side ahead.

Huddersfield replied quickly equalizing on the 65th minute when Anthony Pilkington stuck the ball home from close range after Spireites keeper Tommy Lee was unable to hold onto a shot from the edge of the box.

After this I have to admit I thought Chesterfield’s chance had gone, however I could not have been more wrong. Drew Talbot scored his second goal of the game and his fourth of the tournament so far after a great run from Mark Little, on loan from Wolves, the ball was played across the face of the goal Talbot stuck the ball in off the crossbar to put the Spireites ahead for a second time. Jordan Bowery joined the Chesterfield senior ranks this season after playing for the youth team and scored his first senior goal should have put the game out of sight at 3-1 on the 90th minute. The ball fell to Bowery on the edge of the box and he blasted the ball into the far corner.

However there was some late drama to come yet, despite many Hudddersfield Town fans leaving at 3-1. The referee signalled three extra minutes to be played onto the 90. With Chesterfield 3-1 me and my Dad were already talking about who we may get in the next round, not expecting Huddersfield to do the impossible and score twice.

On the 93rd minute Anthony Pilkington bagged is second goal of the night scoring straight from a free kick, which was given by the referee because of an apparent foul by Mark Little on Lionel Ainsworth despite it looking to be a perfectly good tackle. Then on the 95th minute Tommy Lee was unable to hold on to a shot and Nathan Clarke bundled the ball into the net to take the game to penalties (no extra time).

So the game went to penalties. I had never seen a penalty shoot in real life before so that was a first for me. Huddersfield won the toss and the penalties were taken towards the away end.

Despite scoring two goals tonight Anthony Pilkington put his penalty over the bar and Tommy Lee saved Jim Goodwin’s penalty while Chesterfield scored all of their first three penalties leaving Donal McDermott only needing to score to put Chesterfield through to round 3. McDermott kept cool and calmly put the penalty away to put Chesterfield into the next round.He then ran the full length of the pitch to celebrate with the fans on the Kop.

The match had been a classic with 6 goals, a penalty shoot out, a late comeback and I feel it’s one the best (if not best) games I have seen at Saltergate. A night to remember! 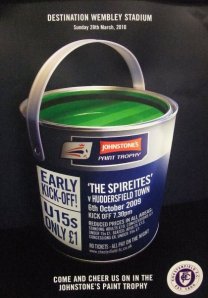 A flyer we got for the Johnstone’s Paint Trophy 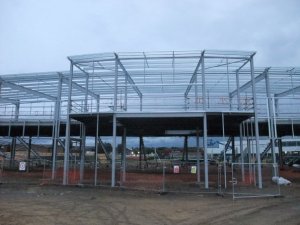 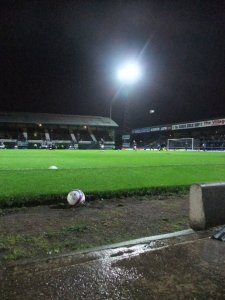 A cold and wet evening at Saltergate

The floodlights shine through the spider webs at Saltergate 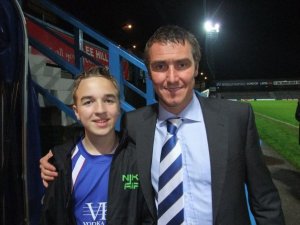