Besides the hundreds of articles on this website, I have also  had articles published by many different football clubs and other organisations – all of which can be seen here! 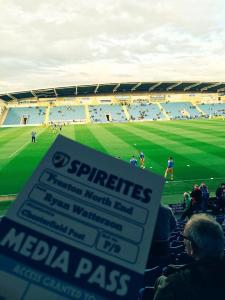 Since the the final game of the 2014/15 season, I have been working with Chesterfield Post on various different events at Chesterfield FC. This included full accreditation for the press box for the whole of the 2015/16 season, as well as attending press conferences and other media events at the club!

You can view reports from the events I’ve worked on so far below: 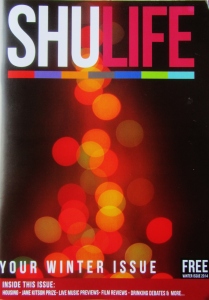 SHULife is the student magazine of my University, Sheffield Hallam, and is written and published entirely by the students. After reporting on the launch of a new clothing line by Bring Me The Horizon in Sheffield, my article about this event featured as the main music story in the Winter 2014 issue.

I have also had a review of a number of gigs published on SHUlife’s website equivalent, which you can see HERE (Pigeon Detectives) and HERE (Young Guns) 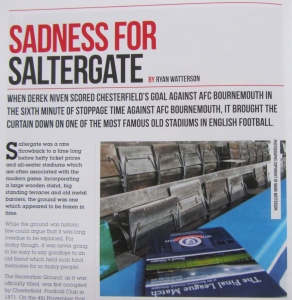 For Chesterfield’s visit to Fleetwood Town in the Johnstones Paint Trophy Northern Area final first leg in February 2014, I had a two-page article published in the official matchday programme.

The article talked about Chesterfield’s former home Saltergate, and you can read it in the full HERE 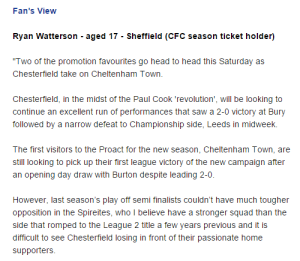 My short preview of Chesterfield’s home game against Cheltenham Town in August 2013 was published on the club’s official website as the ‘Fan’s View’.

You can view it in full HERE 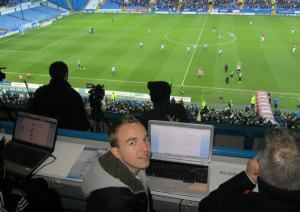 Between September 2012 and March 2013, I visited Hillsborough on four occasions for work experience.

I went behind the scenes – spending time in the media room before the games and attending the press conferences with the managers and players afterwards.

I started off for the first game simply shadowing the media team in the press box, and eventually had two of my own match reports published on the Owls’ official website.

You can read about the four visits by clicking the links below: 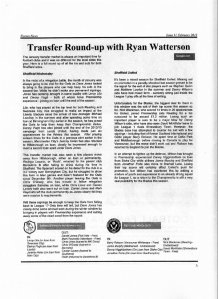 The newspaper at my college in Sheffield published an article of mine in February 2013. It was a round-up of the January transfer window activities of Sheffield United and Wednesday.

You can read the full article by clicking the image. 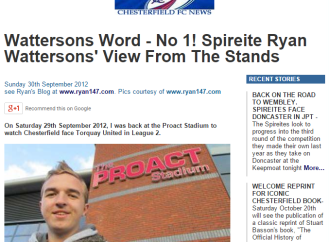 In September/October 2013, three of my match reports from this website were published on the Chesterfield Post website under the title ‘Watterson’s Word’. You can read below: 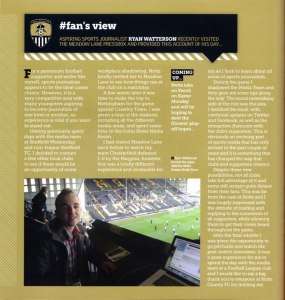 On 10th November 2012, I spent a day at Meadow Lane with the Notts County media team.

I shadowed the media team in the press box, spent time in the press room and went pitchside after the match to witness the post-match interviews.

You can read about my experience HERE

An article about my experience also featured in the Notts County matchday programme a few weeks later. You can read it in full by clicking the image. 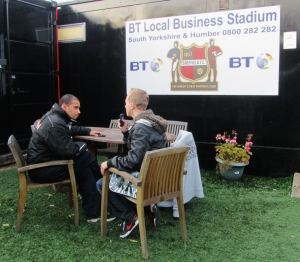 In September/October 2012, I went to Sheffield FC to write the match report for the programme and official website of the world’s oldest football club.

I was given full access to interview manager Curtis Woodhouse as well as the players, and I had my report published by the club for the matches against Kings Lynn and Sutton Coldfield – as well as another article about my experience at Sheffield FC

You can read about my experiences below: 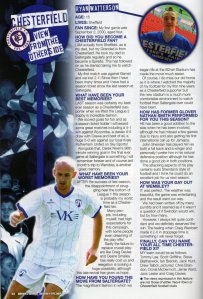 When Chesterfield visited Yeovil Town on 28th April 2012, I did an article for the ‘Green and White’ matchday programme for their ‘View from the other side’ section. I talked about my highlights, worst moments, my day out at Wembley and much more.

You can read the full article HERE 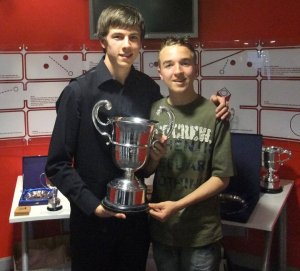 On 23rd and 24th of May 2010 I was invited to the World Snooker Academy in Sheffield as Media Officer for the EASB (English Association of Snooker and Billiards) finals weekend.

I was given full access to the event – interviewing the players and reporting on the matches for both the EASB website and Snooker Scene Magazine.

You can read about my experience HERE 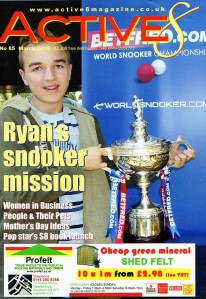 My local Sheffield Magazine Active8 featured a 2-page article about me back in March 2010 and I was also the cover star!

You can read it HERE