On Saturday 10th November, I was invited to spend a day with the Notts County media team at Meadow Lane for their game against Crawley Town in League 1.

Having previously spent days with the media at Sheffield FC and Sheffield Wednesday, Notts County had kindly invited me to Meadow Lane to see how things work at their club on a matchday.

The journey to Nottingham was simple, with the train taking less than an hour from Sheffield and the football ground is easily within walking distance of the station. I collected my media pass and headed to the main reception where I met up with Notts County press officer Ralph Shepherd, who had invited me down for the day. Ralph gave me a tour of the media areas and I spent some time in the media room before making my way up to the press box with around half an hour to go before kick off.

Ralph sat with me during the game, telling me how things work at Meadow Lane on a matchday and giving me some tips along the way. Everyone at the club was very friendly and helpful and it was a wonderful experience for me to get a feel for the job as I wish to pursue a career in sports journalism in the future.

Today’s game was vital for both sides as they looked to push for promotion from League 1. The two sides were just a single point and position apart, with Crawley in 4th and Notts County in 5th in the table.

The Magpies were in a good run of form coming in to the game, having lost just a single game in their last five in all competitions and had kept two consecutive clean sheets. However, their home form wasn’t as convincing with County failing to pick up a home victory since 22nd September. Meanwhile, Crawley Town had only lost one game in their last five league games. However, the loss had come in their previous game against Coventry City in mid-week so the Red Devils were looking to bounce back in this game.

There’s was a minutes silence ahead of kick off for Remembrance Sunday as everyone inside the stadium payed their respects.

The home side started much brighter, but it was Crawley who had the first sight of goal when Jonathan Forte fired at goal but his effort was comfortably stopped by County goalkeeper Bartosz Bialkowski.

The Magpies then started to totally control the play and create plenty of opportunities in front of goal. An attacking 4-3-3 formation worked well as the wingers continually caused the Crawley defence problems.

Jamal Campbell-Ryce looked particularly dangerous down the flank and he gave the home side their first good chance. His cross found striker Yoann Arquin in the box but the Frenchman couldn’t direct the ball on target.

Jamaican international Campbell-Ryce was once again involved as the Magpies took the lead in the 12th minute. A perfectly waited pass found captain Neal Bishop through on goal and the midfielder composed himself before sliding the ball past the on-rushing goalkeeper. Bishop’s fifth goal of the season gave County a deserved lead and the Meadow Lane Kop were singing loudly to create an excellent atmosphere inside the stadium.

Notts County continued to dominate the play and it was almost 2-0 soon after as Campbell-Ryce’s strike was palmed away by Paul Jones. The resulting goalmouth scramble saw a couple of players come close but no one could find net and it remained just 1-0. Arquin then had another free header in front of goal but once again his effort was off target.

The visitors did occasionally look threatening on the counter and Nicky Adams forced a decent save out of Bialkowki in a rare first half attack for Crawley. Billy Clarke came even closer for the Red Devils when his close range header was instinctively stopped by the goalkeeper.

Notts County were still searching for a vital second goal and Gary Liddle’s came close to putting distance between the two sides when his low strike was just inches wide of the target.

However, right on the stroke of half time Crawley made the Magpies pay for their many missed opportunities courtesy of a goal from Forte. A low cross from Adams found Forte in the box and the former County loanee side footed the ball in to the net to leave the score level at the break.

The second period was much scrappier as the two sides cancelled each other out and created far fewer chances. Crawley had a couple of strikes blocked by some last ditch defending while Arquin saw an effort saved by Jones in the Crawley net.

Veteran striker Lee Hughes was brought on with just over a quarter of an hour to go as Keith Curle attepted to take all 3 points. Hughes had a great chance to regain County’s lead immediatley when his namesake Jeff found him unmarked just yards out but he headed the ball past the post, much to the disbelief of many of the home supporters.

Arquin had another chance to give his side the victory right at the end. A short corner eventually saw the ball fall to the Frenchman’s feet right in front of goal but the shot was magnficently kept out by the goalkeeper.

The game ended 1-1 and while Notts County probably deserved more from the game, they had failed to make their opportunities count. In the end, the Magpies’ wastefulness had cost them dearly and the visitors headed back to West Sussex with an important point.

After the game, I was allowed to go to pitchside and watch the post-match interviews. I saw the two managers, Keith Curle and Richie Barker, talk to the press as well as a couple of the players including Jamal Campbell-Ryce and Andre Boucaud.

As I headed out of the ground, a couple of players were signing autographs for supporters and I got a photo with Notts County’s Francois Zoko and Crawley’s Argentine player Sergio Torres.

I had a great day with the media team at Meadow Lane. It was another great experience for me to see how the media works on a matchday at another football league club and I would like to say a big thank you to Ralph Shepherd and everyone at Notts County FC for inviting me to today’s game.

The three stadiums in Nottingham are all next to each other! 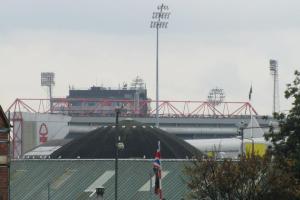 The three different sets of floodlights

I look over the river at Meadow Lane 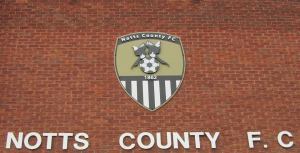 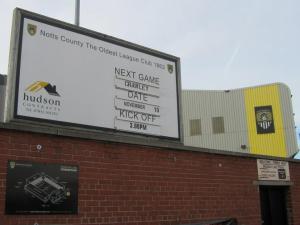 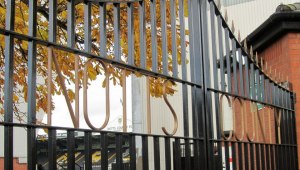 The Oldest Football League Club in the World

The top of the Jimmy Sirrel Stand

The view from the press box

The media prepare for the game

Sitting in the press box

The Notts County players warm up 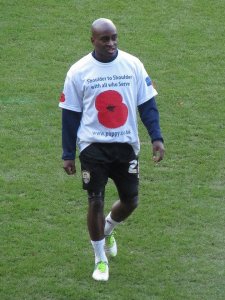 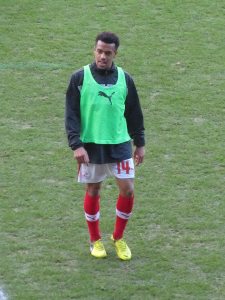 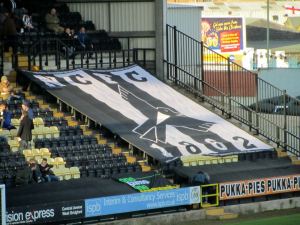 A flag on the Kop

A Crawley flag on the away end 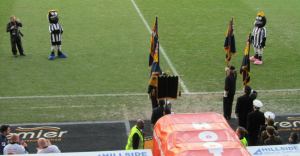 Veterans lead the players on to the pitch

The players line up 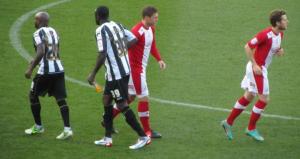 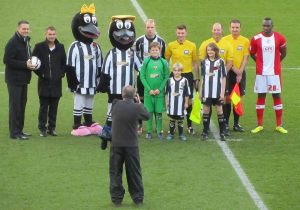 The pre-match photographs are taken 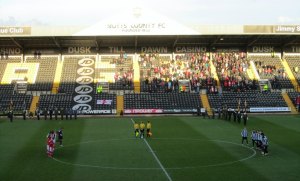 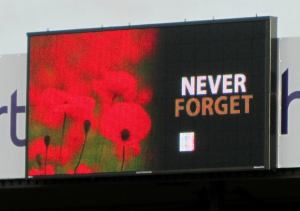 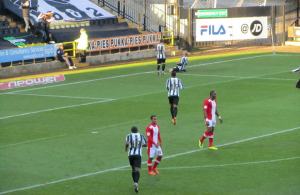 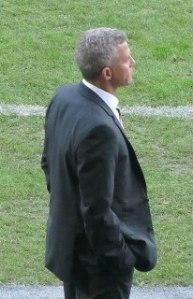 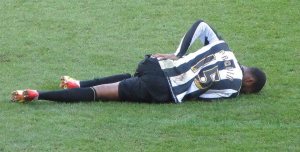 A rare first half attack for Crawley

The referee checks on a Notts County player 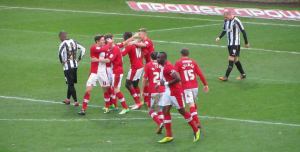 1-1 in the final minute of the half

Jamal Campbell-Ryce is given a yellow card 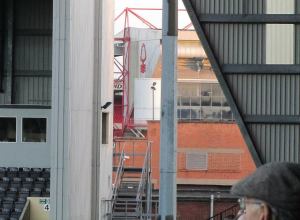 Nottingham Forest’s City Ground is visible from inside Meadow Lane

The second half gets underway 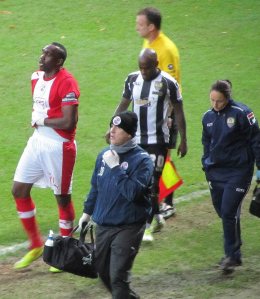 Lee Hughes is brought on with 18 minutes to go 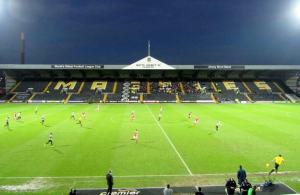 The two sides search for a winning goal

The floodlight shines over the stadium 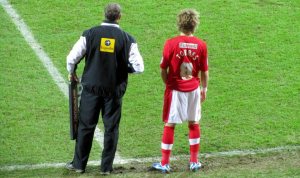 Sergio Torres comes on for Crawley

The supporters watch the final few moments of the game

The players leave the pitch 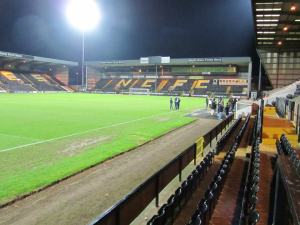 The press stand at pitchside

The club badge inside the tunnel

Looking through the tunnel 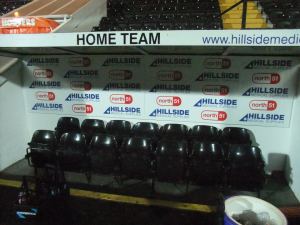 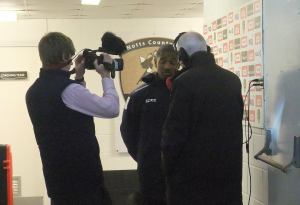 Jamal Campbell-Ryce speaks to the press

Keith Curle gives his views on the game

The Notts County manager is interviewed

The two managers speak to the press

Campbell-Ryce is interviewed at pitchside 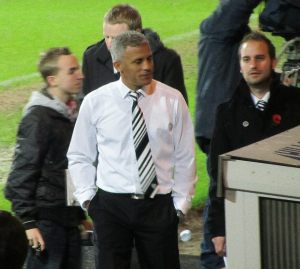 I stand next to the Notts County manager 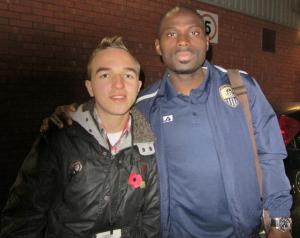