On Saturday and Sunday the 23rd and 24th of May I was invited to the World Snooker Academy in Sheffield as Media Officer for the EASB (English Association of Snooker and Billiards) finals weekend.

As it was my first ever time doing any proper journalism for any event, I was a little nervous heading to the Academy. However, everyone was very welcoming and friendly. I was greeted by John Hartley, who had asked me to come along as Media Officer a few weeks earlier. I had snapped up the chance as it sounded like a good experience if I want to become some sort of sports journalist in the future.

I got access to the backstage areas of the Academy, got a mention in the tournament programme and even got my own office area for the weekend to type my match reports.

The first days play began at 10:30am, with three matches going on. There were no divides or anything so I could see all three tables from where I was sat.

The first set of matches were the first session of the English Amateur Championship final between PIOS rankings winner Jack Lisowski and Leo Fernandez, Joel Walker v Sanderson Lam in the Under 16’s final and Kamran Ashraf v Ryan Wood in the Club Players Championship.

Poor Sanderson Lam, who is from Leeds, got lost in Sheffield and ended up arriving late, which meant a delayed start and his opponent Joel Walker got a frame start.

The table I watched mainly was Lisowski v Fernandez. Jack Lisowski took a 3-0 lead, before Fernandez took the next two to pull back.

At this point Joel Walker, winner of the Ronnie O’Sullivan’s star of the future competition, was 5-0 up against Sanderson Lam in their best of 11 match so I went over to see that game to a finish.

Lam got in first in the 6th frame but missed and Walker made a good break to complete the whitewash.

Back on the Lisowki/Fernandez match, Liswoski had won the last 3 frames of the session to lead 6-2 in the best of 17 frame final.

The last match between Ashraf and Wood was going at quite a slow pace so we had a bit of waiting before the presentation and buffet could take place. Kamran Ashraf eventually won the match 5-1 to lift his first title of the weekend, as he also faced Lam in the Under 19’s final the following day.

The presentation and buffet took place now, inside the entrance of the Academy. The winners and runners up of the Club Players and Under 16’s championships went up and accepted their trophies. Joel Walker and Kamran Ashraf got their trophies, while Sanderson Lam and Ryan Wood collected their runners up trophies.

After this ceremony and the buffet had completed, I got a chance to interview the two winners from the morning. I interviewed Joel Walker first and then Kamran Ashraf. Both the players were friendly, answering all their questions and letting me take photos of them with their trophies.

The afternoon play began at 4pm, with the matches for this session being the second session of the English Amateur Final and Shane Castle vs Adam Bobat in the Under 14’s final.

I watched the second session of the English Amateur final between Jack Lisowski and Leo Fernandez. Jack was already 6-2 ahead, and he won the next two to lead 8-2. Leo got in first in the 11th frame but just as he was getting into the flow a bit more the scoreboard stopped working so they had to pause play for a couple of minutes which can’t have helped him. This took nothing away from Jack’s victory though, he was the better player for most of the match and he thoroughly deserved the win. I think he will do well on the main tour next season and in years to come.

I went round to watch Jack receive his trophy, and add his name to a long and illustrious list of names already on the trophy. I also got the the chance to interview both Jack and Leo, they were both very friendly and did wonderful interviews for me.

The match between Shane Castle and Adam Bobat was taking a while, and I needed to get off home so I missed the end of that match. In the end Shane came from 4-3 down to win 5-4, with a 50 break in the deciding frame.

The first session of day 2 saw Kamran Ashraf v Sanderson Lam in the Under 19’s final and Hannah Jones v Jan Hughes in the Ladies final.

I had seen both Ashraf and Lam play the day before so I decided to watch the Ladies final so I got to see different players playing.

The first ever Ladies final got off to a slow start, both players clearly feeling the pressure, but Hannah eventually took the first three frames each on the colours. She also took the next to lead 4-0 at the interval, and won the next to win the title with a 5-0 victory.

Over on the other table Sanderson Lam took a 4-3 lead against Kamran Ashraf in their best of 15 match, though both players were playing well and it look like it was going to be a close game.

The presentation for the Ladies final took place and then I interviewed Hannah Jones, winner of the first ever English Ladies Champion.

Gary Morris then arrived, who was supposed to be playing Steve Judd in the Seniors final. However, Judd had pulled out of the final just days before and understandably, Morris was visibly disspointed. I did a short interview with him, and he was very annoyed and upset at not getting the chance to play in this finals weekend.

Sadly there was nothing the EASB could do about it so Morris was awarded the win. He still got a presentation and the Seniors trophy, but it clearly wasn’t the same for him as he hadn’t got the chance to play.

The evening games were the last ever English Team final between the West Midlands and Exeter and the last session of the Under-19s final between Lam and Ashraf.

Sadly this wasn’t to be Lam’s weekend. After getting whitewashed the previous day in the Under-16s final, he lost to Kamran Ashraf 8-4 after leading 4-3 after the first session.

Over on the other table West Midlands looked to have upper hand in the Team championship final. Leading at 3-1, Exeter pulled one back to make it 3-2, before West Midlands won the next two to win the match 5-2 and become the last ever team champions. Sadly this would be the last team tournament due to lack of interest, only 8 teams entering this season.

The final presentation of the weekend took place, with the winners getting their trophies. Kamran Ashraf was lifting his second trophy of the weekend, after winning the Club Players Championship the previous day.

I also got my own award for standing in as Media Officer for the weekend. I had a wonderful time, got some good experience and picked up some tips on how to improve my writing.

The programme for the finals, I got a sepcial mention in it for being Media Officer 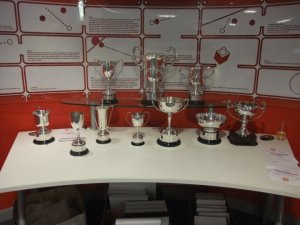 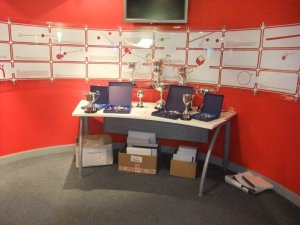 The Trophy for the Southern Section of the English Amateur, won by Leo Fernandez 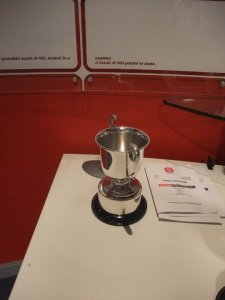 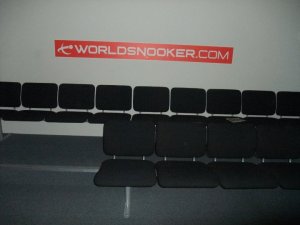 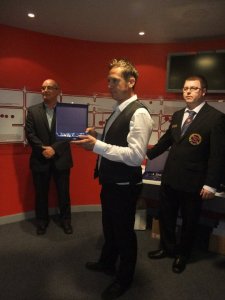 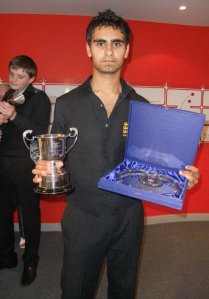 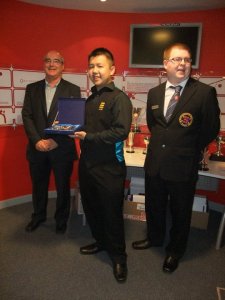 Sanderson Lam - Under 16s Runner Up 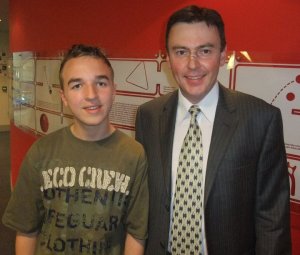 with Jason Ferguson who played at the Crucible 3 times 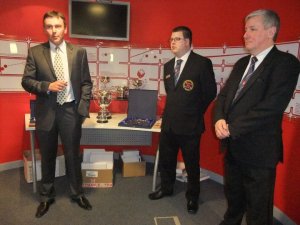 Jason Ferguson makes a speach during the second presentation 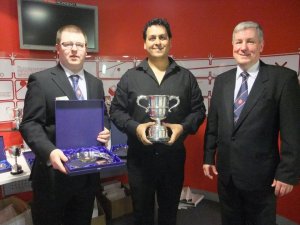 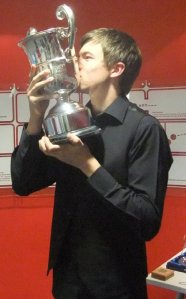 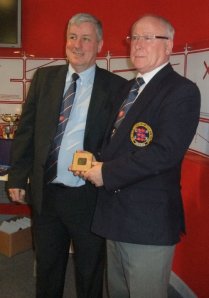 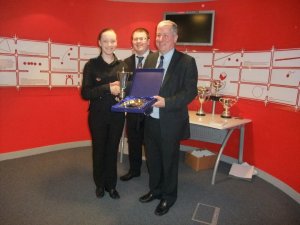 with the first ever Ladies Champion

I interview Hannah after her victory 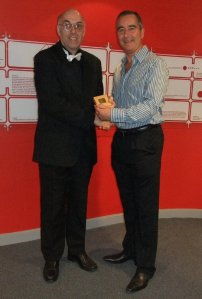 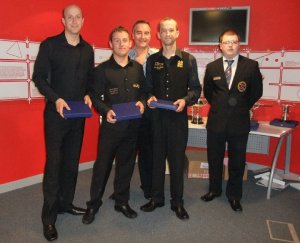 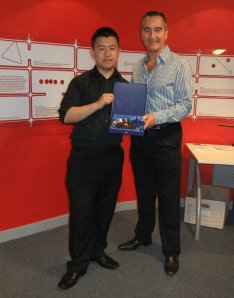 Sanderson Lam - Under 19s Runner Up

Kamran Ashraf with both his trophies. The Club Players and Under 19s Trophy

I receive my own personal award as Media Officer