On Saturday 20th October 2012 I was invited to the BT Local Business Stadium to report on the game between Sheffield FC and Sutton Coldfield Town.

After doing my first report for Sheffield FC last month against Kings Lynn Town, I was invited back to the BT Local Business Stadium to report on their next home game against Sutton Coldfield Town.

I arrived early and did a pre-match interview with manager Curtis Woodhouse, who was clearly pleased with how the campaign had gone so far, saying “so far so good” and that “our never say die attitude is very pleasing”.

The oldest club in the world were on a good run of form coming in to the game, avoiding defeat in the league since the 21st August. A dramatic final few minutes had earned them a point against Hucknall Town, coming from 3-1 behind to draw 3-3 and the side currently sat in 4th in the Evo Stik Division 1 South table.

Meanwhile, today’s visitors Sutton Coldfield Town were sat in 15th in the league table. The Royals had yet to pick up a victory in the league in October and had lost their previous match 4-2 to Stamford in midweek.

The form book was thrown out of the window in the opening few minutes of the game, however, as the visitors dominated the play and took a commanding lead. It took just two minutes for Sutton Coldfield to take the lead when Kristian Ramsey-Dickson fired a strike from the edge of the area that left goalkeeper Liam Flynn with no chance.

Shaquille McKenzie was gifted an opportunity to level the score line just moments later when Steve Woolley burst down the wing and crossed the ball to the young striker in front of goal. The pressure clearly got to the young striker who scuffed his effort wide of the target to leave his side trailing.

The visitors made him pay for this missed chance when Ramsey-Dickson grabbed his and the Royals’ second goal of the game on the 14th minute. The striker left Warren Burrell for dead before chipping the ball over Flynn and in to the back of the net to double his sides advantage.

Just two minutes later it was 3-0 to the visitors, who were in the ascendancy and looked like scoring every time they went forward. Luke CHAPMAN turned past his marker and fired the ball in to the far corner to almost put the result beyond doubt after just a quarter of an hour.

The Sheffield side were in a state of shock as they had conceded 3 goals in just 16 minutes after coming in to the games as favourites. It was a huge mountain to climb for the home side but Jamie Hadfield gave his side a glimmer of hope on the 21st minute. Woolley curled a free kick in to the box and Hadfield bundled the ball in at the far post to make it 1-3.

The game went rather quiet for the remainder of the half as Sheffield attempted to get back in to the game. The home side looked short of ideas as the Sutton Coldfield defence held out comfortably while still looking like they could cause problems at the opposite end.

As the break approached, McKenzie had another chance to score for Sheffield. Woolley once again charged down the wing and crossed the ball on to the head of the striker, whose effort flew over the crossbar.

The early exchanges of the second half were very scrappy with neither side taking control of the game. The Royals began to grow in to the half as they attempted to put the result beyond doubt. As the hour mark approached, the visitors came very close to doing so when Joel Kettle’s header was cleared off the line by Woolley.

Experienced forward Vill Powell replaced McKenzie as the Sheffield manager look to salvage something from the game. He almost had an immediate effect when Matt Roney’s free kick was deflected and fell straight to Powell, whose first time shot was instinctively saved by Sutton goalkeeper Lee Evans.

The chances were few and far between for either side as Sutton Coldfield appeared to settle with what they had while Sheffield’s attacks rarely managed to penetrate.

On the 87th the home side were handed a lifeline when Chris Adam was tripped by James Quiggin inside the area and the referee pointed straight to the spot. Woolley sent the goalkeeper the wrong way to make the score 2-3 but it proved to be too little too late as the home side fell to only their second league defeat of the season.

After the game, I had the opportunity to do a couple of post match interviews. I spoke to Curtis Woodhouse, who was clearly disappointed to be see his side defeated, telling me how their “inability to defend” had cost them. The Sheffield manager also said that “we were poor and it would have been a travesty if we had gotten anything from the game”.

Man of the match Lee Featherstone impressed on his debut and he was the second person I interviewed. He told me how he was “shell-shocked to be 3-0 down so early on” before going on to say that his overall goal with the club is “Promotion.”

Despite the defeat, Sheffield remain 4th in the league table although they are now 16 points behind leaders Coalville Town, albeit with three games in hand. Sutton Coldfield’s victory sees them move up to 12th in the table and keeps them away from the relegation zone.

I enjoyed my second match day as Sheffield FC’s match reporter. It is great experience for me and my match report will be featured on both the official website and programme. 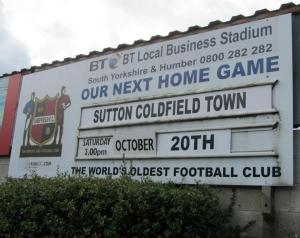 Sutton Coldfield Town are the visitors for today’s game

“Welcome to the Home of Football” 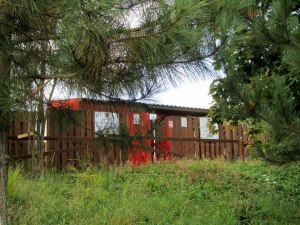 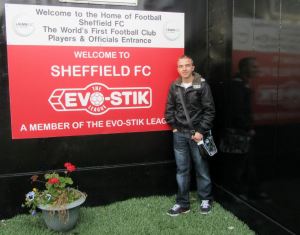 A message near the dressing room

Inside the BT Local Business Stadium 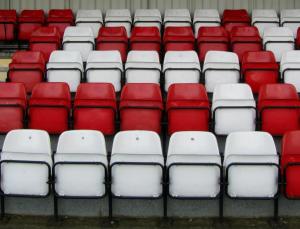 The visiting players head back to the dressing room

The home of the world’s oldest football club

Looking towards the tunnel

The Sheffield players warm up

I hold up the matchday programme 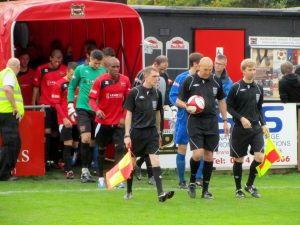 The handshakes before kick off

Sheffield get the game underway 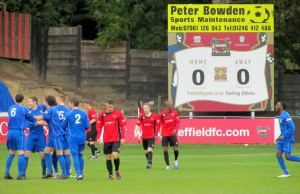 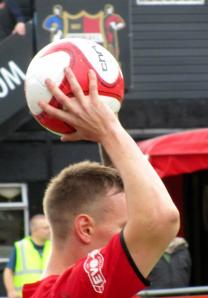 Lee Featherstone takes a throw in

Ramsey-Dickson makes it 2-0 to the visitors

Jamie Hadfield pulls a goal back for Sheffield at 1-3 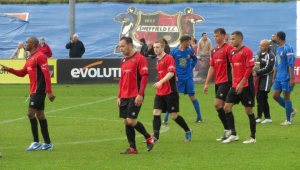 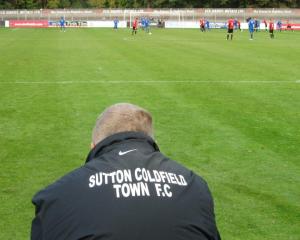 A Sutton Coldfield supporter watches the second half 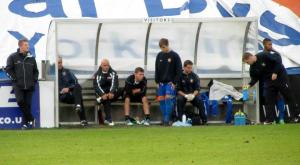 Reporting on the action

The home supporters vent their frustrations 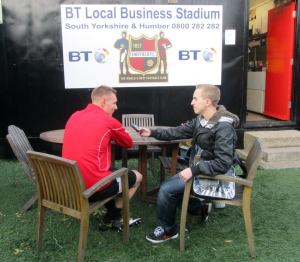 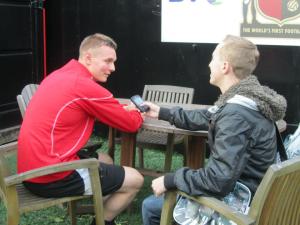 The Sheffield boss was clearly disappointed to see his side defeated