On Saturday 13th October 2012, I went to the Proact Stadium to watch Chesterfield play Dagenham and Redbridge in League 2.

Today’s opponents, Dagenham and Redbridge, had never played at the Proact Stadium having been in a different division to the Spireites since the move in 2010. The last time the two sides met was at Saltergate in April 2010, when the game ended 2-2 after the visitors had led 2-0.  In the six previous meetings between the two sides, Chesterfield had won just once while the Daggers had won two with the other three games all ended level.

The major talking point ahead of this game was Chesterfield’s signing of former Portugal international and Premiership star Luis Boa Morte. The former Arsenal, Southampton, Fulham and West Ham player had spent unsuccessful spells in Greece and South Africa last season and was looking to return to English football. After meeting up with former Fulham teammate and Chesterfield assistant manager Mark Crossley, the 35 year old midfielder decided to join the Spireites until January and he was set to make his debut against the Daggers.

Both sides came in to this game on the back of victories in the league last Saturday. Chesterfield’s 1-0 victory over Aldershot was only their third victory of the season while Dagenham had beaten Bradford City 4-3 in an incredible game the previous weekend. However, neither had made the most convincing start to the new campaign and both were sat in the lower regions of the league 2 table. Midweek defeats to Doncaster Rovers and Southend United had seen the two teams’ hopes of glory in the Johnstones Paint Trophy ended and so a win today was desperately needed to kick start their respective seasons.

Caretaker manager Tommy Wright made three changes to the side that had won at Aldershot last Saturday, with Jack Lester and Sam Hird replacing Micah Evans and Tendayi Darikwa while new signing Luis Boa Morte took the place of Mark Allott in the starting eleven. Daggers boss John Still made one change to his team with Matt Saunders replacing the injured Billy Bingham.

The home side started the brightest and had a flurry of early corners, one of which found the head of Neal Trotman who failed to direct his effort goalwards. Luis Boa Morte’s quality pass played Drew Talbot through on goal but he fired a weak effort towards goal that failed to challenge Chris Lewington in the Dagenham goal.

The system that the Spireites had set up with made it difficult for them to create many good chances. Constant long balls forward came to nothing as Jack Lester struggled to play the lone striker role. Boa Morte did show some moments of quality but the reluctance of some of his teammates to play the ball to his feet rather than booting the ball up field frustrated both him and many of the home supporters.

The visitors quickly began to create some chances of their own Dwight Gayle firing shot just inches wide of the post before Medy Elito played a dangerous ball in front of goal that failed to find an attacker.

The game went through a quiet spell with few opportunities before the Daggers took the lead on the 42nd minute. Sam Williams picked up the ball on the edge of the area and fired a low shot past Richard O’Donnell and in to the far corner to put the visitors ahead.

Just as they had in the first half, the Spireites began the second period strongest as they pushed for an equalising goal. They almost found it just five minute in to the half when a goalmouth scramble led to Chris Atkinson hitting an overhead kick that bounced off the crossbar.

Parity was restored on the 55th minute when Craig Westcarr fired the ball towards goal and Lester poked it home from close range to grab his sixth goal of the season in all competitions.

However, the lead lasted just two minutes as the visitors went straight down the other end and hit back with a magnificent goal. Williams hit an unstoppable shot from just inside the area in to the top corner of the net to regain the lead for the Daggers at 2-1.

The Spireites continued to push for an equaliser but there was a real lack of urgency in a game that they really needed to pick up points from. Liam Ridehalgh’s cross found Lester whose effort was headed off the line while Boa Morte came close to scoring on his debut for the club. Westcarr found the former Portugal international unmarked inside the box but his first time shot was straight at the Dagenham goalkeeper and the score remained 2-1.

The Daggers battled hard and managed to hold on to the 3 points. It wasn’t a particularly convincing performance by either side but two great goals from Sam Williams had given Dagenham the victory which saw them move to 17th in the League 2 table. The result left Chesterfield 7 points off automatic promotion in 15th position and left many supporters questioning whether caretaker manager Tommy Wright is the right man for the job.

After the game I met Dagenham and Redbridge manager John Still and Dominic Green, who had previously had a spell on loan at Chesterfield during the final season at Saltergate. I was hoping to meet Luis Boa Morte after the game, but he didn’t come out before we had to set off home and so I will have to get my picture with him after the next home game, which is against Fleetwood Town on 23rd October. 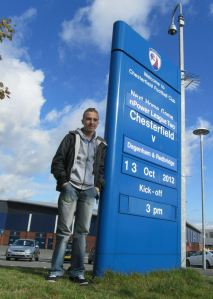 Dagenham and Redbridge make their first visit to the new stadium 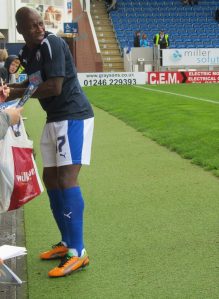 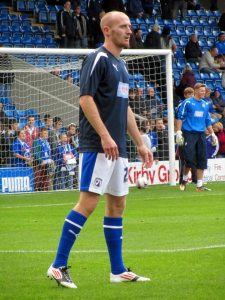 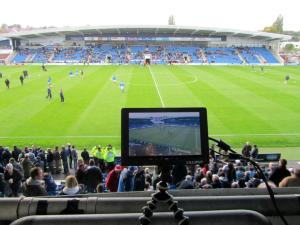 The view from the TV gantry 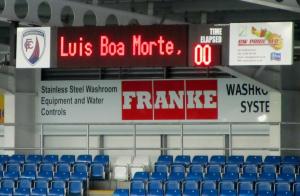 Luis Boa Morte is in the starting line up

The Chesterfield flag on the Kop 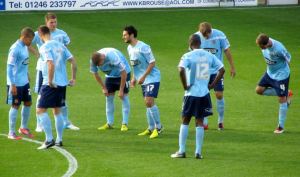 The Dagenham players wearing their blue away strip 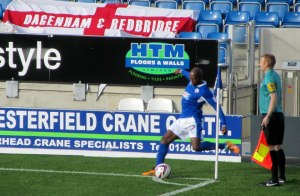 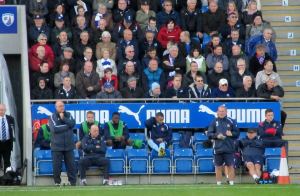 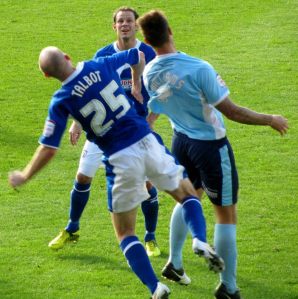 Drew Talbot and Sam Williams jump for the header

The visitors open the scoring on the stroke of half time 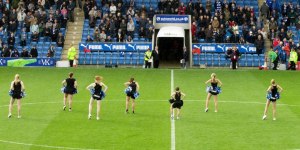 The new Chesterfield cheerleaders entertain the crowd at half time 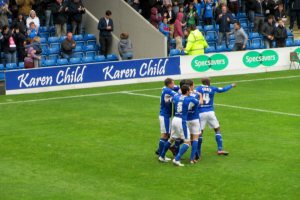 Williams regains the lead for Dagenham

It took just two minutes for Dagenham to regain the lead

Chesterfield get the game back underway 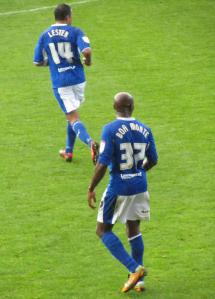 Boa Morte is watched closely by his marker 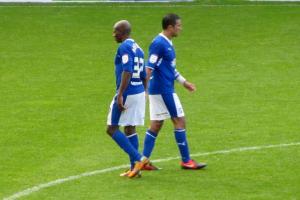 Boa Morte and Lester after the game

The Dagenham players applaud their supporters

The players huddle up after the match

Dominic Green, who spent a loan period at Chesterfield