Here is my latest report from the World Snooker Championship qualifiers at the EIS, Sheffield.

We arrived a about 11am, and when we got to the ticket stand there was luckily still 3 tickets left so we bought two and headed in. Just as we were heading for the snooker hall I noticed James Wattana pass me, who was one of only two players that I had yet to meet from this seasons 96 professionals. I ran after him and he was nice and had a photo with me which leaves only David Gilbert to complete my collection.

When we entered the hall, all seats were taken. It was the busiest I had seen the venue in the past week, and unsurprisingly the majority wanted to watch 6 times world champion Steve Davis taking on Adrian Gunnell. It was 2-1 to Steve when we arrived and there was one to go before the interval. However this turned out to be a very scrappy and long frame which lasted over 40 minutes before Steve Davis took the frame for a 3-1 lead at the interval.

We also watched the end of a 137 clearence from Matthew Stevens, against Marcus Campbell, which took them into the interval at 2-2.

When seats became available, I could see three matches. Liang Wenbo v Rod Lawler, Alan McManus v Fergal O’Brien and Steve Davis v Adrian Gunnell. As the Steve Davis match started to become very slow, I began watching Liang Wenbo who was playing some magnificant snooker. From 1-0 down, Wenbo stormed the next 8 frames with breaks including a 97, in which he missed the green for a century. Rod Lawler never looked to have a chance in the bits of the game I watched, and the young chinese player blew him away finishing the morning session 8-1 ahead.

I didn’t watch alot of the McManus/O’Brien match, but Fergal made a great comeback in the first session from 4-2 down he ended up leading 5-4.

Legend Steve Davis looked far too good for his opponent Adrian Gunnell at 6-1 ahead, however Adrian came back fighting and went into the second session at 6-3 behind after making break of 102 and 113 in the last two frames of the session. On the other two tables, which I could not see, Stevens lead Campbell 5-4 and Mark Davis lead Harold 6-3.

We decided to go and get some lunch at a nearby KFC, and while we were in there Marcus Campbell, who was playing Matthew Stevens, walked in. We were just leaving so we went up to Marcus while he waited for his food, wished him luck and even had a photo with him in KFC! It must have worked as Marcus ended up winning the match 10-9 to book his place at the Crucible Theatre.

During the mid session invterval I also met and got a photo with Alan McManus, as well as chatting to some people we know from the internet.

Luckily we managed to get practically the same seats for the afternoon session, which saw the same five matches come to an end. The Wenbo/Lawler match carried on as it had before and didn’t even make the interval. After losing the first to go 8-2, Liang won the next two to become the first qualifier to book his place at the Crucible.

Steve Davis’ match did make the interval, but only just. Steve took 3 of the first 4 frames to lead 9-4, and took the last one to get through to the final stages of the World Championship in a record 5th decade.

I went down stairs and got a photo with Steve, who was very friendly, and also Nigel Bond, Joe Swail and Fergal O’Brien. Who continued to play great snooker and came from 4-2 behind to win 10-2.

We decided to call it a day, with only two matches left, Stevens 7-6 Campbell and Mark Davis 9-5 Harold. Matthew Stevens was outside on his interval as we left and I got a photo with him to finish of the day.

The Players and Venue 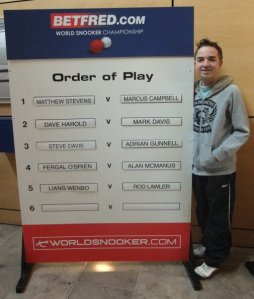 with Marcus Campbell in KFC! 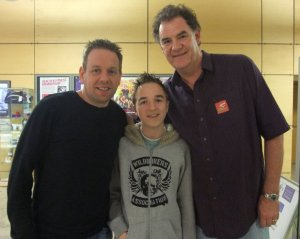 Joe Swail, me and Del Hill 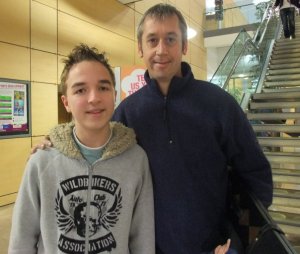 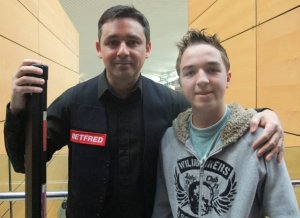 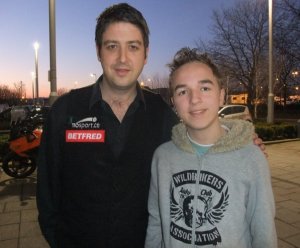 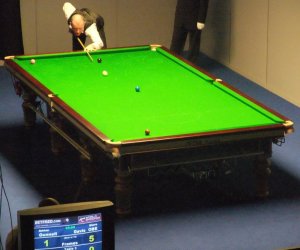 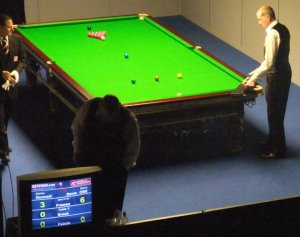 Steve Davis puts his cue away after a superb performance 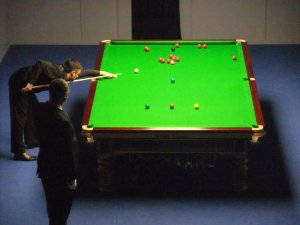