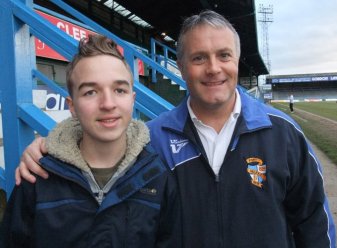 On Saturday 13th March 2010 I went to Saltergate to watch Chesterfield get completely annihilated against Port Vale, who are one of only 3 sides to play at Saltergate in its first and last season, the other being Grimsby Town and Lincoln City.

When we arrived at the ground, about 40 minutes before kick off, there was a huge queue leading from the ticket office as people bought there tickets for the last ever match at Saltergate against Bournemouth on May 8th 2010. Luckily we have got season tickets already so we are guaranteed seats for that match.

From the first moments of the match Port Vale looked a much better side with the Spireites making a fair few mistakes. Port Vale’s first goal was caused by some poor defending by the Spireites. Robert Taylor ran at the defence without anyone trying to tackle him and he just shot the ball in the net for a 1-0 lead.

Vale continued to dominate with Chesterfield’s only real chance being put wide by Adam Rundle. It was 2-0 just minutes before half time as Marc Richards scored to put the Spireites almost out of sight already.

Chesterfield started the second half slightly better but still poor compared to Port Vale’s hard-working and skillful side. On 51 minutes Richards scored his second with a wonderful shot which smashed the inside of the bar and went in for 3-0. By now I knew that we were dead and buried and all that we could hope for was to minimize to defeat.

That didn’t happen though and it simply got worse, the Spireites didn’t have a shot while Vale continued to push forward. Marc Richards completed his hat-trick on 79 minutes with a goal that left goalkeeper Tommy Lee with no chance from close range.

To add insult to injury Alan Goodall was sent off for bringing down Davies after he had rounded Lee and looked certain to score. He did so however from the spot kick to end it at 5-0.

This was the worst Chesterfield performance I had ever seen, not only was it a 5-0 defeat and the biggest home loss since 1976,  but the Spireites didn’t have a shot on target all game!

After the match I met and got a photo with Port Vale Micky Adams who was obviously very happy.

The legendary spireite Jeff Hall, who does everything for the club. He sells programme's, stewards and even sponsors the corner flags!

The fans queue for Bournemouth tickets... 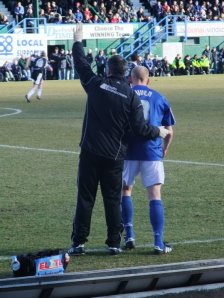 The Vale fans and players celebrate the 2nd of 5 goals

Me with Gary Madine at half time

Davies scores the penalty for 5-0 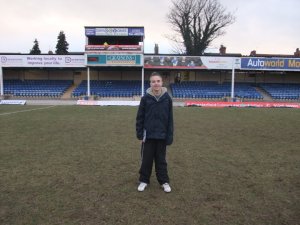 A season ticket from 1906-07 season that was brought in to show us. A fantastic piece of history 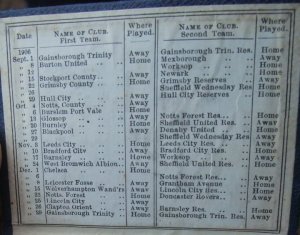