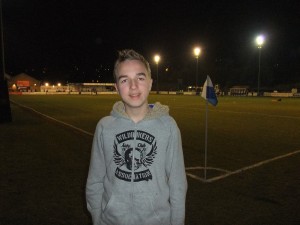 On Tuesday 16th March 2010 I went to Causeway Lane, the home of Matlock Town, to watch them face FC United of Manchester in the Unibond Premier Division.

We arrived at about 7pm with the match due to kick off at 7-45pm, however this was put back 15 minutes due to some of the FCUM team busarriving late after getting caught up in traffic. I had been to Causeway Lane once before back in 2008 just for a ground visit, however since then the stand that we had been shown around which had all the dressing rooms in had been demolished and there was just an empty space.With no seating area on this side the ground felt rather open and therefore I don’t think it was one of the best Unibond League grounds I have visited this season.

We had a wander around the ground taking photos and looking a all the various flags put up by FC United fans which included quite a few green and gold colours and anti ‘Glazers’ slogans.

Only two places, 11th and 13th, seperated Matlock Town and FC United coming into this game. However FCUM had lost their previous game 2-1 to lowly Durham City who had failed to earn a point before that match.

FC United’s Dave Chadwick opened the scoring on 15 minutes with a header straight from a corner which left the Matlock Town goalkeeper with no chance. The goal was well deserved as FC United had been dominating the early stages, with help from there passionate fans who never stopped singing and supported their team brilliantly.

Goalscorer Dave Chadwick was the man at fault as Matlock equalised right before half time. He got the ball on the edge of the area but got caught by Matlock attacker Ross Hannah stole the ball and put it through the legs of FC United goalkeeper to level the scores at half time.

For the second half we decided to stand behind the net that FC United would be shooting towards for a few reasons. One was that the passionate FC United fans were singing non-stop and creating a great atmosphere, and we got a great view of the action in front of that goal.

In the first couple of minutes of the second half, FC United regained the lead through Phil Marsh. Marsh broke through and lobbed the ball right over the Matlock keepers head to make it 2-1, much to the delight of the fans who were singing even louder!

Matlock quickly levelled when Warne side footed the ball into the net after a bit of a scramble in the box. Ross Hannah got his second to put Matlock ahead for the first time in the match. Poor comunication between FCUM goalkeeper and defender left the ball bouncing out of the keeper’s reach and it fell the Hannah who was left with the simple job of putting the ball into the net.

It was 3-3 as the match came towards the closing stages. Jerome Wright had a wonderful crack at the ball from the edge of the area and it flew right into the top right corner to the delight of the majority of the fans.

However Matlock had the last laugh as Matlock’s attacker was brought down in the box by the goalkeeper as he was through to score. Ross Hannah converted the spot kick to get his third and Matlock’s fourth to give them all three points despite FC United’s late efforts to draw level.

I enjoyed my evening at Causeway Lane, the ground was OK and the match was brilliant with a good atmosphere. 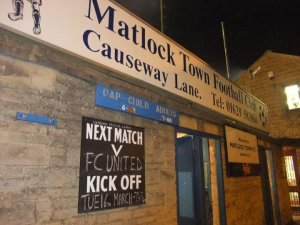 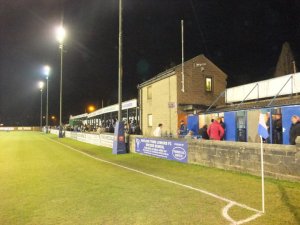 One of the many flags 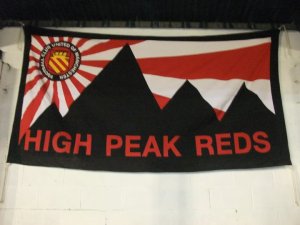 The teams line up before kick off

I watch the action unfold 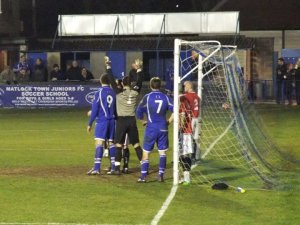 The teams prepare for a corner 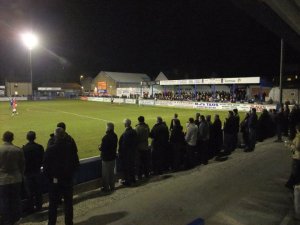 A view from the burger bar 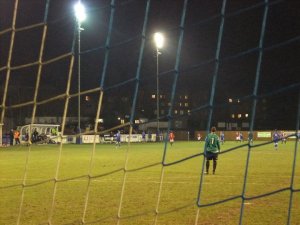 View from behind the net 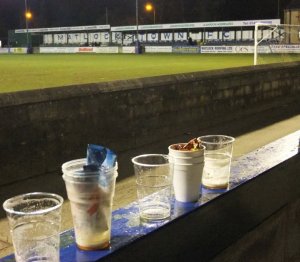