On 27th March 2010 I went to watch KVK Ieper play KSV Oudenaarde in the Belgian 3rd Division. This was the first time I had been to a football match abroad. On 29th March I visited the lost ground, which has been left exactly as it was when they left.

Before going on a 4-day trip to Ieper/Ypres in Belgium for a battlefields tour, which also took us to the Somme, we had searched to see if there was a football team in the town. When we found that there was that they were at home on the Saturday night that we arrived we decided that we couldn’t miss this chance. Despite a long days travelling from Sheffield to Ypres, which began at 4am, we still decided to go to the match and after asking a few directions along the way, we managed to find the ground in plenty of time. After paying €10 each to get in, we entered the ground and had a look at my first ever foreign football ground. The ground was nice, there was a fairly large seating area running down one side, where mostly home fans sat. On the opposite side the was a smaller standing area for the away fans. Surprisingly there was a burger van at the ground, so as we do at alot of ground, we bought a burger. It tasted OK, but different to british ones which don’t use hard crusty rolls. We then went up to the bar area which was full of fans, home and away, drinking and chatting before the game. In there my Dad bought a KVK Ieper pin badge as a souvenir. When I took my seat they look like someone had come and cut them in half. The bottom half of the seats were there but no back rest. The crowd’s began to turn up and there were lots of passionate fans from both Ieper and Oudenaarde (and Sheffield!). The fans were singing and chanting as the players came out for the unusual 7pm Saturday kick off. The attendance was 1,000. The away side looked the better of the first half, creating alot of chances and playing well. Ieper did have chances too, but it was Oudenaarse who took the lead in the first half, much to the dissapointment of the lady sat behind me, who was shouting for alot of the match.   Almost immediatley in the second half, before most fans had even taken there seats, Ieper equalised from a volley into the top corner. Ieper played some better football and didn’t look too bad in the latter stages but the game ended 1-1, which is no good for either side  really as before the game that sat 15th and 16th out of 20 sides. We took the short walk back to the hotel, though despite being quite a long way from Sheffield, the weather was no different as the rain fell. I enjoyed my first ever experience of a foreign football match, the ground was nice and the match was of decent quality. See the photos below, and the report about the old ground below them.   0-1 (Raes ’30) 1-1 (Pecqueux ’47) 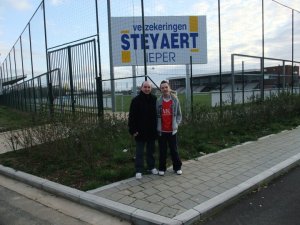 The only Spireites at KVK Ieper! 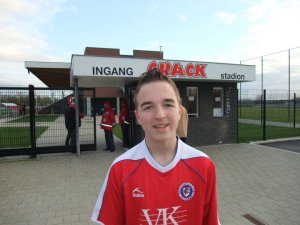 Me at my first Belgian ground

The KVK Ieper team warm up 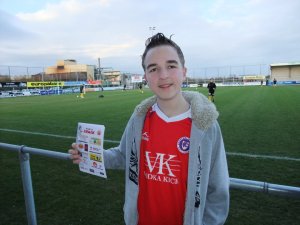 I hold up the programme, which was just a folded sheet with results and tables in

Our view from the stand

Sat in the stand

The teams come out, Ieper in red 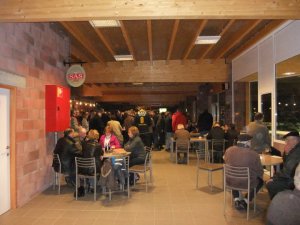 The bar at half time

While looking to see if there was a team in Ieper, we also found out that they had a lost ground so we decided to visit. I don’t know the full details, but they can’t have been gone for very long as the ground was exactly as it would have been if they had been playing. The stands were still there, the scoreboard and even netting was still up! You can see photo’s below. 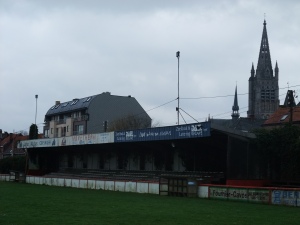 The tower of the cloth hall overlooks the ground

The net and scoreboard 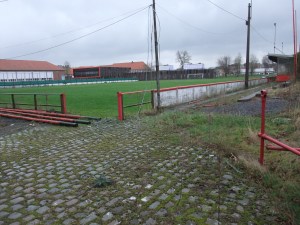