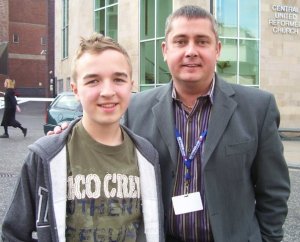 Former professional snooker referee Paul Collier is the latest snooker star to be interviewed on ryan147.com.

Since turning professional in 1991, Paul Collier had a very successful career as a snooker referee.  Paul refereed his first Ranking Event Final in January 2002, the Welsh Open. Then in 2004 Paul was lucky enough to take charge of the 2004 World final between Ronnie O’Sullivan and Graeme Dott at the Crucible Theatre. Sadly at the end of the 2004/05 season Paul gave up being a professional referee, however he still takes charge of the Premier League each year.

Why did you become a professional snooker referee?
I became a pro referee in 1991 because I had refereed some of the top amateur players who told me I was a good referee. Because of this I wanted to take the next step into the professional game and see if I was any good at that level.

Who were your favourite players when you were younger?
I started watching and playing snooker when I was about 12 or 13. My Dad used to take me to the local social club on a Saturday afternoon and I would have a game with the older members. My favourite players then were Ray Reardon, Doug Mountjoy and Steve Davis.

Do you play much yourself?
I haven’t played for almost a year because of my work (I own a Cafe) but used to play regularly and quite seriously in the local league. I have played in several pro-am’s, have won the Newport League 1st Division singles and my highest competitive break is 103.

What is your favourite snooker venue?
My favourite venue has to be the Crucible, although I wish it was a bit bigger, there isn’t a lot of room around the tables especially not at the camera end!
Wembley Conference Centre, sadly no longer standing, was a pretty special venue as well.

You were lucky enough to referee the 2004 World Championship final, how did it feel to get that opportunity? Do you have any other particular matches that you remember well?
Being selected for the 2004 Embassy World Final was a very special moment. I was told in November 2003 that as long as the rest of the season went well I would get the Final and I couldn’t wait. I was only 33 at the time and I think that record of being the youngest referee to do the Final will stick for some time.
My first Ranking final was the Welsh Open in 2002 and that was a great experience for me, my second Welsh Final was a great match too, Ronnie O’Sullivan v Steve Davis where Ronnie came back from 6-8 to win 9-8. The Final I refereed in Beijing where Stephen Hendry lost to Ding Jun Hui when he was just a ‘wild card’ sticks in my memory too, probably because it was watched by over 120 million people on Chinese TV! My first televised match between James Wattana and Danny Fowler in 1993 has some special memories too for obvious reasons. I wish I could still get that suit on !!!

Why did you give up being a professional referee in the end?
I gave up full-time refereeing because I wasn’t happy with the new contract we were offered for the 2005/06 season, it contained yet another pay cut and a massive reduction in expenses for all of us. A friend of mine worked in a Tesco warehouse at the time, worked a 40 hour week, went home to his family every night, didn’t have any pressure or stress in his job and took home £6500 a year more than me!
I also couldn’t deal with one or two of the ‘out of touch’ WSA board members at the time and just decided enough was enough. It was a very hard decision as I love the sport and loved most aspects of the job. I resigned in good spirit though without making any enemies. I left many good friends at World Snooker and have lots of great memories and who knows, one day I may go back…. I’m only 39 !

You do of course still take charge of the Premier League every year, do you enjoy this more than the professional snooker tour?
I love the Premier League! It is a great format played in great spirit in some fabulous venues with excellent crowds. Matchroom Sport are a great organisation to work for and I would be devastated if the League ever came to an end. I do enjoy it more than the Main Tour in some ways but the two really are different beasts. The Main Tour season is a long slog with as many ‘downs’ as ‘ups’ but can be very rewarding. The league is over in 12 days, great fun and probably easier because of the nature of the event. Long may it continue!