On Sunday 27th March 2011 I travelled down to London to visit some of the biggest stadiums in the country, and to watch Brazil vs. Scotland at the Emirates Stadium. This is my report from my visit to the Emirates and the Brazil v Scotland match.

This was actually my second time watching Brazil, the first being back in October last year against Ukraine at Pride Park . However, to see them at the Emirates and against Scotland was a much bigger occasion.

Before heading to the Emirates, we stopped off at Arsenal’s former home Highbury, which is located just around the corner. With most old stadiums that have been converted into flats, if you didn’t go looking for it then you would never know that a stadium used to stand there. However, the Arsenal Stadium was very different. The main stand had been converted into luxury apartments, but the entrance to the old ground was left as the entrance to the flats so you could still easily tell that the ground used to be there and I liked this because it kept a bit of the old ground there rather than getting rid of it completely forever like most old stadiums.

The areas around the stadium were very crowded, packed full of passionate Scottish and Brazilian fans who were all dressed up, singing and enjoying the occasion. It was a beautiful sunny day and the Emirates Stadium looked very impressive from the outside.

We had great seats for the game, right on the halfway line and quite high up too, though one thing I didn’t like too much was that the roof of the stand was slanted downwards, meaning it covered the entire opposite stand and so I could only see the pitch and parts of the two stands behind the goals.

Before kick off football legend Ronaldo came on the pitch to wave to the fans and meet the Brazilian squad after his recent retirement. Ronaldo played many world class clubs in his career, including PSV, Barcelona, Inter Milan, Real Madrid, AC Milan before ending his career at Corinthians. However, his international career is what he is most famous for. He won the World Cup in 2002, and in 2006 he broke the record for the most goals scored in World Cup history, overtaking Germany’s Gerd Muller. It was great to see him in real life, even if it was from such a distance, and I have now seen two Brazilian legends in real life, the first being Pele at Sheffield FC’s 150th Anniversary game against Inter Milan.

Straight from kick off, Brazil looked the much superior side. They kept the ball so calmly and were very skillful with it. After many chances in the first half, Brazil’s Neymar put the ball neatly in the bottom corner on the 42nd minute to give Brazil a much deserved half time lead.

It was the same again the second half, and Neymar got his and Brazil’s second goal from the penalty spot to guarantee Brazil a much deserved victory.

Despite the defeat, the Scottish fans were in good spirit and sang all the way through the match, as did the Brazil fans, and there was a nice friendly atmosphere in the stands throughout the game.

After the game we stayed behind to get a few more pictures, and then slowly headed back to the car with the thousands of fans ready to visit some more London grounds before setting off home.

Outside the entrance to Arsenal's old home Highbury

The stand has been converted into flats

Scottish and Brazilian fans enjoy a drink before the match

One of many merchandise stalls 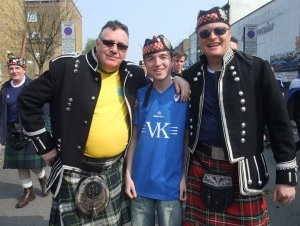 With some Scottish fans 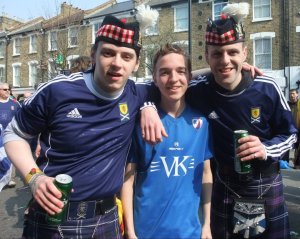 Thousands of fans surround the stadium

with some colourful Brazil fans

and some more Brazil fans!

I hold up the match programme 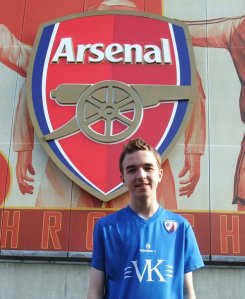 Outside the Emirates Stadium

Inside the Emirates Stadium!

The players sing their national anthems 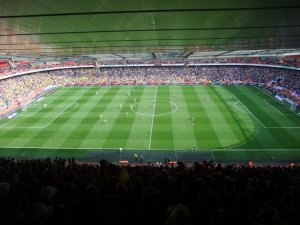 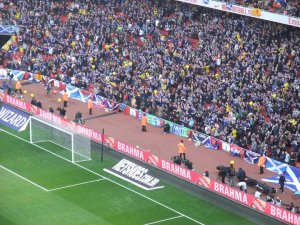 Fans behind the goal 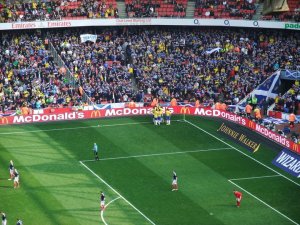 Fans near us celebrate Brazil's lead

Brazil 1-0 Scotland at half time 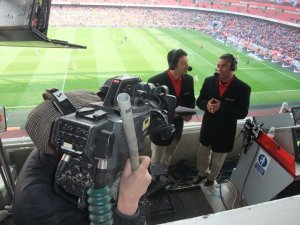 Media reporting at half time

Representing the Spireites at the Emirates

Neymar makes it 2-0 from the penalty spot 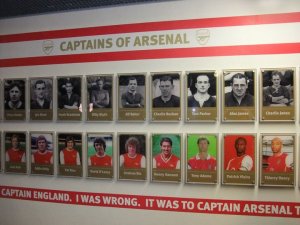 Pictures of all the Captains of Arsenal over the years...

Brazil and Scotland fans pose for photos after the match 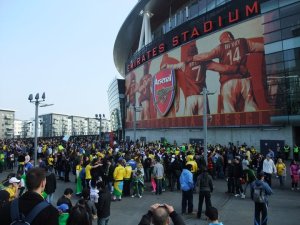 One last shot of the Emirates