On Sunday 22nd April I was at the Crucible Theatre watching Mark Allen play Cao Yupeng in the World Snooker Championship.

After going to the football on the opening day, today was my first visit of the year for the World Snooker Championships. I have been to the Crucible every year since 2005, and I also went in 2001 to watch Paul Hunter play. This year will be no different and I will be down for quite a few matches over the tournament.

As we arrived, the game between Martin Gould and David Gilbert was reaching a conclusion and so we decided to watch the end of the match on the big screen in Tudor Square. Gilbert had led 9-5, but Gould had made a comeback winning the next 3 to make the scores 9-8. However, the qualifier managed to hold himself together in the 18th frame to knock in a half century break and book his place in the second round for the first ever time.

Not long after the match had finished, I saw David Gilbert walking up Tudor Square and so I had a picture with him. I also met Luca Brecel, who had played in the morning against Stephen Maguire and in doing so, he had become the youngest ever player to compete at the Crucible.

We wandered around for a while, going in to the Winter Gardens to have a look at the set up, which is the same as it has been for the past couple of years with the BBC studio and a table behind where members of the public can try their hand at various challenges. We also chatted to some of the Crucible regulars including Chris (aka The Statman) and Kellie among others before heading in to the venue for the first time this year.

We were watching the second session of Mark Allen against Chinese debutant Cao Yupeng. At times early on in the game it had looked as if Yupeng may run away with the match, having lead 3-0 and 5-2, but Allen had managed to win the last 2 frames of the opening session to leave the game perfectly poised.

On the other table was another debutant, Jamie Jones, playing against 2005 World Champion Shaun Murphy in their opening session of the match. From our seats, we could see both tables although I was more interested in Allen vs. Yupeng game to a conclusion.

The Chinese player settled in to the second session quickest, winning the first two frames including a break of 108, to lead 7-4. The World number 11 pulled a frame back, but Yupeng took the last before the interval to lead 8-5.

After the interval Yupeng increased his advantage with another century break to make the score 9-5 and a shock looked on the cards. However, Allen began his fight back with a century of his own, and he looked to have made it 9-7 when he held his nerve to clear the table. However, after potting the black and punching the air, Allen turned around and noticed the cue ball heading towards the top left pocket. There was a moment of silence in the crowd as the ball dropped in to the pocket, handing Yupeng the biggest win of his career.

It was a very dramatic ending to the match and Allen was visibly disappointed, but overall Cao Yupeng had deserved the 10-6 victory and he will now play either Ding Junhui or Ryan Day in the second round.

Over on the other table, Jones took the first frame and led again at 2-1. Shaun Murphy took the next 2 frames to lead for the first time at 3-2 and the next 4 frames were shared to make the score 5-4 to Murphy.

After the afternoon session ended, we had another walk around the Crucible for a short time while the rain held off. During this time I had a picture with Mark Allen, who was very friendly despite having just lost. I also met Cao Yupeng after his victory and another young Chinese qualifier Liu Chuang, who plays Mark Williams later in the week. TV presenter Richard Osman was also in attendance and I had a picture with him as well as MC Lloyd Davies, who was standing in for Rob Walker today and was telling us how he was delighted to be a part of the World Championships this year.

We then decided it was time to head home at the end of a good day at the Crucible. I won’t have long until my next trip to the venue as we return on Tuesday. 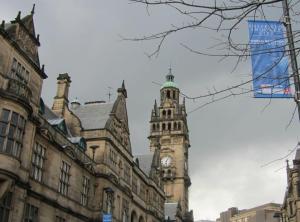 Back at the Crucible for my 7th consecutive year

Looking towards the Winter Gardens from Tudor Square

In front of the Winter Gardens 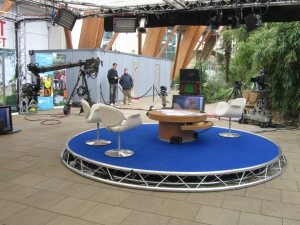 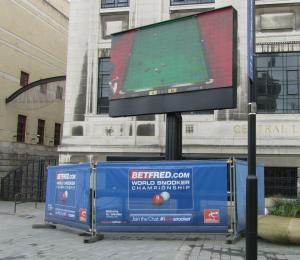 with Luca Brecel, who at 17 years old is the youngest player to ever play at the Crucible Theatre.

My Dad, Chris (AKA The Statman), me and Kellie

with David Gilbert after his first round victory over Martin Gould

The top of the famous old trophy 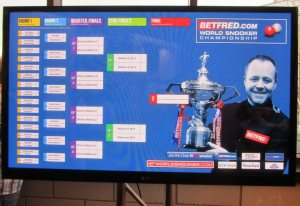 The draw, with John Higgins and David Gilbert having already booked their place in the second round

The home of Snooker

Our view of the table 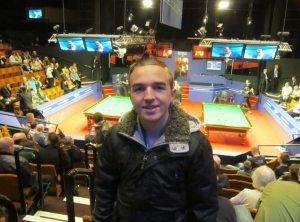 Terry Griffiths and John Virgo in the commentary box

Michaela Tabb is the scorer for the Allen v Yupeng match 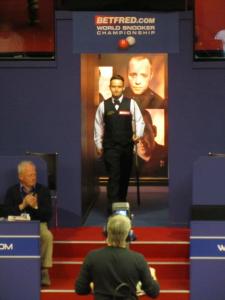 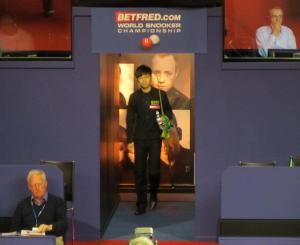 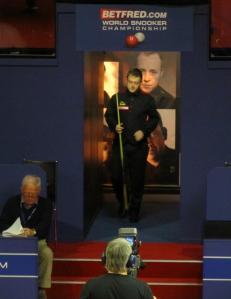 In the foyer at the interval

The rain pours in Sheffield

Me and my Dad with Crucible regular Brian Wright

Me and my Dad with Snooker lover Janie 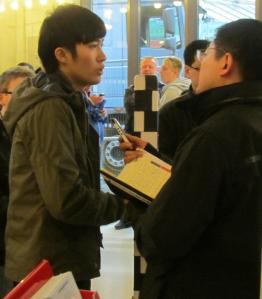 Cao Yupeng talks about his victory over Mark Allen 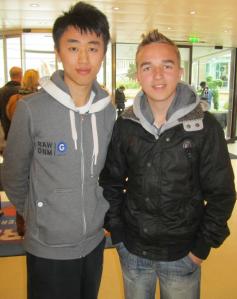 with Liu Chuang, who plays Mark Williams later in the week 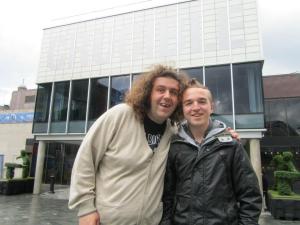 Hairbear has his yearly photo!

Richard Osman, who is the co-presenter on quiz show 'Pointless' 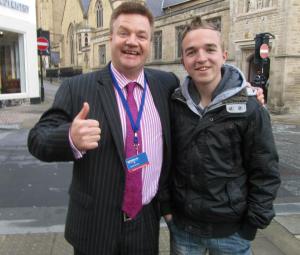 MC Lloyd Davies enjoyed his day at the snooker!