On Saturday 4th August 2012 I visited the Keepmoat Stadium to watch a Friendly match between Doncaster Rovers and Barnsley.

With it being such a lovely sunny day, we decided to make the short journey to Doncaster for their friendly match against local rivals Barnsley. I had visited the Keepmoat Stadium once before back in 2007 when we were allowed in to take some photos, but I had never seen a game at the ground and so this was a perfect opportunity.

We arrived around 45 minutes before kick off, bought a programme and tickets for the game. After walking around the ground and having a look in the club shop, we headed through the turnstiles and took our seats in the West Stand.

Rovers moved to the 15,000 all-seated stadium in 2007 after playing at Belle Vue for 84 years. The stadium is very modern having been built only a few years ago and has the bowl design that many recently built stadiums have with 4 identical sides. You certainly get a great view of the action no matter where you are sat in the stadium and we were sat in the centre of the West Stand which meant we got an excellent view of both nets.

The Keepmoat was rather empty for today’s game, with an attendance of just 2,913. However, this wasn’t too much of a surprise as it is the middle of summer and pre season games aren’t often very well attended.

It was Barnsley who had the first shot on goal early in the game when Kelvin Etuhu’s long range effort was stopped by Rovers goalkeeper Gary Woods. Woods was called in to action again soon after when a low cross flew towards goal and he blocked it with his feet to send the ball out for a corner.

It was the home side who scored first, taking the lead in the 13th minute when Martin Woods cut inside on the edge of the area and fired a low shot in to the bottom corner.

The Rovers goalkeeper almost gifted an equaliser to Barnsley soon after when he spilled a simple cross and almost dropped the ball in to the path of Craig Davies, but the ‘keeper managed to grab the ball before anything came of it.

Doncaster nearly doubled their lead when Chris Brown had a free header in front of goal, but he was facing the wrong direction when the ball arrived and he couldn’t get his effort on target.

It was 1-1 on the 25th minute when Rob Jones scored his second own goal in as many games to level the score. Stephen Foster turned inside the area and played a low cross in front of goal which Jones inadvertently directed in to the empty net.

The game was very close in the first half and both sides came close to scoring again as the half came to a close. First, Doncaster’s Kyle Bennett curled a free kick just past the post before Craig Davies’ first time volley in front of goal was mistimed and went wide of the target. Despite these chances, the sides went in at the break with the score level.

The Tykes dominated the early stages of the second half and star striker Davies had a few chances to give the visitors the lead. At the start of the half, Matty Done broke through and had his shot blocked by the goalkeeper before Davies hit the rebound straight in to the ‘keeper’s arms.

The Wales international continued to find space and he broke through twice more, once putting the ball in to the side netting before he poked another effort just past the far post.

Finally, with just under 20 minutes to go, Davies gave Barnsley the lead for the first time in the game. Jim O’Brien played a perfectly waited pass to the striker, who calmly fired the ball past the incoming goalkeeper.

However, Doncaster hit straight back and they were level again just 6 minutes later. A corner was whipped in, flew over the Barnsley goalkeeper and found David Syers at the far post who volleyed the ball in to the open goal to make the score 2-2.

After this goal, there was no clear chances for either side as both teams seemed to settle for a draw and this is how the game ended.

I enjoyed seeing my first game at the Keepmoat Stadium today. The match itself was entertaining with 4 goals and plenty of action. A good day all round. 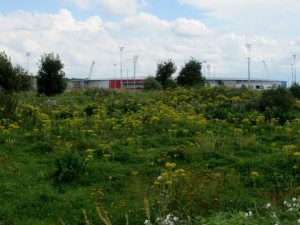 I hold up the matchday programme outside the ground

The queue at the ticket office before the game

The TV gantry in the West Stand

The official photographs are taken before the match 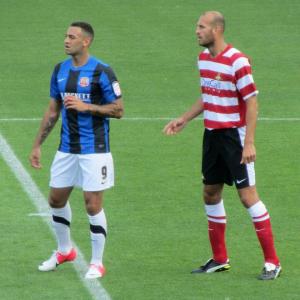 Barnsley get the game back underway 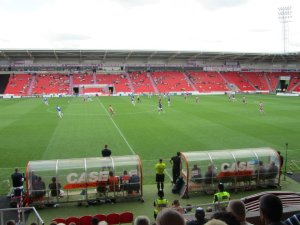 Rob Jones levels the score with an own goal 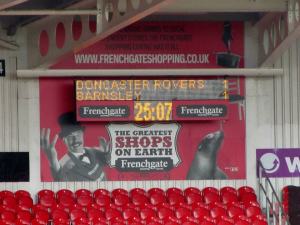 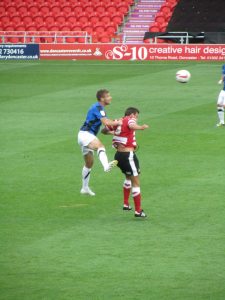 Two players battle for the ball

The players head for the dressing rooms at half time

Some flags on the Barnsley end

Some of the many empty seats in the ground! 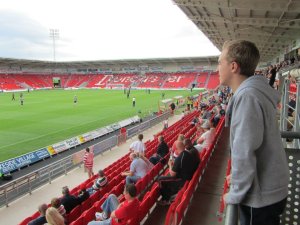 I look over the ground at half time

Donny Dog waves to the supporters

Barnsley kick off the second half

Keith Hill has a laugh with the home supporters 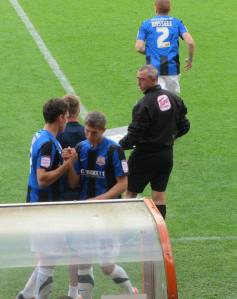 Both sides continue to make substitutions throughout the game

Rob Jones is replaced after hurting his leg 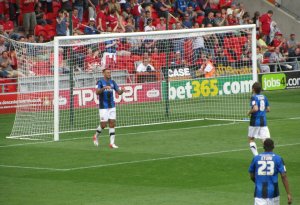 Craig Davies makes it 2-1 to the visitors 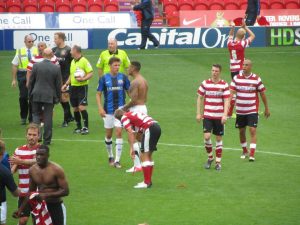 The players shake hands after a 2-2 draw 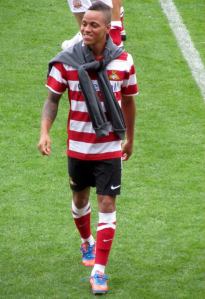