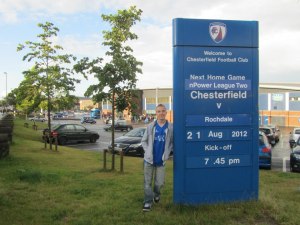 On Tuesday 21st August 2012 I went to the newly named Proact Stadium to watch Chesterfield’s first home game of the 2012/13 season against Rochdale.

Coming in to today’s game, both sides were still looking for their first victories of the new season. The Spireites had been defeated 1-0 away to AFC Wimbledon on the opening day of the season, courtesy of a goal from Jack Midson, while Dale had been held to a goalless draw by Northampton Town at Spotland. Chesterfield had been predicted as one of the favourites for promotion back to League 1 while Rochdale were also one of the sides looking to bounce back at the first attempt and so 3 points today were important to kick start the campaign.

The Spireites had been busy over the summer and four new signings, Terrell Forbes, Sam Hird, Sam Togwel and Marc Richards, were all in the starting line up. Rochdale named an unchanged side to the one that drew with Northampton, which included veteran striker Dele Adebola leading the attack.

The stadium ws disappointingly empty with an attendance of just 4,595, one of the lowest for a league game at the new stadium. However, it was a Tuesday night match early in the season and so this may explain the lower attandance and hopefully the numbers will increase as the season continues.

The early stages of the match were action packed with both sides having chances. The home side had two chances cleared off the line in the opening 10 minutes, with Jordan Bowery’s shot being cleared by Ryan Edwards before former Dale defender Neal Trotman saw his header also blocked on the line.

Rochdale striker Adebola then had a great chance to give his side the lead when he found himself one on one with goalkeeper Tommy Lee, but his poor effort went wide of the target.

Both teams continued to have chances but neither could break the deadlock in the opening 45 minutes. Mark Randall played new signing Richards through with a wonderful ball, but goakpeer Josh Lillis charged out and blocked the opportunity. At the other end, Matty Pearson’s low shot from the edge of area was stopped by Tommy Lee and the half ended level.

The visitors started the second period brightest and Andrew Tutte opened the scoring on the 49th minute with a magnificent strike from around 25 yards. The ball flew past Tommy Lee and in to the top corner before Tutte sprinted over to the dugout to celebrate. Rochdale continued to play well and Ashley Grimes came close to doubling the lead with an effort that flew just wide of the post.

The Spireites desperatley needed a lift and this came when cub legend Jack Lester was brought on just after the hour mark to replace Richards. After this substitution, the home side began charging forward in search of an equaliser and they very nearly got it when Danny Whitaker’s dangerous cross bounced in front of goal but no one could get their head on the ball and it bounced wide of the target.

Lester created a couple of brilliant opportunities for young striker Bowery, who first saw his lobbed effort once again cleared off the line by Ryan Edwards before his point blank shot in the final moments of the game was tipped over the crossbar by Lillis.

It looked like it was all over for the home side, but in stoppage time Craig Westcarr whipped a corner into the box and found the head of Lester at the near post. The veteran striker wasn’t going to miss and he put the ball in to the net to salvage a point for the Spireites. It was almost a carbon copy of the opening home game of last season when Lester had salavaged a point with a header in the final minute against Stevenage.

The game was entertaining but while it was good to get a draw in the final minute of the game, it wasn’t the start that Chesterfield fans had been hoping for with just a single point from a possible 6 and a tough game against local rivals Rotherham United coming up at the weekend.

After the game I met Chesterfield’s new striker Marc Richards and Rochdale’s Dele Adebola and Phil Edwards before heading home.

Back for the new season

A rainbow over the Proact Stadium 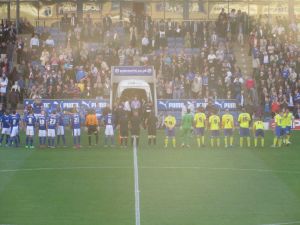 The two teams line up ahead of kick off 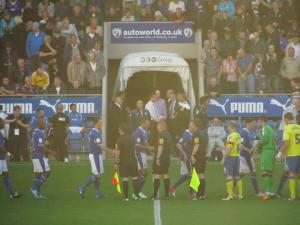 The Chesterfield team prepare for kick off 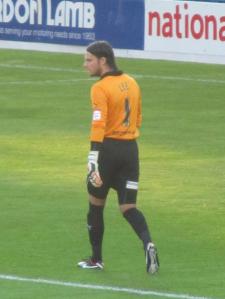 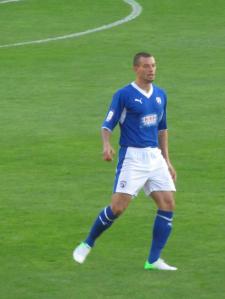 The Chesterfield defenders have a discussion 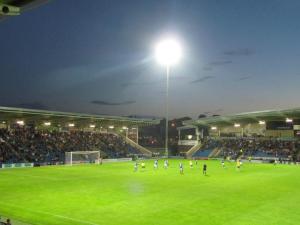 The floodlights shine over the Proact Stadium 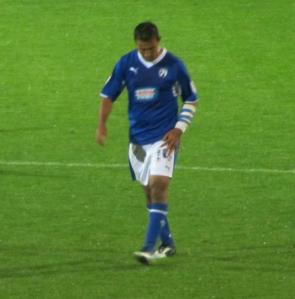 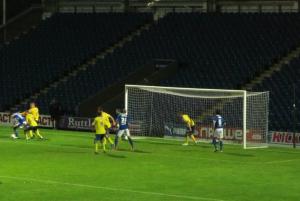 A late attack from the Spireites 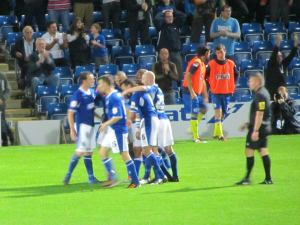 A stoppage time header from Lester salvages a point for Chesterfield 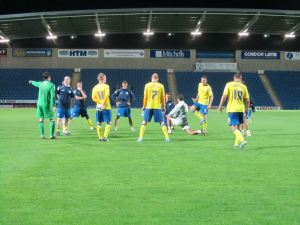 The Rochdale players warm down after the game 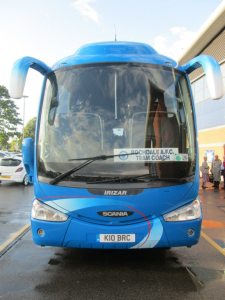 The away team coach 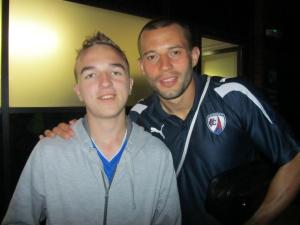 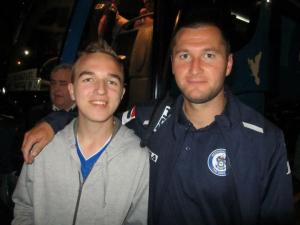