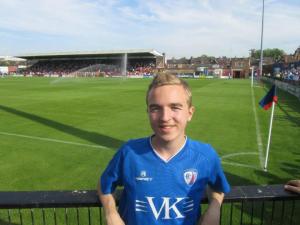 I had visited Bootham Crescent once before on 29th March 2008 to watch them play Ebbsfleet United in the Conference. York had been defeated 1-0 that day and it wasn’t the most enjoyable day due to awful weather conditions. We decided that it would be our first away game of the season.

We had planned to spend a couple of hours in York, which is a beautiful city, before the game and so me, my Dad Mark, Andy and his two sons Michael and Chris had all set off quite early in order to arrive in plenty of time. However, we hadn’t even made it out of Sheffield when we noticed smoke coming from the car. There was a problem with the brakes and so we had to spend over 2 hours at a nearby Kwik-Fit to get the car fixed. While this meant the day out in York was cancelled, we set off at around 1:45 still expecting to make it to the game.

The drive to York went smoothly and we arrived in the city centre with around 20 minutes until kick off, but the traffic was horrendous and as the ground is tightly packed in amongst terraced houses, we had a lot of trouble finding a place to park the car. By the time we made our way through the turnstiles, the match had already been going for 21 minutes!

Fortunately for us, there had been no goals during this time although Drew Talbot had hit the crossbar for Chesterfield early in the match.

A lot had changed at Chesterfield FC since the last game that we had seen. Manager John Sheridan had been sacked after a poor start to the season, while striker Jordan Bowery had made a surprise move to Aston Villa on transfer deadline day. Caretaker manager Tommy Wright had handed league debuts to Jacob Hazel and Richard O’Donnell, who replaced the injured Tommy Lee in net, for today’s game.

Chesterfield came in to the match with just 3 points from 4 games and still without a victory in the league this season so a win today against newly promoted York City was vital. However, the Minstermen had made a steady start to the new campaign having won their last two league games against Barnet and Wycombe Wanderers.

The away end at Bootham Crescent was packed with Chesterfield supporters, with a total of 1,444 making the short journey to York. Despite our late arrival, we managed to find a good place to stand on the open terrace and we had a good view of the action.

Sam Hird’s first goal for the Spireites gave the visitors the lead on the 36th minute. Marc Richards’ header was well saved by ‘keeper Michael Ingham but the ball fell straight in to the path of Hird, who poked the ball in to the empty net to make it 1-0.

The Minstermen almost levelled immediatley when Michael Coulson’s free kick forced a good save out of O’Donnell. It was Coulson who put the home side level on the 40th minute when Jason Walker’s pass left him through on goal and he lobbed the ball over the goalkeeper and in to the back of the net.

However, Craig Westcarr, who had just returned from suspension, regained the Spireites’ lead just a minute later when he charged through on goal and calmly slotted the ball past the on rushing Ingham.

The second half was quiet with few great opportunites for either side. Clarke Carlisle headed wide of the target for York as they pushed for an equaliser, while Neal Trotman looked to have come close at the other end but the referee decided that he had fouled his marker as he went up for the header.

As the fourth official showed the 4 minutes of added time the Spireites looked in little danger of losing their lead as they attempted to run down the clock. However, in the 5th minute of stoppage time the ball fell to Walker in the area and his volleyed effort flew in to the top corner to snatch a point right at the end. It was very frustrating as the referee had announced 4 minutes of added time and then York had scored in the 5th minute, despite there being no other stoppages during this time. However, it was a magnificent goal from Walker that left the Spireites still without a league victory this season. 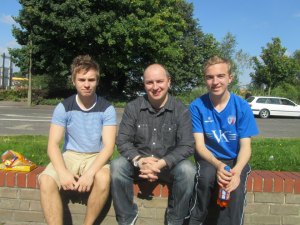 Michael, my Dad Mark and Me outside Kwik Fit 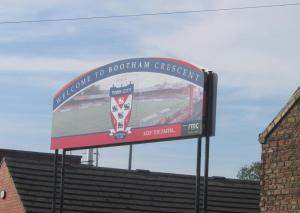 The view from the back of the the away end

The away end is packed

The Watterson’s at Bootham Crescent

Stood in front of the away end

Our view of the pitch 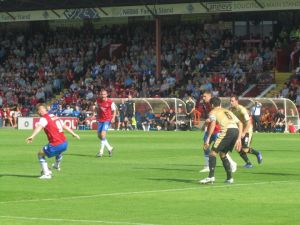 A photographer at pitchside 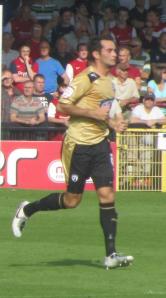 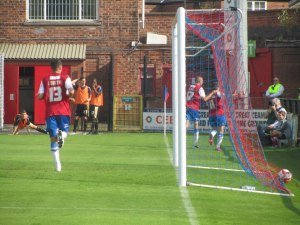 The travelling supporters celebrate the goal

The corner of the Popular Side 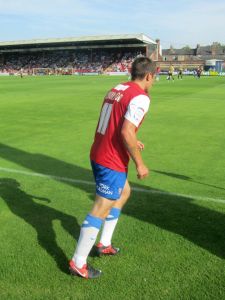 The corner kick is cleared 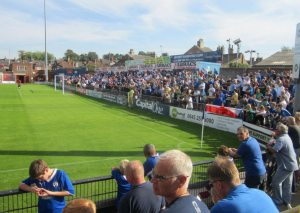 The view from the corner of the away end 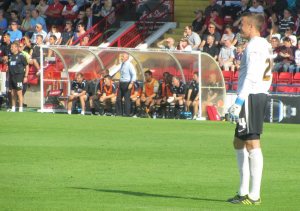 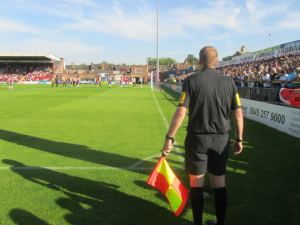 The linesman’s view of the game

Craig Westcarr comes across to take a corner

Westcarr takes a corner for Chesterfield

Craig Clay and Jack Lester prepare to come on

The Chesterfield defenders try to hold on to the lead 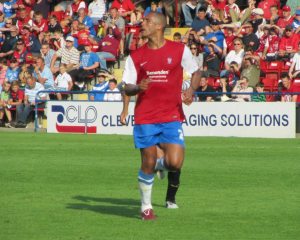 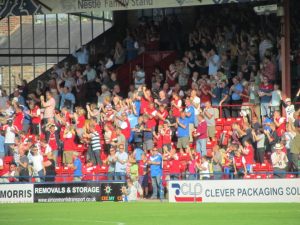 The home fans celebrate the goal

I reflect on a disappointing end to the game

Outside the entrance after the match

Walking away from the ground 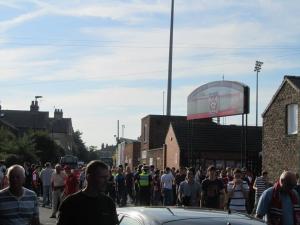 Fans of both sides leave the ground

York Minster pokes out over the rooftops