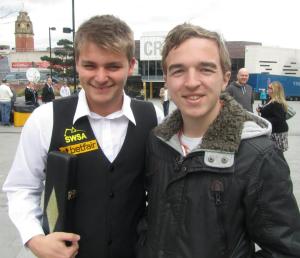 On Sunday 21st April 2013, I went to the Crucible Theatre to watch John Higgins play Mark Davis in the first round of the World Championship.

For the ninth consecutive year I returned to the Crucible Theatre to get my first taste of the 2013 World Championships. I have had many great memories of the championships over the years and I have been lucky enough to see five finals, watch some of the greatest players compete and even meet many of them! My Dad had been down the previous day to watch the opening session of Ricky Walden v Michael Holt and also witness the return of Ronnie O’Sullivan, who received an incredible reception from the Crucible crowd. However, this was my first visit of this years tournament and I was very excited to be back.

It was a lovely sunny day in Sheffield, as is often the case on the opening weekend of the Snooker, and we some time wandering around Tudor Square and the Winter Gardens to soak up the unique atmosphere of the World Snooker. During this time we bumped in to reigning World Open champion Mark Allen, who is always very friendly, shaking my hand and being more than happy to have a photo. I also had photos with former World Champion Ken Doherty and Crucible debutant Michael White ahead of his match against Mark Williams before heading in to the venue and taking our seats on row B.

This Sunday afternoon session saw four times World Champion John Higgins take on Mark Davis on the table I was watching, while it was an all-Welsh affair on the other with Mark Williams taking on Michael White, a game in which the former World Champion was currently trailing 5-4. MC Rob Walker made sure that the atmosphere was electric as the players al made their entrance and the action then got underway.

Higgins took an early lead with a break of 61 and quickly moved 2-0 ahead. However, Davis, who was forced to qualify for the tournament despite his 16th place ranking because of the return of the Rocket, hit back in tremendous fashion. Breaks of 68, 85 and 69 from the Englishman saw him take a 3-2 lead before Higgins levelled with yet another half century.

It was an excellent standard of snooker with some top quality play from both players in both the safety and break building departments. However, after it being neck-in-neck for the opening six frames, Davis began to pull away.  He took a scrappy seventh frame and then followed it up with break of 96 and 64 to come away with a 6-3 lead.

Meanwhile, the story of the day came from the other table as 21 year old Michael White defeated the world number 10. Williams took the first frame of the session to level at 5-5, but the youngster remained calm as he won the next three to go in at the interval 8-5 ahead. Williams reduced the deficit to two but the debutant never looked phased breaks of 90 and 96 saw him run out a 10-6 winner.

After spending a short time outside the venue and talking to some of the regular snooker fans that we have got to know over the years, we headed home. We don’t have long to wait until our return though as we are back on Wednesday evening for the opening session of the game between Stuart Bingham and Sam Baird. 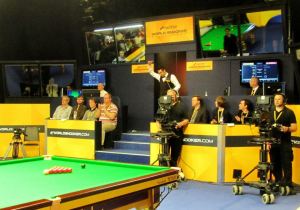 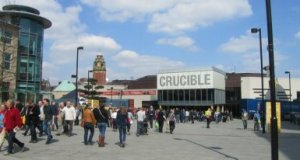 A sunny day in Sheffield

John Parrott and Steve Davis in the studio

Back at the Crucible for my 9th consecutive tournament

The Crucible Theatre – home of Snooker since 1977

Sat with the trophy 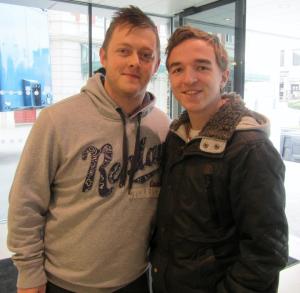 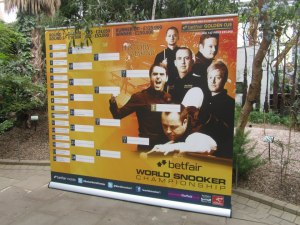 The tournament draw in the cuezone 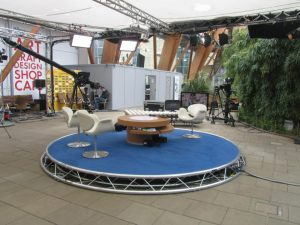 Behind the scenes in the studio 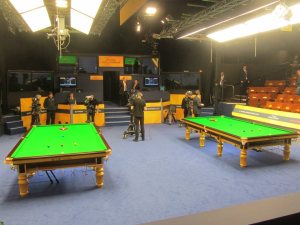 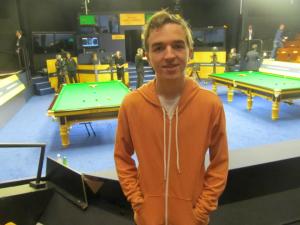 Stood in the venue 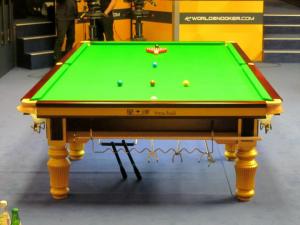 My view of the table

Sat in my seat 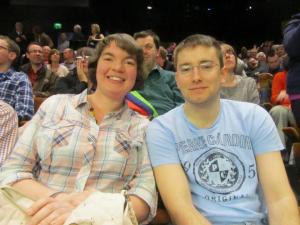 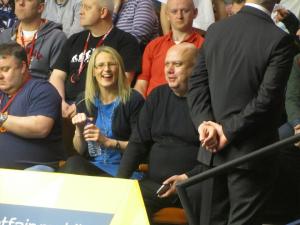 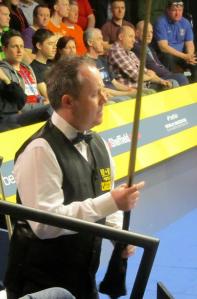 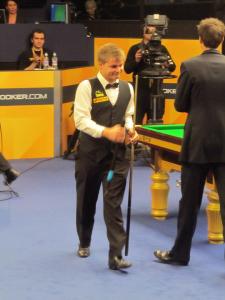 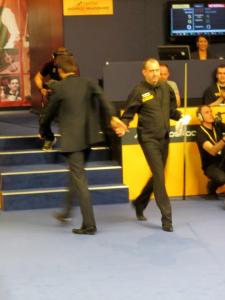 The order of play

In the foyer during the interval