On Tuesday 13th August 2013, I went to Bramall Lane to watch an under-21 international friendly between England and Scotland.

The day before the full international friendly between England and Scotland at Wembley, the under 21 sides competed at Bramall Lane. As the home of the Blades is just a short distance from where I live, we couldn’t turn down this opportunity to see the two rivalling nations face off and so we headed to the Lane for the match.

Bramall Lane has had quite an extraordinary history with the England Under 21’s over the years. The side have twice lifted the UEFA Championship trophy at the ground in 1982, beating West Germany 5-4 on aggregate, and again in 1984 when they beat Spain 3-0 over two legs. The first ever under-21 match at this ground had been between England and Scotland, the home side winning 1-0. This wasn’t the first time I had seen international action here either as I had been in attendance for the 2-0 victory over Czech Republic in 2008.

Despite the history of the under-21’s here, in more recent years the team had struggled. England had travelled to Israel for the 2013 UEFA Championship with high hopes of reaching the latter stages. However, defeats to Italy, Norway and finally a humiliating 1-0 loss at the hands of the hosts Israel had seen the ‘three lions’ finish bottom of their group with no points. This dismal showing from the England youngsters had seen manager Stuart Pearce relieved of his duties and so tonight we were witnessing a piece of history as England boss Roy Hodgson took charge as caretaker boss of the under-21’s.

The special guest at this evenings game was the brother of former England international Laurie Cunningham. This was to mark the fact that he was the first black player to score for England at any level, a moment which came when he found the net for the under-21’s in a game against Wales at Bramall Lane in 1978. As well as representing his country six times, Cunningham played for many great clubs such as West Brom, Real Madrid, Manchester United and Marseille before he was tragically killed in 1989 in a car accident, aged just 33.

The players made their way on to the pitch and lined up for the national anthems, both of which were respectfully acknowledged by the two sets of supporters. The England starting eleven boasted three players who had played for England’s full side – Jack Butland, Jonjo Shelvey and Raheem Stering while the Scotland team had no players with international first team experience.

And this difference in experience showed immediately as England got off to the perfect start. In the 3rd minute, a long ball forward from Jonjo Shelvey cut through the defence and found Nathan Redmond, who poked the ball past the on-rushing goalkeeper to put the home side ahead and score his first ever goal at this level.

The defence was split in half again soon after as Raheem Sterling found 18 year old Will Hughes, but the Derby player couldn’t find the target. At the other end, Scotland’s first opportunity of the contest came when Jack Butland – who has represented at every level from under-16’s as well as Great Britain – spilled a corner but Clark Robertson could only send his resulting header wide.

Connor Wickham sent a strike just wide of the far post before England’s lead was doubled by Sterling seven minutes before half time. Redmond turned from scorer to provider as he played a ball to the Liverpool youngster, who composed himself before calmly firing the ball home.

And at the start of the second half England put the game well beyond doubt with four goals in a brilliant 12 minute spell. It was 3-0 just four minutes after the restart with a goal that came in bizarre fashion. Redmond, who had been causing real problems for the Scots, forced another save from Jordan Archer but the keepers seemingly comfortable throw was met by Wickham and he cheekily lobbed the ball over the keeper from the edge of the box.

A neat one-two between Wickham and Ross Barkley led to the Everton man scoring the fourth, before just a minute later an absolutely outstanding effort from Shelvey flew into the top corner leaving the keeper with no chance as the scoreboard changed to 5-0.

Sterling came close to grabbing his second when he picked up a deflected Hughes effort but he could only send the ball wide. But the scoring rout continued just after the hour when substitute Tom Carroll hit a first time shot past Archer to make it six. Fellow sub Harry Kane came close to adding another when his shot flew just over the crossbar but England couldn’t add to their total as the game was played out and it ended 6-0.

It was a fantastic performance by the England under-21’s, who had left Scotland feeling rather humiliated and simply hoping that the full international the following day would not see a similar scoreline! For me personally it was an entertaining evening and it is always nice to see England defeat Scotland at any level, particularly by such a large margin! 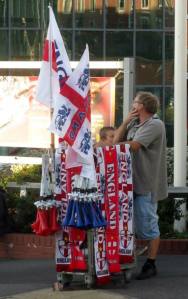 England merchandise on sale outside the ground 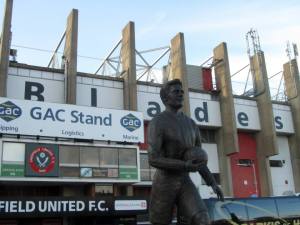 The statue of United legend Joe Shaw outside Bramall Lane 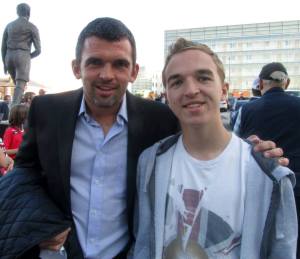 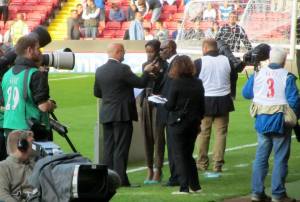 Laurie Cunningham’s brother was the special guest at tonight’s match.
It was in respect of the fact that Cunningham was the first black player at any level to score a goal for England at Bramall Lane v Wales in 1977. 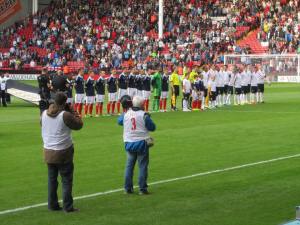 The teams line up on the pitch

The England players stand for their national anthem 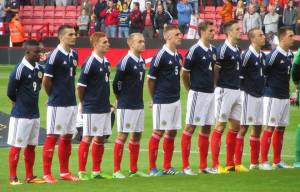 The Scots sing their anthem 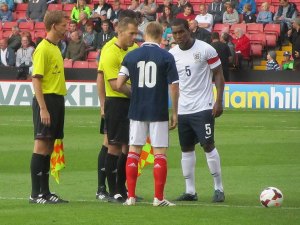 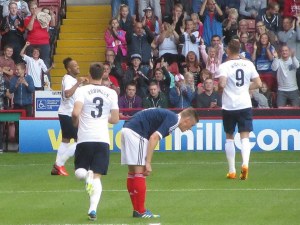 Hodgson stands on the touchline 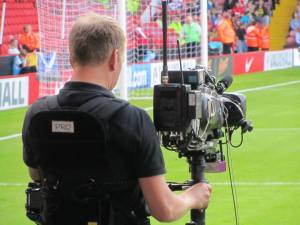 A cameraman on the touchline

The Scottish keeper makes a save 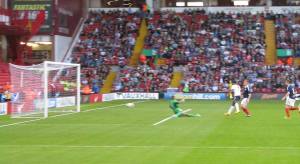 The England players celebrate another goal 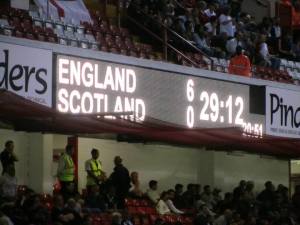 Inside the home of Sheffield United 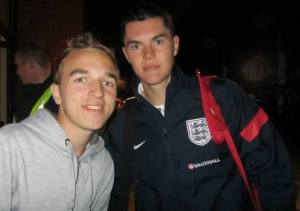 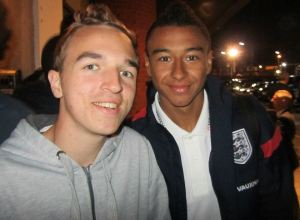