On Saturday 24th August 2013, I went to the Proact Stadium to watch Chesterfield play unbeaten Southend United in League 2.

Both Chesterfield and today’s opponents Southend United came into this game still unbeaten in League 2. After wins against Bury and Cheltenham, the Spireites had come from behind to earn a 2-2 draw at Rochdale last week. The Shrimpers sat in second in the table with a 100% league record still in tact and still yet to concede a goal. For both teams, this was probably their biggest test of the campaign so far with the two hoping to push for promotion to the third tier this season.

Spireites manager Paul Cook made one change from the trip to Spotland, Liam Cooper taking the place of loanee Ryan Edwards in the heart of the defence. For the visitors, Paul Brown also made just a single change after a comfortable 2-0 home win against Northampton Town last Saturday. Conor Clifford was handed his first league start for Southend replacing Marc Laird in the starting eleven.

The game began in front of just over five and a half thousand supporters and it was the home side that controlled the majority of the first half. Marc Richards had an early opportunity when he took the ball past onrushing goalkeeper Daniel Bentley, but the striker was unable to convert the chance from such a tight angle.

Chesterfield again went forward in search of an early advantage and Ritchie Humphreys sent a free header from inside the box well over the woodwork. Jay O’Shea forced the first save from the Shrimpers ‘keeper when he struck a shot from outside the area that Bentley had to be at full stretch to keep out.

Southend rarely looked like threatening in the first 45 minutes, Clifford’s deflected shot over the crossbar about as close as the Shrimpers came to finding the net in this period.

It took until just shy of the hour mark for the games first goal as Gary Roberts’ fired a free kick home to put the Spireites ahead. A number of players stood over the ball but it was Roberts who hit a beautiful curling strike which left the keeper with no chance.

But just 12 minutes later, muchagainst the run of play, the Shrimpers were back in it. The ball fell to former Spireite Kevan Hurst and he poked the ball to Freddie Eastwood who blasted the ball past Tommy Lee before charging away to celebrate with the joyous travelling supporters.

Another direct free kick almost led to Chesterfield scoring their second. Again it was Roberts who took the strike but this time Bentley was equal to it as he dived low and palmed the ball away from danger.

It was now end to end stuff and the game became far more open as both sides search for a winner. A goalmouth scramble for Southend led to Luke Prosser having two shots in quick succession blocked before the ball was finally cleared.

In stoppage time, Sam Morsy picked up the ball on the edge of the box and after taking a touch, curled a shot goalwards that forced the keeper to make another diving save.From the resulting corner, substitute Armand Gnanduillet managed to jump highest and power the ball home to send the Chesterfield supporters into wild celebration.

The injury time winner saw Southend’s 100% league record brought to an end and resulted in the Shrimpers slipping to 4th in the table. The three points moved the Spireites up to second place with 10 points from 12, and only behind table toppers Oxford on goal difference. 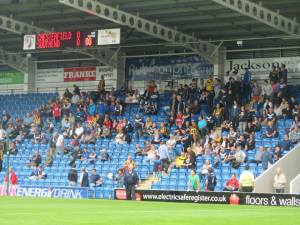 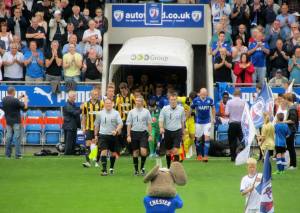 The players make their way onto the pitch 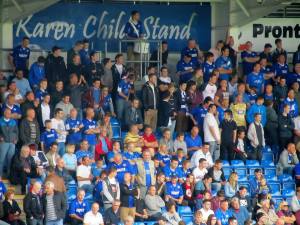 Line up on the pitch prior to kick off 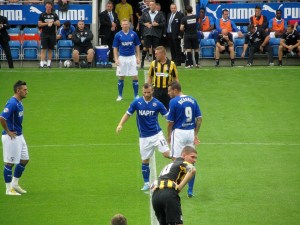 Phil Brown shouts from the touchline

Southend attack from a set piece 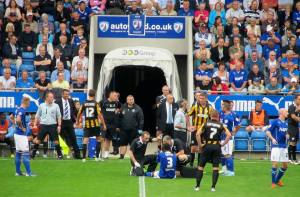 Talbot and Corr battle for posession

Southend start the second half

Will Atkinson is challenged Nathan Smith 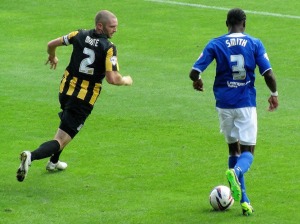 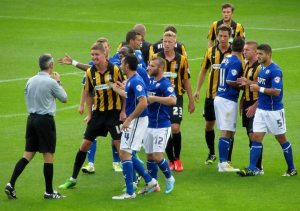 The referee attempts to calm the players down 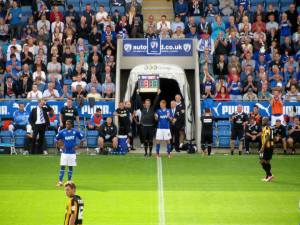 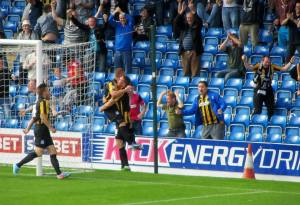 The players and fans celebrate the goal

Richards and Ryan stand over another free kick 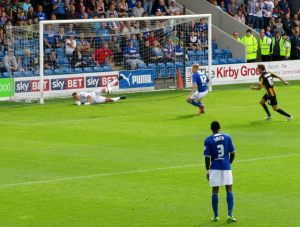 This time it is saved 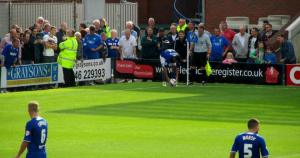 One last chance for the Spireites 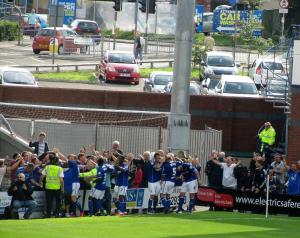 The disappointed Southend fans pack away their flags

Winning goalscorer Gnanduillet gets a hug 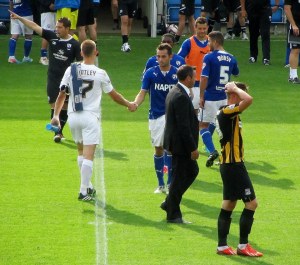 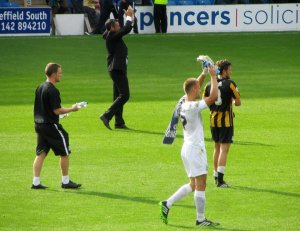 The Southend players applaud their fans