On Saturday 7th December 2013, I went to the Proact Stadium to watch Chesterfield play Southend United in the FA Cup.

It was FA Cup second round day and there was huge anticipation amongst the fans of those clubs involved as they dreamed of potential trips to the likes of Old Trafford , the Emirates or Anfield in the next round. Standing between Chesterfield and a place in the third round draw was Southend United.

Both sides came in to the game sitting in the automatic promotion spots of League 2. The Shrimpers were on an excellent run of form with victories in five of their last six matches, while the Spireites had themselves lost just one of their last eight in all competitions so it was certain to be a close battle this afternoon.

The two managers each made a single change to their starting elevens. For the the Spireites, Tendayi Darikwa replaced the suspended Liam Cooper following a 3-2 defeat to Newport last Sunday. There was just the one change for Southend too after their 1-1 draw with  Cheltenham, with Conor Clifford taking the place of Will Atkinson.

Prior to the game there was a minutes silence in remembrance of Nelson Mandela, who passed away this week at the age of 95. The home side then got off to the perfect start taking the lead inside four minutes. Gary Roberts’ low cross found Darikwa, who fired home at the far post.

But the Spireites’ lead lasted just eight minutes. Marc Laird got on the end of John White’s corner and nodded the ball past Tommy Lee to level the scoreline.

And there was another blow for the Spireites soon after when Roberts was forced off through injury, being replaced by Ritchie Humphreys. Moments later the Shrimpers took the lead. Former Chesterfield man Kevan Hurst crossed and found Anthony Straker who found the net with his header in front of the Kop.

Southend controlled much of the play in the opening 45 minutes as the Spireites struggled to find a way back in to the game. Jay O’Shea saw a free kick from the edge from the box fly well over the crossbar just before the break.

Chesterfield looked much brighter in the early stages of the second half and Drew Talbot almost levelled the score with a header that smashed off the crossbar. Ollie Banks then hit a powerful strike on around 70 minutes which flew just wide of the target.

Paul Cook decide to bring on both forwards Marc Richards and Eoin Doyle in an attempt to salvage something from the game. But with 15 minutes to play, fellow atacker Armand Gnanduillet gifted Southend a great opportunity to put the game to bed as he fouled an opposition player in the box.

Goalkeeper Lee was the hero as he dived down to his left to keep out the spot kick. However, the Spireites couldn’t make the most of this let off and with five minutes to go, the result was finally put beyond doubt. Hurst charged in to the box and fired a strike past Lee to book the Shrimpers’ place in the 3rd Round.

Richards had a chance to pull a goal back in stoppage time, but his effort flew over the crossbar – a strike that summed up Chesterfield’s disappointing afternoon.

Itt was disappointing to fall at this stage with the possibility of a big third round tie in sight. However, Southend more than deserved their victory and were one of the best sides to come to the Proact this season so far in my opinion. There is more cup action for Chesterfield in midweek as they travel to Boundary Park to play Oldham in the JPT Area Quarter Final.

Back at the Proact 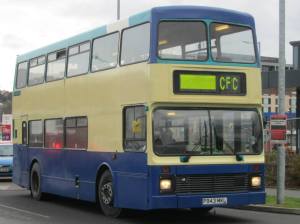 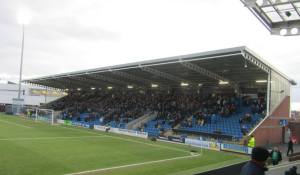 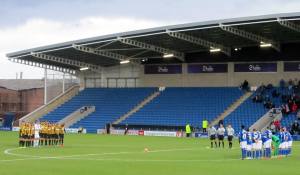 A minute’s applause in honour of the late Nelson Mandela 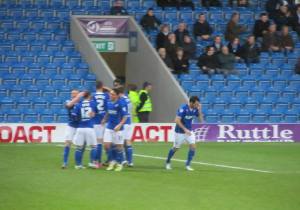 The players celebrate the opening goal 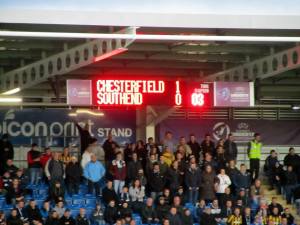 My view of the game 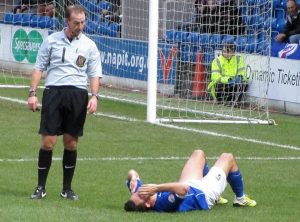 Southend prepare to take a corner

Gary Roberts is forced off through injury 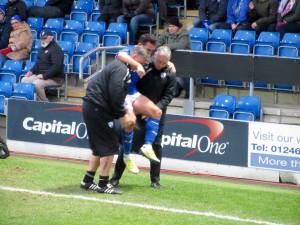 Roberts is carried off the field

Fans in the West Stand 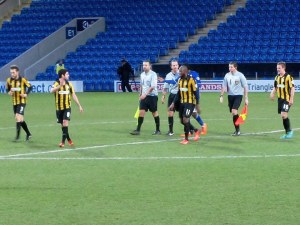 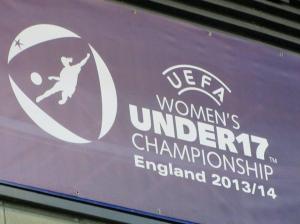 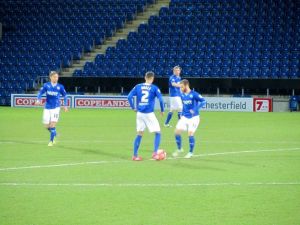 Chesterfield begin the second half

The floodlight shines down 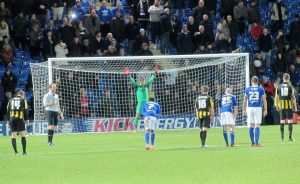 Southend are awarded a penalty