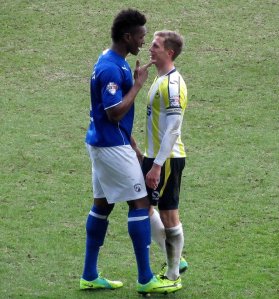 On Saturday 15th February 2014, I went to the Proact Stadium to watch Chesterfield play Torquay United in League 2.

Chesterfield have found some fantastic form in recent times to send them to the summit of League 2. Unbeaten at home in 2014 and on the back of four wins in their last five games, the Spireites hosted strugglers Torquay United at the Proact Stadium this afternoon as they looked to further their lead at the top of the table.

A dramatic last minute victory for second place  Scunthorpe United last night meant they had drawn level on points with the league leaders. However, victory for the Spireites would see them reopen a three point lead, so this was another big huge game against an inconsistent Torquay outfit that had won two and lost two in their last four matches. 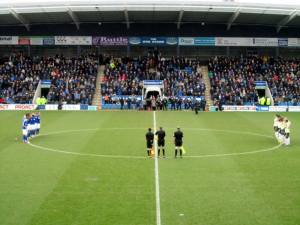 In the three previous meetings between the sides at the new stadium, there had been one win each. The trend of close contests between the Spireites and the Gulls was kept up in a tight, scrappy opening 45 minutes. Chesterfield started brightest and Jay O’Shea came inches away from scoring after just three minutes, but his close range volley smashed off the crossbar with the Torquay ‘keeper beaten.

Following this early opportunity and some good possession from the Spireites, the game died down into something of a stalemate. The Gulls’ containing tactics worked excellently and neither side was able to muster any really good chances for the remainder of an uneventful first half. 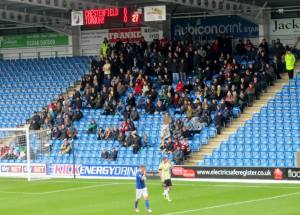 The game finally burst into life at the start of the second period as the visitors took a shock lead. Shamir Goodwin picked up the ball in his own half and charged into the Spireites’ box before unleashing a powerful strike past Tommy Lee. It was a superb effort from the 19 year old Brighton loanee and one the sent the dedicated travelling supporters behind the goal certainly enjoyed. 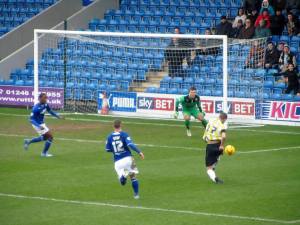 But the potential of a surprise victory for the relegation battlers looked less likely just six minutes later when the scores were levelled. A huge slice of luck for the Spireites saw goalkeeper Michael Poke almost gift the home side an equaliser. His miss-hit kick fell straight to the feet of Eoin Doyle, who comfortably slotted the ball past the keeper.

This surged a new lease of life into Chesterfield, who now had the momentum and desperately searched for a vital second goal. Substitute Armand Gnanduillet caused major problems for the Gulls defence, clearly frustrating them – captain Lee Mansell even attempting the face up to the man who looked twice his size! The Frenchman was also a threat in front of goal and came close twice in quick succession, first from a header and then a close range strike that went just inches wide of the target. 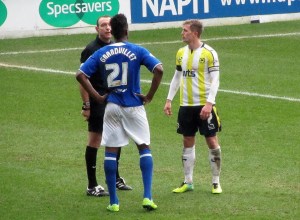 The referee speaks to Gnanduillet and Mansell

With 75 minutes on the clock and the scores still level, Torquay looked to hold on to a valuable point by bringing on defender Aaron Downes. The Australian received a good reception from the home fans as he spent eight years playing for Chesterfield, racking up 174 appearances. 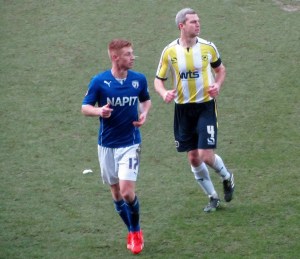 Against the run of play, Goodwin almost regained the visitors lead with a wonderful 25-yard strike that hit the inside of the post. The rebound fell to substitute Conor Wilkinson, but he was unable to hit the target on his Torquay debut.

And the Gulls were made to rue this missed opportunity just moments later when O’Shea put Chesterfield ahead for the first time. Liam Cooper found O’Shea on the edge of the box and the Irishman took a touch before firing a low strike past Poke and into the bottom corner. 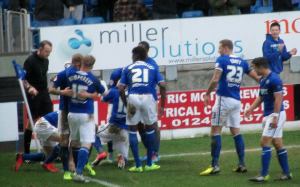 Torquay now threw everything forward in hope of grabbing a late leveller and Wilkinson came close once again. The youngster got on the end of Courtney Cameron’s flick-on but his first time volley went high over the crossbar.

With the visitors putting everything into their attack, their were gaps in the Gulls defence and the Spireites took advantage to seal the points. Gary Roberts was the creator, finding O’Shea with a low cross and the Irishman slotted home to bag his second of the game before charging away to celebrate with the supporters. 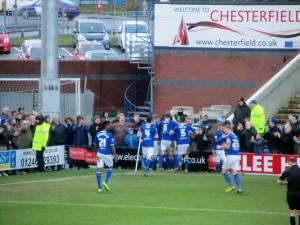 The players celebrate with the supporters following the third goal

It had been a hard-fought victory for the Spireites against a batting Torquay side who are clearly fighting for their football league lives. The 3-1 scoreline possibly flattered the league leaders slightly, but being able to win when not at your best is a true quality of champions. 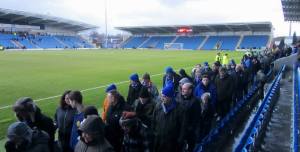 The fans head home after witnessing another victory

The next action at the Proact Stadium is just three days away with the visit of Fleetwood Town in the Johnstone’s Paint Trophy. Chesterfield hold a 3-1 lead after the first leg of the Northern Final so the Cod Army will be looking to come out all guns blazing and turn the tie around. It is bound to be a tense and nervy night as the Spireites look to make their second visit to Wembley in three years!