On 29th July 2014, I went to Pere Lachaise Cemetery in Paris, France to visit the gravesite of Jim Morrison. My visit coincided with the 47th anniversary of The Doors reaching number one for the first ever time with their hit  ‘Light My Fire’.

James “Jim” Douglas Morrison was born on 8th December 1943 in Melbourne, Florida. A singer/songwriter and poet, Morrison was the frontman of ‘The Doors’, one of the biggest bands of the 1960’s. Alongside fellow band members Ray Manzarek, Robby  Krieger and John Densmore, the band rose to fame with their 1967 self-titled debut album which included hits ‘Light My Fire’ and ‘Break On Through’. The group went on to release a total of six studio albums and with their continued fame right up to the modern day, the band have sold more than 100 million records worldwide.

Following his untimely death at the age of just 27 in 1971, Morrison has become a cult figure across the globe. He passed away in the early hours of 3rd July in Paris. The cause of death was believed to be a drug overdose and the singer was found dead in the bath by his on/off partner Pamela Courson. Morrison had moved to the French capital to live with Courson less than three months earlier, following the completion of The Doors’ sixth album ‘LA Woman’.

Morrison is buried in Paris at Pere Lachaise Cemetery, the largest in the city. It is home to over one million interments including Oscar Wilde and Edith Piaf. The decision to lay Morrison to rest here was made after his friend Alain Ronay remembered the singer stating his wish to be buried at the site during a visit to the cemetery just a month before his death, stating that Pere Lachaise left a great impression on him.

He was buried on the morning of 7th July, being placed in the 6th division, 2nd row, grave number 5. The ceremony was small with a procession of just five people – Pamela Courson, his friend Alain Ronay, Doors manager Bill Siddons, Agnes Varda and Robin Wertle. Flowers were thrown on the coffin and Pamela spoke a few verses before the burial was completed.

Originally having no official marker, Morrison’s gravesite has become a huge tourist attraction over the years and unfortunately this has led to it being vandalised on numerous occasions by some visitors. A protective shield placed over the grave by authorities was stolen in 1973 while a bust of the Doors frontman, made by sculptor Mladen Mikulin, was also defaced and later stolen in 1988. Today, a simple flatstone and bronze plaque adorn the gravesite while barriers placed around it have made it much more difficult for vandals to damage the site, which even on an unimportant day such as the one of my own visit still receives many visitors from around the world.

On the 40th anniversary of his death, bandmates Ray Mazarek and Robby Krieger visited the site to pay tribute to Morrison while many hundreds of Doors fans looked on, showing that even after so many years the legacy of the legendary Jim Morrison still lives on around the world. 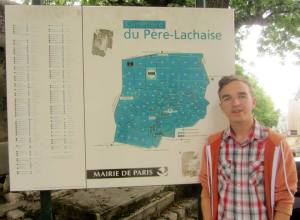 A map of the cemetery

The grave of the legendary singer of the Doors 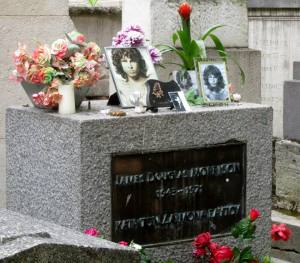 Flowers and pictures left behind

View from another angle

A stone bearing Jim’s face in the cemetery