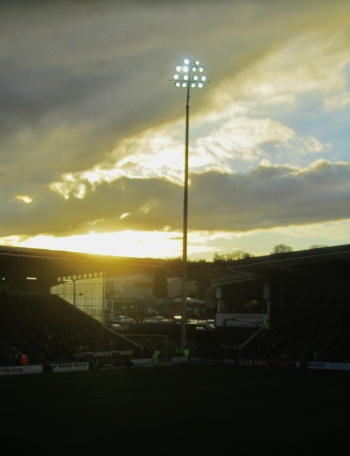 Chesterfield ended a run of seven league games without a win as they defeated local side Barnsley 2-1 on Saturday 22nd November. A brace from Eoin Doyle, the country’s top scorer, put the Spireites 2-0 ahead before a late goal from Keith Treacy pulled one back for the Tykes to set up a nervous conclusion. However, the home side managed to hold on and see out an important victory at the Proact Stadium. Chesterfield and Barnsley’s form this season seemed to be alternating. The Tykes, who were only relegated from the Championship last season, made a poor start to the campaign with just two victories from their opening nine games. Meanwhile, the Spireites had hit the ground running – only losing twice in their first nine. But more recent results told a very different story. In their past eight matches, the Spireites had won only once – and that was in the FA Cup against non-league Braintree Town! In contrast, Barnsley had only lost twice since the start of October and were victorious in their last three games, including an excellent away win against Sheffield United. 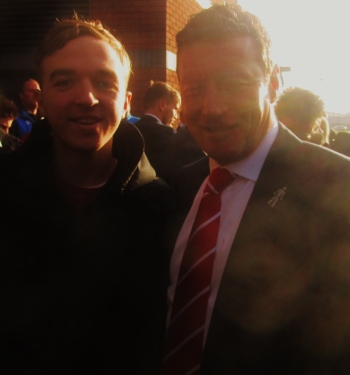 It was the first time the two sides had met in the league since 2006 and the Tykes’ first competitive visit to the new stadium in Chesterfield. A large crowd were in attendance for this afternoon’s contest, including more than 2000 travelling supporters. This created a great atmosphere as the game began under bright November sunshine. 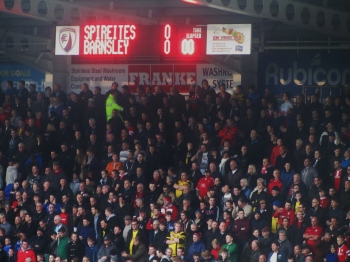 A great away following for the Tykes

There was little between the two teams in the early exchanges as both had chances to break the deadlock. Barnsley forced the first save of the afternoon after just three minutes as Conor Hourihane’s low, powerful strike was palmed away by Tommy Lee. Sam Winnall raced in for the rebound, but the assistant’s flag was raised for offside before he could capitalise. For Chesterfield, a cross from Daniel Jones found Doyle in front of goal, but the forward’s glancing effort was comfortably held by goalkeeper Ross  Turnbull. 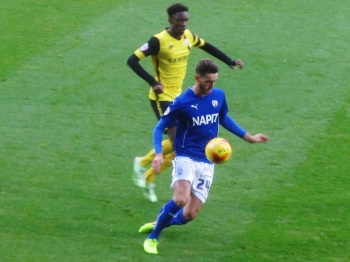 Lewin Nyatanga made the Spireites’ goalkeeper dive into action again to keep out his header, before a similar chance at the opposite end saw Ian Evatt head the ball over the crossbar from close range as half time approached. But with just three minutes to go until the break, the local derby had its first goal. Doyle notched his 15th goal of the season with a superb lob over the helpless Turnbull to give the Spireites a half time advantage. 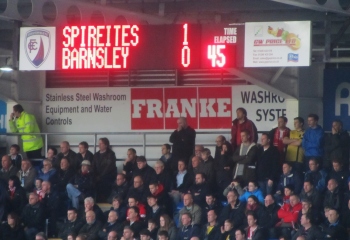 The interval saw a mention over the tannoy for my grandfather Peter Watterson, who sadly passed away on Tuesday aged 77. Peter was a lifelong Spireites supporter and also the brother of former Chesterfield chairman Mike Watterson. The second period got off to a fast start as the visitors almost leveled the scores. Luke Berry’s pass found Kane Hemmings, whose low effort was only blocked by the outstretched leg of goalkeeper Lee. And the Tykes were left ruing missed chances when, in the 58th minute, Chesterfield doubled their advantage. Doyle cut past his man before finding the far corner with a classy finish to put the home side two goals up. 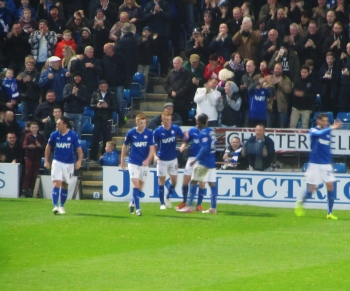 Barnsley were desperately searching for a way back into the game and they almost found it – Devante Cole only being denied by yet another save from Lee. You began to get the feeling that it wasn’t the visitors day when Winnall’s header finally found a way past Lee, only to be denied on the line by Tendayi Darikwa. 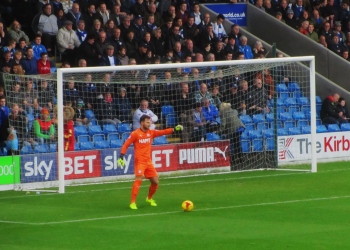 However, as the Tykes piled on the pressure they finally found a breakthrough with five minutes to go. Some poor defending from the Spireites saw them fail to clear the danger and the ball fell to Ireland international Treacy, who fired the ball home. A nervy ending saw the Spireites desperately hanging on to the three points, but their back line held strong through four minutes of stoppage time and there was a huge cheer of relief from the home supporters at the full time whistle. The victory sees Chesterfield back in the top half of the League 1 table, sitting in 11th position. 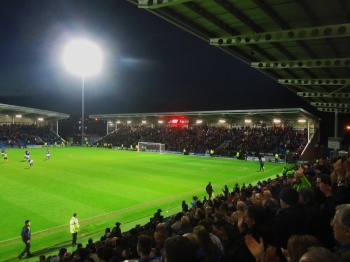 Relief for the home fans at full time