Kasabian performed their final show of 2014 at Sheffield’s Motorpoint Arena on Saturday 13th December to bring to an end an incredible year for the band.

The performance in the steel city saw the indie rockers’ tour reach its conclusion, having played shows at arenas all over the UK during the past couple of months – including a five-night stint at London’s Brixton Academy.

All this capped off an amazing year for Kasabian. June saw the release of their fifth studio album, ’48:13′, which quickly became their fourth consecutive number one. But perhaps most impressively, the summer also saw the four-piece headline Glastonbury Festival, one of the most prestigious achievements for any band.

The countdown to Kasabian’s arrival on-stage in Sheffield

It was a new track, ‘Bumblebee’, that got the performance underway in Sheffield. As the half-hour countdown that filled the backdrop reached zero, the room suddenly plunged into darkness as the crowd roared with cheers of excitement. Two spotlights then shined down on vocalist Tom Meighan and guitarist Sergio Pizzorno, who played an acoustic intro before the stage burst into life for the second half of the opening track as the show got off to a powerful start.

The newer material impressed the crowds and provided some of the most entertaining moments. ‘Eez-eh’, the first single from ’48:13′, was a particular favourite and showed off the lighter side of the band’s material. Meanwhile, the almost seven minute track ‘Treat’ allowed the band to make use of impressive lighting arrangements – at one point a holographic beam piercing through the arena. 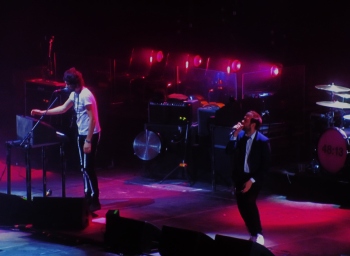 ‘Bow’ – another from the 2014 release, provided one of the slower and more relaxed performances of the evening. Pizzorno, known as ‘Serge’ by the fans, was filled with boundless energy for almost the entirety of the performance but took this opportunity to really show off his musical talents as he played a solo rendition of the song in front of an impressive backdrop. 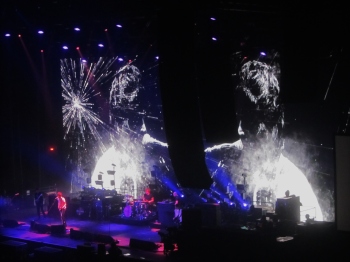 However, there was no doubt that, for the majority of the people inside Sheffield’s largest music venue, it was the older hits that were the real highlights of the night. The third song of the ‘Underdog’ really got the room bouncing, whilst the likes of ‘Days Are Forgotten’, ‘Fast Fuse’, ‘Club Foot’ and ‘Thick As Thieves’ thrilled the audience. 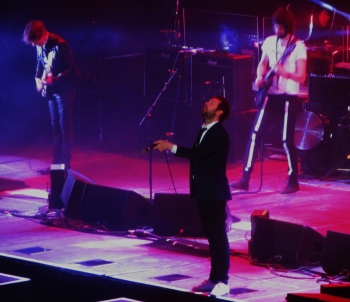 The classics thrilled the crowds

Throughout the concert, ‘Kasabian’ also cleverly incorporated various clips of covers into their own tracks. Pizzorno’s rendition of ‘Word Up’ by ‘Cameo’ was used as the outro for ‘Rewired’ whilst clips of ‘People Are Strange’ by ‘The Doors’ and ‘Misirlou’ by Dick Dale both also appeared during the set.

A very special cover of the the famous Ghostbusters theme tune was also performed, something the band had not done on any other night of the tour – Meighan informing the crowd; “that was a treat for you, Sheffield.”

A treat for Sheffield

The show headed towards it’s conclusion and the frontman got one of the biggest cheers of the night when he told the crowd that “Sheffield is f*cking empire” following the song ‘Empire’. The band then left the stage following a superb performance of ‘Fire’ – one of their most popular tracks and one that really got the crowd going, Pizzorno at one point telling the crowd to “get down”, before everybody leapt to their feet as the chorus struck. 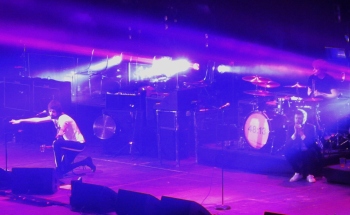 The inevitable requests for more quickly came from the crowd with the show appearing to be over, but of course it wasn’t as the band quickly returned for their encore.

‘Stevie’ and ‘Vlad The Impaler’ brought the concert towards it’s conclusion before the band ensured it was an impressive end to an impressive year with ‘Praise You’ and ‘LSF’. The two songs rolled into one perfectly and the crowd echoed the tune around the venue long after the track had finished – the band staying on stage to soak up another wonderful moment in their careers. 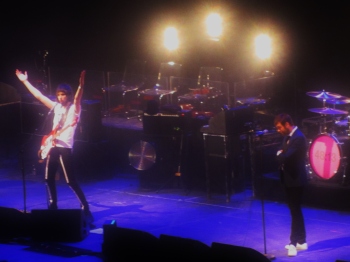 The four men – Tom Meighan, Sergio  Pizzorno, Chris Edwards and Ian Matthews, along with the rest of the performers, all took a bow and thanked the crowd. The band’s frontman then serenaded the audience with ‘We Wish You A Merry Christmas’ before finally leaving the stage, bring an end to an outstanding evening.

The show comes to an end