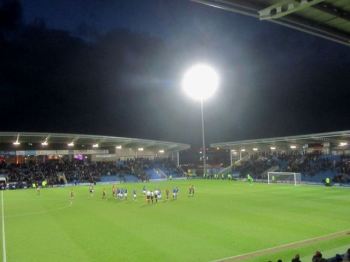 Armand Gnanduillet opened the scoring in the 13th minute with a header. The club’s top scorer Eoin Doyle doubled the advantage on the hour before Charlie Raglan’s first goal for the Spireites completed a comfortable 3-0 victory.

It was an impressive showing for the home side, who remained in 7th position as they moved six games unbeaten.

It was a special day at the Proact Stadium as the club celebrated ‘Ernie Moss Day’ – a day commemorating Chesterfield’s all-time record goalscorer Ernie Moss. The 65-year old played for both of the clubs in action this afternoon during a career that spanned 24 years and a total of 749 appearances. 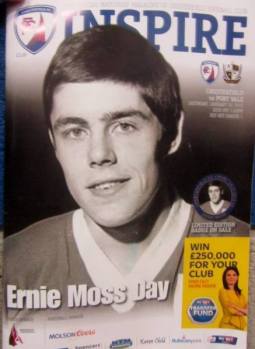 749 Ernie Moss badges were on sale before the game, representing his appearance total. Highlights of a glorious career were also played on the brand-new big screen whilst the man himself was introduced to crowd at half-time alongside a number of other club legends.

Moss is suffering with ‘Pick’s Disease’ – a form of dementia, and the day was held to to raise awareness and funds for various related charities, as well as to recognise a magnificent career. 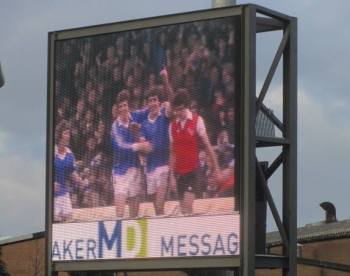 Some highlights from Moss’ career are shown on the big screen

Chesterfield made sure they commemorated the occasion with a memorable performance of their own.

It took less than a quarter of an hour for the Spireites to break the deadlock. Romuald Boco’s cross found Gnanduillet, who fired his free header past Chris Neal before a passionate celebration in front of the away supporters. 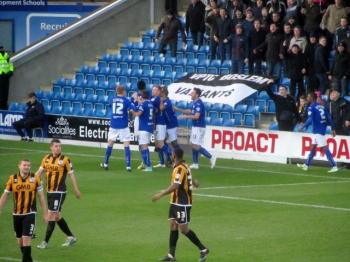 The Spireites were in complete control and they looked to add to their lead in the opening half. Boco fired a hopeful effort wide of the target, before some neat movement from Gnanduillet almost led to his second – goalkeeper Neal doing well block the effort.

The Frenchman was on top form this afternoon – turning creator as he set up Gary Roberts, who unleashed a curling effort that went just wide of the target. 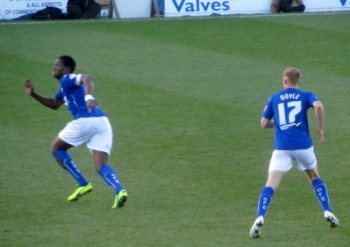 Ben Williamson looked to turn things around for Vale at the start of the second half, but his poor strike summed up his side’s efforts.

And some woeful defending gifted the Spireites their second goal of the contest shortly before the hour. Freddie Veseli let the ball bounce over his head straight to Doyle, who he pulled down – leaving the referee no choice but to point to the spot.

Top scorer Doyle stepped up and sent the goalkeeper the wrong way to fire home his 18th league goal of the season. 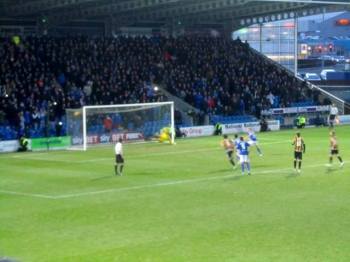 Doyle scores from the spot

Sam Morsy nearly added a third with a long-range effort that forced a fabulous diving save out of the goalkeeper.

But with 20 minutes to go, the Spireites did make it 3-0. Defender Raglan got on the end of a corner and powered the ball home – charging away with visible delight at scoring his first goal for the club.

Vale tried desperately to find a way back into the contest – even hitting the woodwork in the final minutes, but in the end they couldn’t find a breakthrough and it was a deserved victory for the Spireites as they continue to move towards the League 1 play off spots.