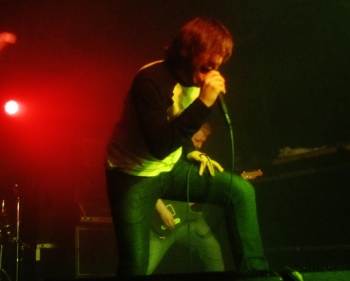 Sheffield’s ‘Inherit The Stars’ celebrated the latest chapter of their exciting career with an explosive performance at Corporation on Saturday 7th February to celebrate the release of their new EP.

The new five-track release, titled ‘Beyond the Beacons’, has earned Dan Jeffery, Theo Egginton, Lewis Wild and Chris Brayshaw – collectively known as ‘Inherit the Stars’, some much deserved attention.

A unanimous success among music reviewers, the release even saw one of it’s track featured on a CD given out by ‘Rock Sound Magazine’ – another exciting moment for this popular alternative Sheffield quartet.

Tonight’s gig at Corporation saw the band celebrate their new EP in style, less than two years after they celebrated the release of the debut album ‘We Were Made To Walk The Skies’ on a memorable night in the very same venue.

In front of an adoring crowd, the four-piece hit the stage at around 9:30 and shook the venue’s most intimate room with their unique, innovative music style that cannot be placed under a single genre – everything from post-hardcore to metal  to pop and even dubstep all possible descriptions!

All five tracks from the ‘Beyond the Beacons’ were played – including ‘Still Alive’ which kicked off the set, and possibly the standout tracks of the new material ‘Flaws’.

The newer songs were accompanied by the “classics”, which had the band’s ever-growing fanbase singing along and creating moshpits at every opportunity – frontman Dan even diving off the stage to join in at one point!

The single ‘Ground Zero’ and ‘Caught in the Crossfire’ from their album both offered memorable moments. Whilst the finale of ‘If We Fall, We’ll Fall Together’ had the crowd singing along over and over in a moment that the lead singer later described on social media as “one of the best moments of my life”.

If We Fall, We’ll Fall Together

They’ve only been around for a couple of years but already ‘Inherit The Stars’ have become one of the most exciting prospects in the Sheffield music scene. With an already impressive catalog of tracks, a fanbase that is growing by the day and a live performance that never fails to deliver, there is no reason why they can’t follow the likes of Sheffield band ‘Bring Me The Horizon’ and ‘While She Sleeps’ to stardom. 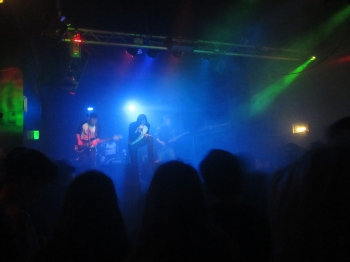 Another unforgettable night for ITS