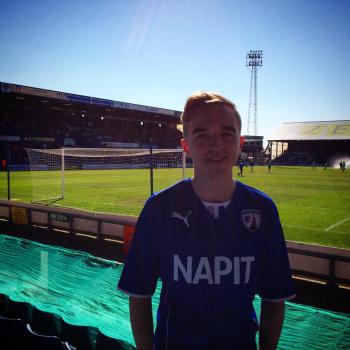 Chesterfield moved to within touching distance securing a play-off spot despite a drab goalless draw against Oldham Athletic at Boundary Park on Saturday 18th April 2015.

The Spireites headed to Boundary Park knowing that today’s result could confirm their top six finish – a potentially remarkable achievement for a club who were only promoted to the third tier last season.

They were looking to continue an incredible run that had seen then earn seven wins and a draw in the last eight games. Victory this afternoon, along with a Rochdale defeat at Gillingham, would see the play offs secured.

This afternoon’s hosts Oldham Athletic had little to play for other than pride as a disappointing season came to a conclusion. The Latics sat in 14th place and were without a victory in five.

It was Chesterfield, in their white away strip, who got my first ever match at Boundary Park underway.

The sun was shining in Lancashire. One side of the ground being closed due to the building of a new stand meant the atmosphere lacked a little at times, and this wasn’t helped by a drab first half of football that offered little to shout about for either set of supporters.

Oldham were the first to force a goalkeeper into action when Connor Brown fired towards to bottom corner, but Tommy Lee always looked comfortable in keeping it out.

Rhys Murphy then had a decent chance for the Latics as he picked up a botched Tendayi Darikwa clearance in front of goal. The striker’s first effort was blocked by Ian Evatt, but on the rebound he connected with a bicycle-kick attempt that made the goalkeeper work.

But the 6ft4 Frenchman struggled to make a real impact – a couple of weak efforts as much as he could muster up in the first 45 minutes.

The second half seemed to continue in a similar vain as neither side was able to create many clear-cut opportunities.

The news of Gillingham taking the lead against Rochdale brought a cheer from the away fans, who knew that a single goal for their side would now do it!

Chesterfield responded to the crowds roars by bombarding the Latics area with corners. Evatt came close to scoring when he connected with Roberts’ driven ball, but Joel Coleman got down well to keep it out.

Then, with less than 10 minutes to go, the Spireites were gifted a golden opportunity.

Roberts’ cross was flicked on by Sam Clucas and smashed off the post. With the keeper in no man’s land, the ball fell to Gnanduillet, whose task looked simple. However, the forward could only rifle his effort over the bar to th dismay of the supporters.

In the final moments Clucas unleashed a powerful effort that was only denied by an impressive fingertip save by Coleman, who ensured it would be a goalless afternoon

While the result meant the play offs were not yet secure, it was still a major step towards this feat. An eight-point gap now appeared between Chesterfield and Rochdale, with the Spireites only having two games to play. If Rochdale fail to beat Leyton Orient in their game in hand on Tuesday night, then a top six spot will be secured!