It was a tight battle between these two local rivals, who both fell short in the League 1 play offs last season, but goals at the start of either half proved to be killer blows as the Blades secured their first three points of the season.

Chesterfield’s first away match of the new campaign saw them make what will be their shortest journey of it, heading to Sheffield United with hopes of picking up their first victory at Bramall Lane since 1989 and spoiling Nigel Adkins’ maiden home game in charge of the Blades.

The two sides last met only three months ago, on the final day of the regular season where it ended 1-1 before the teams went on to be defeated by Swindon Town and Preston North End respectively in the play offs.

Both clubs had seen a change of manager since that day; Nigel Adkins replacing his sacked namesake Nigel Clough while Dean Saunders took charge at Chesterfield following the departure of Portsmouth-bound Paul Cook.

And the two men had made contrasting starts to League 1 life at the helm of their respective clubs.

Saunders’ Spireites opened the season with a tremendous 3-1 home victory over another South Yorkshire club, Barnsley, coming from behind to win with goals from Jay O’Shea, Sylvan Ebanks-Blake and Sam Morsy.

Meanwhile, the Blades were currently propping up the third tier standings after a 4-0 humiliation at Gillingham last Saturday. And while they had scraped past Morecambe 1-0 in the League Cup in midweek, there was no doubt that the Blades were looking to bounce back with a far more positive result this afternoon.

But they were having to do so without Scottish forward Jamie Murphy, one of their top scorers from the last campaign, who had joined Championship club Brighton &  Hove Albion the previous day for an undisclosed fee.

His place in the starting line up was taken by Ireland international Conor Sammon, who accompanied Billy Sharp – in his third spell with the Blades, up front. This was among four changes from the United eleven that started at Priestfield Stadium last weekend – including a change in goal as Mark Howard replaced George Long.

For Chesterfield, new man Lee Novak was named in the starting line-up just 24 hours after joining the club on a season-long loan from Birmingham City. The 26 year old accompanied Ebanks-Blake, another man with  Championship experience, in attack as Saunders switched to a 4-4-2 formation with O’Shea and Dan Gardner on the wings as Gboly Ariyibi, one of the star performers against Barnsley, fell to the bench.

It was set to be a feisty and competitive contest between these rival clubs, but prior to kick off the two sets of supporters were as one – respectfully taking part in a minute’s applause for United legend Alan Woodward who passed away in May, having made 639 appearances for the Blades and scoring 191 goals between 1964 and 1978.

The sun shone over the steel city as kick off time finally arrived and the Blades anthem of “greasy chip butty” echoed around the stadium as the game got underway.

And it wasn’t long until the more than 20,000 home fans were on their feet again as Adams opened the scoring after just three minutes. Sammon broke free in the area and fired an angled strike that was palmed away by Tommy Lee, straight into the path of the 19 year old winger, who fired home to give the Blades an important early advantage.

The Blades had started on the front foot and Sharp had a chance to double the lead inside 10 minutes as he raced forward with Sammon in support, but opted to go alone and sent his effort wide of the target.

Following a slow start, the Spireites eventually began to grow into the contest, forcing a number of corners and half-chances but often lacking quality in the final third.

There was a heart-in-mouth moment for the Blades defence as Ian Evatt got on the end of a long ball forward and clipped it across the face of goal, but no attacker could reach it and the danger was ultimately diverted away for a corner.

Around the 20 minute mark Chesterfield came close again. Ebanks-Blake picked out O’Shea with an excellent pass, before the Irishman whipped the ball towards the far post – finding Gardner, whose goal-bound strike was deflected away for yet another corner.

The remainder of the first half became very stretched as both sides pushed forward in turn, but neither really managed to challenge the goalkeepers.

The attacking pair of Ebanks-Blake and Novak showed promising signs, Novak nearly troubling Howard with a low effort at the near post. But the two often cut frustrated figures as the rest of the team struggled to provide them with the service required.

Meanwhile for the home side, the teenage goalscorer Adams and loanee Sammon looked particularly threatening down the left, but the Blades too struggled to create clear-cut chances as they looked to double their lead.

Returning from the half-time break, the 2,048 fans who made the short trip from North Derbyshire will have been hoping for a repeat of the previous week’s superb turnaround against Barnsley, where their side turned a 1-0 deficit into a 3-1 win.

However, less than 60 seconds into the second period Chesterfield’s task was made dramatically more difficult. It was Adams who once again found the net, working a neat one-two with Sammon before poking past Lee from inside the box.

Novak looked to be in with a great chance of pulling one back for the Spireites as the ball fell to him perfectly in front of goal, but a last ditch tackle from the defender managed to clear the danger before the new man could unleash an effort.

The Blades then raced up the other end and Sharp forced a good stop from Lee, before Jones blocked Sammon’s rebound effort on the line – although the flag was up for offside as this occurred.

And Lee had to be on his toes again shortly after as Stefan Scougall wasted a great chance to increase United’s lead, Sammon cutting the ball back to the Scot who fired a weak effort straight at the ‘keeper.

Chesterfield’s came closest 17 minutes from time. Dan Jones, one of the Spireites best players on the day, curled a free kick towards the far post and, after taking a number of deflections along the way, the ball crashed off the woodwork before it was finally cleared.

Lee then denied the dangerous Adams a hat trick by tipping an effort wide, before Jones forced a final instinctive block from United stopper Howard with another curling free kick – but as the full time whistle blew it just wasn’t Chesterfield’s day.

Adkins’ reign at Bramall Lane had got off to the perfect start with a 2-0 victory and a decent performance to lift the club off the bottom of the League 1 table, getting the Blades back on track in their dreams of promotion to the Championship.

It was a disappointing afternoon for the  Spireites, who had controlled large portions but lacked any real cutting edge in attack – an issue that will leave many fans wondering why in particular the exciting winger Ariyibi was not involved earlier than the 82nd minute, having played so well against Barnsley and caused the Blades problems during his short cameo this afternoon.

Reflecting on the defeat, an obviously disappointed Saunders said “We didn’t get the result we deserved today. We must have had 15 chances but we’ve got to turn these performances into wins.”

“The first goal was dreadful and the second was even worse, you can’t give goals away like we did today right at the start of both halves, but we will learn from that.”

However, the former Sheffield United man remained positive claiming “Not many teams will come here and boss the game like we did today.” before moving forward to Tuesday’s visit to Shrewsbury Town: “It’s a chance to put things right. If we win there it’s six points from three games, I’d have taken that at the start.”

Finally, following the addition of Lee Novak, who Saunders described as “too good for this league”, the Chesterfield manager promised there will be another new signing ahead of Tuesday’s game. 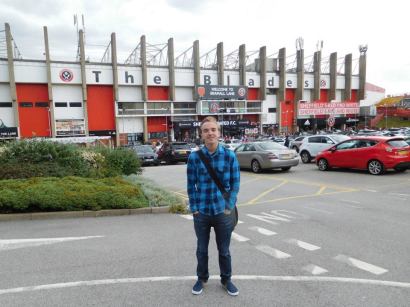 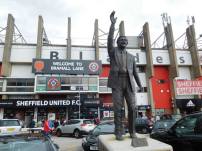 Derek Dooley statue outside the ground

In the press box at Bramall Lane for the first time

View from the away end 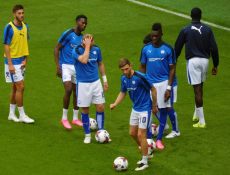 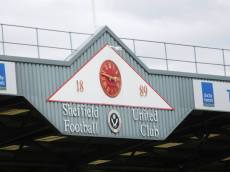 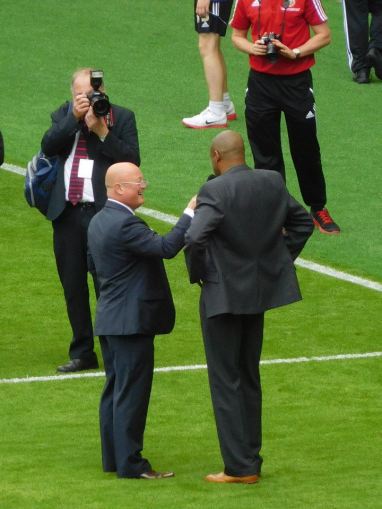 In the press box!

Panoramic of my view

A sunny day at Bramall Llane

A minute’s applause for Alan Woodward 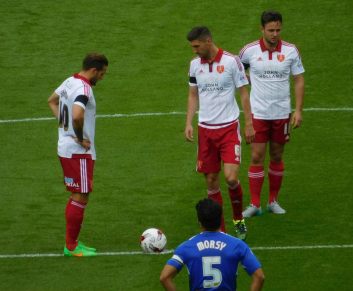 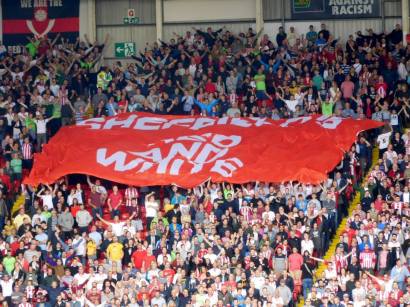 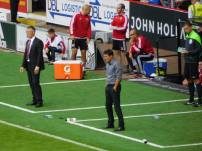 Saunders shouts orders as McEveley throws the ball to Adams 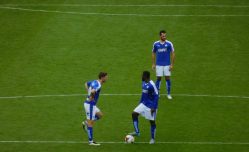 Second half gets under way

Another free kick misses the target 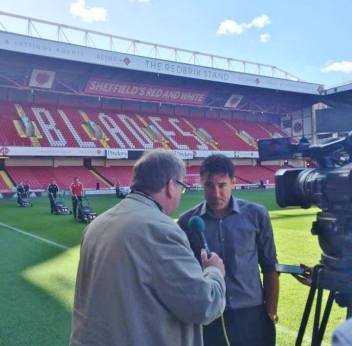 A great experience with the media
Advertisement