Chesterfield and Rochdale cancelled each other out in a fairly entertaining but ultimately goalless draw at the Proact Stadium.

Strong-starters Chesterfield and Rochdale went head to head on the third weekend of the new season.

Both sides had picked up six points from their opening three games, the Spireites beating Barnsley and Shrewsbury but losing to Sheffield United whilst ‘Dale beat Peterborough and Blackpool before a midweek defeat to Walsall.

It was clear that, despite the visitors fail to win at the Proact in five previous attempts, this would be an incredibly difficult game to call with little between the two clubs.

For Rochdale, Keith Hill made a single change from their first defeat of the season – Joseph Bunney replacing Rhys Bennett. The experienced Ian Henderson led the visitors attack. whilst former Spireite loanee Donal McDermott started for the visitors against his former club.

And it was McDermott who had the first half-chance of the afternoon, charging forward before unleashing a strike that was deflected off Sam Hird and wide of the target.

A similar run at the other end by Sam Morsy saw him go past a number of players, but just as he was about to fire at goal, the ball was taken off his toe by defender Joe Rafferty. Ian Evatt connected with the resulting corner at the far post but it was comfortably held by Josh Lillis.

Angel and Novak showed some positive early signs, linking up well before Novak was fouled as he looked to attack – Dan Gardner unable to keep the following free kick on target, firing it into the stand.

An outstanding stop by Tommy Lee then miraculously kept the game scoreless as Bunney had a great chance to find the net from close range in the 23rd minute, after a neat set up from McDermott.

The same man then had another chance for the visitors as the ball landed at his feet from the corner. However, Bunney’s close range volley was charged down and deflected wide by Jay O’Shea.

Rafferty was once again a hero for Rochdale shortly after the half hour. Talbot’s cross landed at the feet of Sylvan Ebanks-Blake in the six-yard box, but the defender was once again on hand to avert the danger before the Chesterfield attacker could get his shot away.

Bunney, who had been a threat for the visitors thus far, was forced off in the 39th minute through injury – replaced by Calvin Andrew, an unpopular man in Chesterfield having scored the winner against them for local rivals Mansfield Town a few years prior.

The final few moments of this goalless first half proved to be the most action-filled.

An unbelievable fingertip save from from Lillis somehow denied Ebanks-Blake’s close range header. The visitors then charged down the other end and almost opened the scoring themselves, McDermott forcing another good save from the onrushing Lee before the half time whistle blew.

A second half greeted by sudden torrential rain got off to a fast start with three decent opportunities in the opening ten minutes.

Henderson directed a Rafferty’s low cross over the bar, before just missing out on a similar opportunity when his outstretched leg just failed to connect with a similar setup from Peter Vincenti’s. Meanwhile, Ebanks-Blake played Novak through with a neat touch but the forward’s effort was weak and comfortably held by the goalkeeper.

McDermott was a constant menace for the visitors and showed lightning speed to steal the ball of a complacent Hird, before forcing another save out of Lee between the posts.

The game remained goalless somehow but as the hour mark came and went, it still seemed unlikely to those in attendance that neither side would find the net this afternoon.

Both teams briefly went down to ten men through injury – a bloodied James McNulty going down after a clash of heads with Ebanks-Blake, and Novak fell to the ground injured just moments later before being replacing by Ollie Banks.

Dan Jones then came close to an opener when his curling free kick took a couple of deflections before flying wide of the target.

With just moments to go and still nothing between the teams,  Saunders made a final roll of the dice by throwing on big frontman Armand Gnanduillet. But his impact was minimal and despite the roars of the home crowd when a corner was awarded in additional time, the big forward failed to connect and the danger was cleared.

Fellow substitute Gboly Ariyibi created one final chance with some clever skill to work his way into the box, but could only find the side netting which meant the game ended without a goal.

The two managers both felt they could’ve won the game – Keith Hill being the more confident in this opinion, stating “We should’ve won the game.” but admitting he was pleased to follow Tuesday’s defeat with a good performance joking “We don’t bounce back we just keep bouncing!”

Saunders said “It was a great game to watch, a good 0-0. We could’ve won but so could they so it was a fair result.”

Speaking about Tommy Lee, who also agreed that a draw was “probably a fair result”, Saunders said “(he) made 3 or 4 great saves, well done to the goalkeepers it was a great day for them.”

In the press box 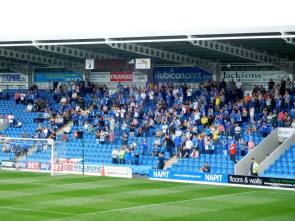 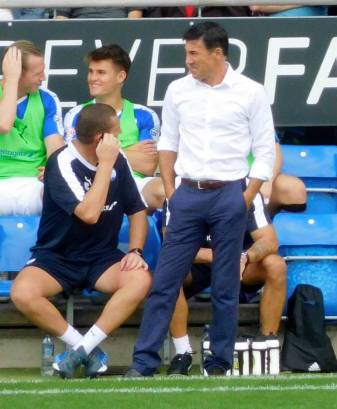 Dean Saunders on the touchline 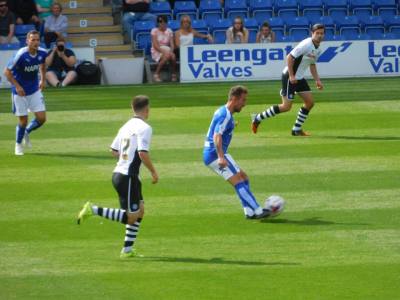 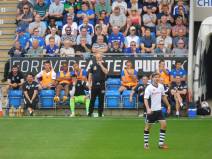 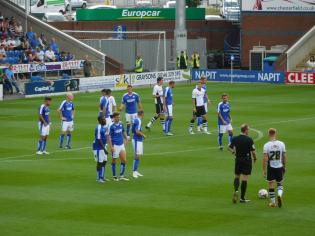 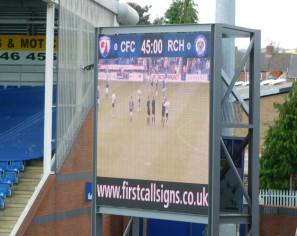 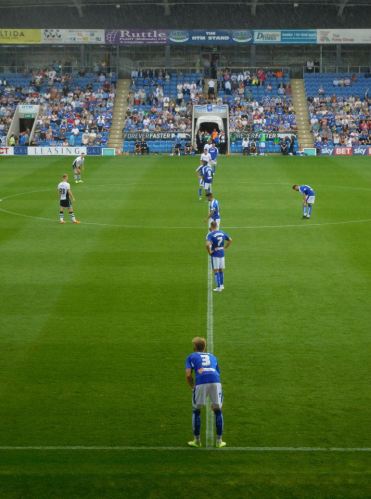 Second half kick off 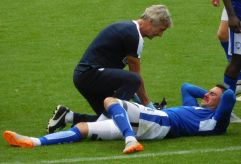 Lee Novak takes a hit to the face 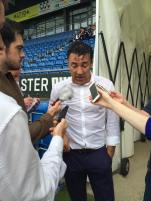 Dean Saunders speaks to the press 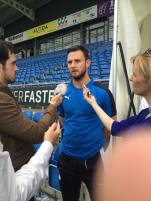