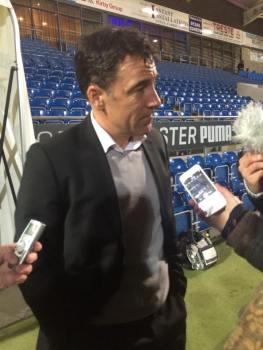 The Spireites were on top from start to finish and it took just eight minutes for a confident Lee Novak finish to put them ahead. Ebanks-Blake then showed his strikers instinct to pounce on the ball and make it 2-0 before the break.

Joe Pigott had a couple of opportunities early in the second period to give the Shrimpers hope, but failed to convert, and it was all over when the ex-Premier League forward smashed home his fifth of the campaign from close range shortly after the hour.

A third win in four outings for Dean Saunders’ men moves them up to ninth, remarkably now a point better off than they were at the same stage last season when they reached the play-offs!

The Chesterfield fans were treated to their side’s best performance of the season by some distance on Tuesday evening, but their is little doubt that many would have gratefully taken a point at the start of the day.

Phil Brown’s Southend United headed to the Proact Stadium in fine form, having won six of their last seven games – a run that had lifted them from 20th to 7th in the League 1 standings. And whilst Saunders’ side were heading in the right direction, winning two after their last three after a winless September, they remained without a home victory since August’s season opener.

The Spireites were expecting a very tough evening’s work against the side currently top of the form table, but from the first whistle there only ever looked like one winner.

Dan Gardner had the fans on their feet in the seventh minute, firing a rising shot just inches wide of the far post after being picked out by Drew Talbot. And just a minute later, it was 1-0. Lee Novak raced through on goal and showed tremendous composure to slot the ball past goalkeeper Daniel Bentley.

The game wasn’t even 15 minutes old and Chesterfield could have been even further ahead. Another Novak chance won them the first of four successive corners – Ebanks-Blake and Talbot getting on the end of two of them but failing to find the target with these half-chances.

The first 20 minutes were entirely one-way traffic, Sam Morsy and Jay O’Shea both sending strikes close but just wide of the target. The visitors did begin to grow into the contest slightly however, winning their first corner in the 21st minute after a good spell of possession. And Tommy Lee had to play the role of sweeper ‘keeper twice in a matter of moments to stop Myles Weston and Pigott from breaking through on goal.

But the Shrimpers lacked penetration, and if anyone was going to score the half’s second goal then it was going to be the home side.

Just after the half hour mark, a short corner landed to Morsy, whose low curling strike forced an excellent diving save from Bentley. Defensive leader Ian Evatt then smashed the near post with a header, but was adjudged offside well before Talbot had put the rebound in the net.

Moments later, however, Chesterfield had their deserved second goal. Gardner’s strike was blocked on the line but in true goal-poacher fashion, Ebanks-Blake moved like lightning to meet the rebound and fire it into the roof of the net – his second goal in as many games.

It had been arguably the best 45 minutes the Spireites had played under Saunders. But a late rally in the first half from Southend almost saw them pull one back, an acrobatic diving header from Dan Jones denying them as the ball looked to be sailing towards the net.

Pigott had a duo of excellent chances to pull one back for the away side inside the opening ten minutes of the second period, but failed to put away either. Lee was off his line like a flash to clear the danger when the 21-year old found himself in a similar position to the scoring Novak had in the first half, before he poked another similar opportunity wide of the target minutes later.

Shrimpers boss Brown went on to describe the result as “uncharacteristic” from his side and picked out these misses at the start of the second half as the key moment, saying “if he puts away those chances it’s a different game at 2-1, but they make it 3-0 and it’s game over.”

Ebanks-Blake’s second of the evening and fifth overall gave Chesterfield breathing space in the 62nd minute. Gardner’s corner was headed goalwards by Evatt at the far post and Ebanks-Blake was once again in the right place to smash the ball home from close range.

With the victory all but certain, the home side began to bring on some of the younger players to see out the victory – Rai Simons and Mani Dieseruvwe replacing Gardner and Ebanks-Blake, who deservedly received a standing ovation from the delighted home supporters.

Southend pushed until the end, ex-Spireite Kevan Hurst making a late cameo to fire a free kick just over the bar, but they never looked like finding a way back into the contest and it was a thoroughly well done job by the Spireites – the only blemish on a perfect evening being the booking of Evatt, who now misses Saturday’s Scunthorpe United game through suspension.

“But I’m really pleased with the players, the effort they put in tonight was the difference. We’ve played well all season and sometimes not got what we deserved. I’m really pleased for the supporters, they were given a good show – I enjoyed watching and I’m sure the fans did too.” 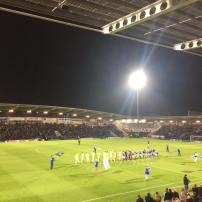 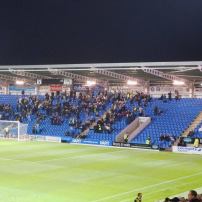 A very good following from Southend 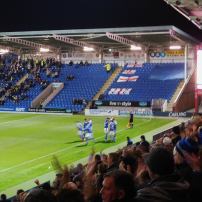 The fans head home after witnessing a great performance 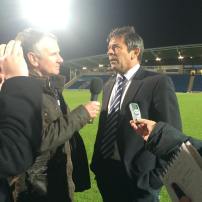