Jackson Caged, one of the mainstays of the Sheffield music scene since their formation a decade ago, are back after a short hiatus with a new line-up and big dreams. I sat down with the metal quartet before their album release show at Corporation to find out more about the band.

Friday night at Corp saw one of the biggest night’s of Jackson Caged’s career so far. Not only was it their first headline show in some time, but it was also the release night of their first “proper” album ‘Entity’.

Laid-back frontman Frazer James Brears, who has been with the band since the beginning, simply stated: “I’m looking forward to it, it’s been a long time” while new lead guitarist Axl Hill admitted to more mixed feelings before his first ever show with the group:

“It’s an important night to finally put the album out there. I’ve not played guitar at this level before. I’ve never done it headlining Corp or anywhere like that, so it’s a bit nerve-wracking. It didn’t help that it took me far too long to set up at soundcheck! The first chords of Entity will probably start and I’ll realise I haven’t got something plugged in! But I think the nerves will stop once I get out there.”

Axl is one of two newcomers to Jackson Caged, along with bassist Frazer Spooner (or Frazer ‘2’, as the band refer to him!). It is a unique set-up as the new members were only youngsters when the band first formed in 2006 – Axl joking that the two were “born into the band!”

Despite not having worked on the album ‘Entity’, which has been around three years in the making, Axl still speaks of the new release with great excitement:

“When I first joined I got the whole thing learnt in a couple of days. It’s a roller-coaster with bits of everything. We’ve got some songs that I’d describe as gritty hip-hop rock rather than metal, then we’ve got some metal and some slower songs. So whatever you like, there’s a bit in there for you” the guitarist explained, before the vocalist jumped in to jokingly cite influences from “Justin Bieber and The Carpenters.”

Despite claiming to have only had six practice sessions as the current line-up, it was an accomplished return to the stage for Jackson Caged who rocked Corp with a setlist of songs from the album before concluding with their best known track ‘Jaws’ and a brilliant cover of ‘Killing In The Name’.

Tonight’s performance is just the start of an exciting period for the band, who recently signed for American label ‘Stepping Out Records’. Frontman Frazer explained how it came about:

“It was me that found them. I just submitted a couple of tracks from the Entity album and they were really interested and said they’d love to release it.”

Axl believes this could be the start of big things for the band:

“We’ve been on labels before, but the way I saw it was that we’ve got enough knowledge to promote in our own city or even county. So having an international label based in LA means we get the international side of things and they can help to get the album out to a wider audience.

“And hopefully one day we can get playing out there and it can be the start of something. Personally my own goal is to play in some other countries as I’ve never gigged outside England.”

For now though, the band are focusing on things closer to home. They will soon start work on music videos for the tracks ‘Entity’ and ‘Monster’ as well as already starting on album number two with four tracks already recorded at Steelworks Studios.

As for gigging, you can next catch them in Sheffield at The Hop on 28th February. And I would definitely recommend that you do! 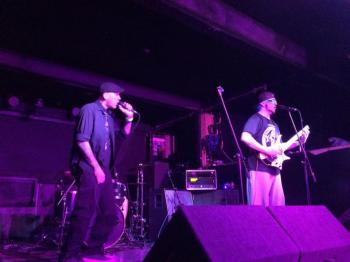