Chesterfield’s unbeaten run was brought to end by Walsall on a miserable afternoon for the Spireites at the Proact Stadium.

Sam Mantom’s second-half brace, along with a goal from Jordy Hiwula, earned the Saddlers a 4-1 victory in interim manager Jon Whitney’s first game at the helm.

The first half had been an even affair with chances at both ends and a goal for each side, both coming from own goals – James O’Connor and Tom Anderson being the unfortunate defenders who found their own net.

But a moment of madness from Dion Donohue saw the defender sent off in a scuffle following the visitors’ second goal and this ultimately proved to be the turning point as the Saddlers ran riot from then on to re-establish their promotion push with a dominant victory.

A quick glance at the League 1 table would have suggested this afternoon’s contest was something of a foregone conclusion as promotion-chasing Walsall paid a visit to Chesterfield, who sat fourteen places below them in 18th prior to the game.

But the form book told a very different story. Lee Novak’s late winner at Southend United last Saturday had moved the Spireites five games unbeaten while their opponents were without a win in their last six outings and had scored just three goals in that time.

Add the fact that the Saddlers had never won at the Proact Stadium in three previous attempts, most recently a 1-1 draw in the FA Cup in December, and it quickly became a much tougher outcome to predict.

Danny Wilson made two changes from the impressive victory at Roots Hall as Drew Talbot and Jay O’Shea returned to the starting eleven in place of loanee Declan John and Liam O’Neil, who missed out due to illness.

The change of manager often sees a change in fortunes, as Chesterfield fans know only too well, and it appeared to have made an instant impact for Walsall as they put themselves firmly in the ascendancy with a trio of efforts coming close inside the opening ten minutes.

But the early dominance didn’t last long and in the 14th minute the hosts finally showed signs of life with a clever move that ended with O’Shea curling a strike just over the crossbar from the edge of the area.

Three minutes later and Chesterfield had an even better chance. O’Shea was this time the creator as he picked out Novak alone just yards from goal, but the on-loan forward just couldn’t get the ball out of his feet and goalkeeper Neil Etheridge managed to charge down the close range effort.

A huge slice of fortune put the home side ahead with 18 minutes on the clock. Once again it was O’Shea that caused the problems as his seemingly harmless cross deflected off defender O’Connor, directing the ball past the helpless Etheridge and into the net.

The goal was followed by a quiet spell in the game with few notable opportunities. Walsall pushed for a way back but struggled to truly threaten Tommy Lee’s net while Talbot’s hopeful and high strike into the stand was the best the Spireites could muster up until the half hour.

With ten minutes to go until the interval, the Saddlers were level in bizarre fashion with a second own goal of the afternoon. Anderson attempted to clear a low cross into the area but completely misjudged it and somehow sliced the ball into his own net to level the score.

Ollie Banks came close to regaining the lead shortly before half time with a thunderbolt from the edge of the box that flew just inches wide of the top corner, but it wasn’t to be and the two sides headed down the tunnel with nothing to separate them.

The second period began in a scrappy fashion before bursting into life three minutes before the hour mark. A cleverly worked moved from the visitors led to Mantom putting the Saddlers ahead with a low strike that beat the goalkeeper down to his right.

And the aftermath of the goal made things even worse for the Spireites. The Walsall celebrations quickly descended into chaos as numerous players from both sides became involved in a scuffle that ultimately resulted in bookings for goalscorer Mantom, Sam Hird and Banks and a straight red for Chesterfield’s Donohue.

Henry wasted a golden opportunity to further Walsall’s advantage seven minutes later with a close range header that was instinctively denied by Lee as the Spireites began to live dangerously.

The atmosphere was quickly turning hostile with the frustrated home crowd screaming for opposition bookings at every opportunity. But it was home attacker Novak who saw his name added to the referee’s notebook after showing visible frustration at another decision by the man in black.

Frustrations were further increased in the 71st minute as the deficit was increased to two. Anderson’s nightmare afternoon continued with a defensive error that was immediately capitalised on by Hiwula, who raced through on goal and comfortably slotted the ball past the ‘keeper to make it 3-1.

Former Wolverhampton Wanderers forward Sylvan Ebanks-Blake was quickly introduced in place of O’Shea as the manager looked for a way back for his side, but moments later the visitors moved 4-1 ahead. Mantom was again the scorer as he broke through on goal and calmly placed the ball into the bottom corner.

Late substitute Ritchie Humphreys was handed an unlikely chance to pull one back in the final ten minutes, but a defenders-style finish saw the ball fly well off target and in truth, a Chesterfield comeback was never on the cards as Walsall ran out comfortable victors to bring the hosts unbeaten run to a disappointing end.

Post-match, an obviously disappointed Danny Wilson said: “It’s very difficult to play against a team of that quality with ten men. While we had eleven I thought we were a match for them, we created lots of chances in the first half and it could’ve gone either way.

“I was looking forward to the second half and I really felt we could beat them. But it was difficult after falling down to ten men. We’ve come off the back of a pretty good return in the past few weeks and I don’t think a whole lot was wrong out there today until we went down to ten men.”

Regarding Donohue’s dismissal, the Spireites boss said: “I’ve not seen it yet. From what I’ve been told, the referee saw a punch thrown which Dion categorically denies. But I need to see it properly.”

Chesterfield remain six points clear of the relegation zone and will now be looking to bounce back straight away at Scunthorpe United’s Glanford Park next Saturday as the battle for League 1 survival goes on. 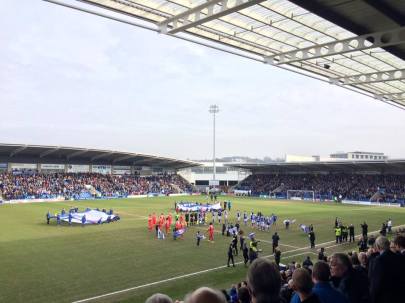 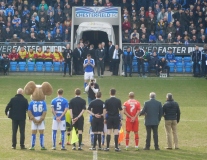 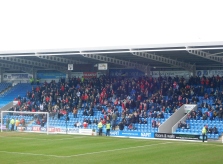 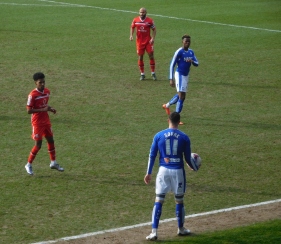 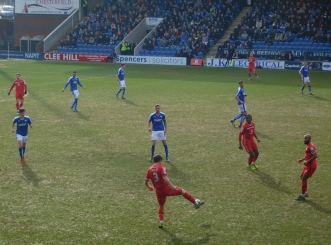 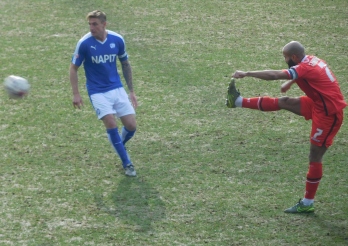 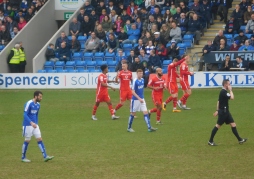 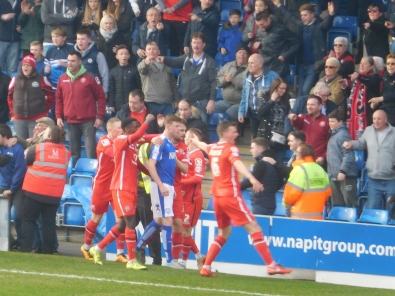 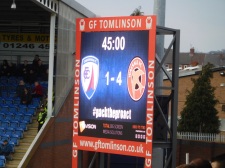 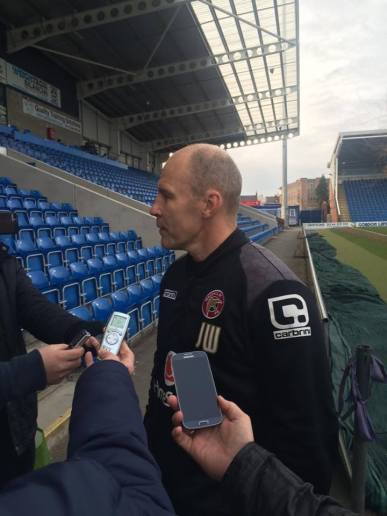