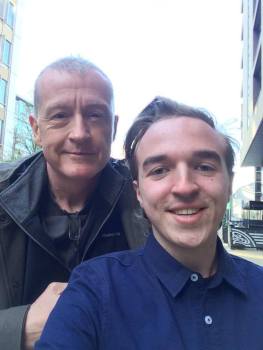 The opening Sunday at the Crucible was the scene for my first visit of the 2016 World  Snooker Championship – my 12th year in a row and 13th in total!

Attending the afternoon and evening sessions, I saw the Scottish duo of Stephen Maguire and Alan McManus complete their first round battle before watching two young stars in Michael White and Sam Baird get their match started with the opening nine-frame session.

It also turned out to be a momentous day in the history of Snooker as a whole as the legendary 6-time World Champion Steve Davis retired from the game competitively, having failed to qualify for this year’s championship.

Living in Sheffield, it is difficult to get away from the snooker circus that rolls into town every year for 17 days.

My Dad has attended every championship since his great uncle Mike brought the event to the Crucible Theatre in 1977 and each year since 2005, I too have been watching at the home of snooker, making this year my 12th in a row (my first visit in 2001 to watch Paul Hunter v David Roe bringing the total to 13).

Having missed what turned out to be an eventful opening day, with reigning champion Stuart Bingham losing out 10-9 to Ali Carter, due to football commitments, our first visit of the tournament came on the opening Sunday.

Before we had even arrived, the drama had already continued as last year’s quarter-finalist and qualifier Anthony McGill defeated 2005 World Champion Shaun Murphy 10-8 – meaning both of last year’s finalists had been eliminated on the opening day!

There was a real possibility that a third seed could be defeated at the first hurdle in our first match of the day as veteran qualifier Alan McManus headed into the 2:30pm session with a strong 6-3 lead over 16th seed Stephen Maguire.

But before the action got underway, the Crucible crowd were treated to a moment of history as it was announced by MC Rob Walker that Steve Davis had announced his retirement – the great champion entering the arena to parade the famous trophy one last time to an adoring standing ovation.

McManus quickly furthered his advantage to 7-3 by taking the opening frame of the session, but Maguire wasn’t done yet and battled back to win the next three, ending with a 97 break, to head in at the interval just one adrift at 7-6.

From here, many may have expected the seed in the ascendancy to turn things around. But the experience of the man making his 20th Crucible appearance showed when the players returned and breaks of 65 and 77 put McManus one away.

Maguire took the next to reduce his arrears to 9-7, before the curtain was raised due to conclusion of the session between Ronnie O’Sullivan and David Gilbert which the 5-times World  Champion had ended leading 6-3.

However, the players didn’t get the famous arena to themselves for very long as the 17th frame of the contest turned out to be the last – a break 63 from McManus securing him a second round meeting with Carter.

The hour or so in between sessions gave us time to catch up with some of the ‘Crucible regulars’, including Kellie and the famous front row Brian, as well as bumping into Steve Davis and, of course, getting a selfie on this momentous day.

For the 7 o’clock session we were watching the youngest member of the top 16, Michael White, take on Sam Baird while over on the other table it was a battle of two former World Champions in Mark Williams and Graeme Dott.

After a somewhat scrappy affair this afternoon, the evening session was very different with the two youngsters playing fast-paced, entertaining snooker for the Crucible audience to enjoy.

The first four frames flew by in no time as the two players shared them to head into the interval at 2-2, White scoring a break 86 to level in the fourth. The Indian Open champion then took the lead for the first time at 3-2, before Baird hit back with 78 to level once more.

It was a back and forth battle and Baird was ahead once more in the seventh before a 60 from White ensured that there would be no more than one frame between the two men at the conclusion of the session. But it was the qualifier Baird who ended the nine frames with an advantage, knocking in a magnificent 108 to lead 5-4.

The contest on the other table wasn’t so close, with Williams ending it 7-2 ahead after losing the first frame – although from our position in the venue it was difficult to see much of the action.

And so came to an end a thoroughly enjoyable day at the snooker. It is hard to believe that the World Championship has come around again so quickly, but it is great to be back and I can’t wait to be back watching again on Tuesday afternoon! 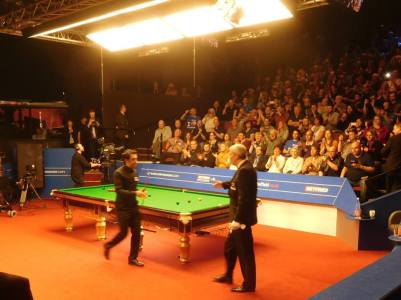 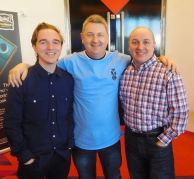 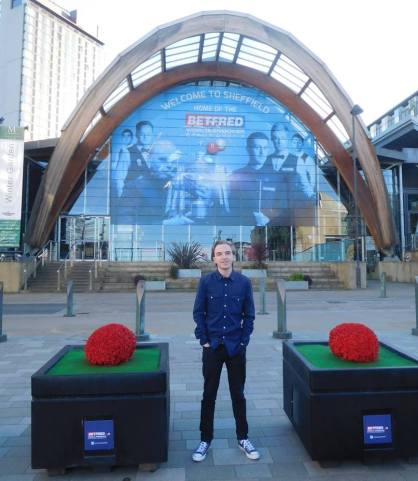 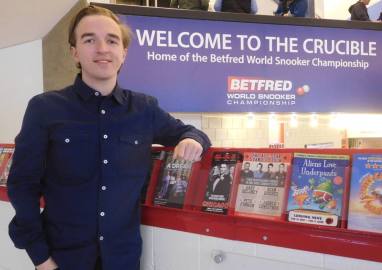