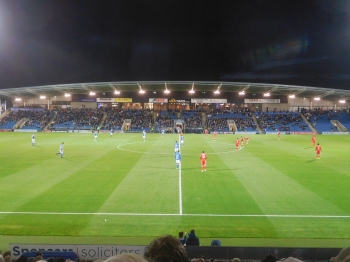 Chesterfield threw away a two-goal lead to draw 3-3 with Gillingham as a 95th minute Scott Wagstaff goal stole a point for the visitors.

Connor Wilkinson opened the scoring after little more than 60 seconds and Kristian Dennis doubled the hosts’ advantage from the spot not long after the start of the second half.

A Jay  Emmanuel-Thomas penalty pulled one back for the Gills, but Wilkinson’s second of the evening restored the two-goal advantage in the 72nd  minute.

However, a second Emmanuel-Thomas spot kick set up a nervy conclusion and in the final minute of additional time, Wagstaff found the net to snatch an unlikely point for Gillingham.

Heading into this week, Chesterfield will have been rubbing their hands at the prospect of two consecutive home games. Of the four league contests at the Proact Stadium so far this season, the Spireites had won three – most recently ending Northampton Town’s incredible unbeaten run with a 3-1 victory.

In contrast to the previous campaign, it is their form on the road that has left Danny Wilson’s side languishing in 15th position, just three points above the relegation zone at this early stage, having picked up only two points from five away journeys thus far.

Yet another injury, this time to defender Paul McGinn, had left Spireites boss Wilson admitting his side were “thin on the ground” and as a result, 19-year-old Laurence Maguire was handed his football league debut at centre back this evening as 8th-placed Gillingham visited North Derbyshire.

However, any concerns the home supporters may have had ahead of this midweek fixture quickly disappeared as their team took the lead barely sixty seconds after the game had begun.

Wilkinson was the man who got on the end of a whipped Jon Nolan free kick to score his third goal in just 75 minutes of football in a blue shirt at the Proact Stadium.

A dream start from Chesterfield was quickly built upon as the hosts looked the dominant force in the early exchanges – Wilkinson almost doubling his tally by glancing a header wide of the target just seconds after Mark Byrne had fizzed a strike over the crossbar at the other end.

They came close to doubling their advantage in the 24th minute when Sam Hird met a cross at the far post and nodded the ball back across the face of goal, but nobody in a home shirt could get to the loose ball and it was lofted to safety by a Gillingham man.

Dennis, looking for a third goal in as many games, then forced goalkeeper Stuart Nelson to parry away a curling strike from range as the Spireites remained on top with the half hour mark fast approaching.

The Gills did see more of the ball in the final fifteen minutes of the half, but rarely looked a true threat in front of goal and it was the home side who remained ahead as the referee’s half time whistle echoed around the Proact Stadium.

And seven minutes after the restart, the lead was deservedly doubled. Nolan was tripped in the area by Byrne, leaving the referee with no choice but to point to the spot, and Dennis accurately converted to the keeper’s right to make it 2-0.

But just as Chesterfield appeared to be cruising to victory, Gillingham were handed a huge lifeline when Tom Anderson pulled down Emmanuel-Thomas in the area – the referee awarding a second penalty in the space of five minutes.

The twenty five-year-old ex-Arsenal man was quickly back to his feet and stepped up confidently, hammering the ball down the centre, to halve the deficit and give the visitors rejuvenated hope of a once unlikely turnaround.

Wilkinson’s fourth goal in three games meant these hopes lasted less than ten minutes, however. The Bolton loanee showed class and confidence to race through on goal and find the net with a wonderful lofted finish, continuing his dream start to life as a Spireite.

But just moments later, Gillingham were back in the game once again! A third penalty of the evening was awarded went debutant Maguire brought down Wagstaff – Emmanuel-Thomas once again converting from the penalty spot to reduce the deficit once more at 3-2.

There was to be no hat-trick for Wilkinson as he departed moments later, being replaced by Conor Dimaio just seconds after the Spireites had conceded for a second time.

As expected, a slightly nervy atmosphere developed in the final minutes of the contest but for a long period this feeling did not appear to be being replicated by those on the pitch.

The final moments of normal time did provide a hearts-in-mouths moment for the Spireites, however, when Ryan Fulton spilled a cross. Mercifully though, the resulting opportunity was only headed over the crossbar by a Gillingham man.

Five additional minutes were not greeted with joy from the home crowd and rightly so as, after much attempted time wasting by Chesterfield, the visitors stole and equaliser in the dying seconds – Wagstaff firing home the rebound after Fulton had parried an initial effort in to his path.

A mixture of disbelief and frustration from the crowd at full time was echoed by manager Wilson, who said: “The goals we’ve conceded are arguable. The second penalty is a joke and the last goal is a travesty from our point of view.”

“It’s game management. We’ve got a few seconds left of the game and we didn’t control it properly. After controlling the game and playing so well, it’s a sickener.”

However, the Spireites boss did take some positives from the evening’s game. “I thought we played very well. We created lots of chances first half and a few more in the second. The two lads up front (Wilkinson and Dennis) have done excellently and Jon Nolan was excellent today too.”

“It’s difficult to give out plaudits when we haven’t won the game but I will. I thought there were some good performances out there tonight. It doesn’t feel like a defeat, a defeats feels much worse than this!”.

Chesterfield will be hoping to bounce back immediately against Bradford City, who travel to the Proact on Saturday afternoon.