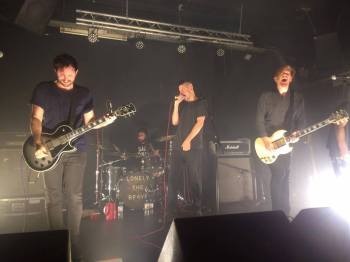 Lonely The Brave’s UK tour got underway in Sheffield on Friday night (30th September) with an impressive performance at the Steel City’s Plug venue.

On the back of releasing their second album, ‘Things Will Matter’, in May followed by a successful festival season which saw the Cambridge quintet hit the likes of Latitude and Y Not – Lonely The Brave finally headed out on a full 15-date UK tour across September and October.

The Sheffield date already felt like an unmissable occasion for fans of this exciting alternative group, but the fact that it was the very first date of the tour just made it extra special.

Support was provided by two local bands – the female-fronted ‘ambient rock’ quartet Eden Haze, and then the Rick Astley-covering Seconds Apart, whose energetic frontman Martin Cartlidge spent almost as much time on the floor as the stage in the intimate surroundings!

Lonely The Brave, fronted by singer David Jakes, finally arrived on the stage to a big ovation at around 9pm.

The second track of their new album, ‘Black Mire’, got their set underway and a mixture of old and new material was performed through the evening as the band filled the venue with their impressive rock sound.

‘Blue and Green’ proved the highlight of the first half of the set, as the crowd sang along loudly with Jakes’ emotional vocals.

Following a cover of Pink Floyd’s ‘Comfortably Numb’, the performance was raised to another level as the band powered through fan-favourites ‘Diamond Days’, ‘Trick of the Light’ and ‘Backroads’ before leaving the stage.

But the fans weren’t done with them yet and, after screaming for an encore, their wish was duly granted as the band returned for an encore of ‘Call of Horses’ and ‘Black Saucers’.

It was a truly faultless performance from one of the most exciting up-and-coming alternative rock bands of the moment which sent every person in attendance home with a smile on their face.

If you haven’t already, then I would highly recommend listening to Lonely The Brave and, if you can, catching a live performance! You won’t be disappointed.