Welcome to my third Q&A with stars of the Snooker world. 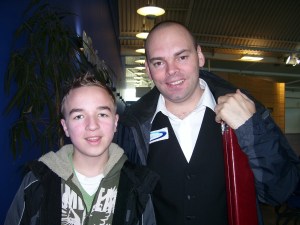 Straight from winning the Paul Hunter English Open in Leeds Stuart Bingham is third to be interviewed on ryan147.com. The current world number 21 beat Simon Bedford 6-0 in the final of the English Open but only won five matches in all of the 2008/09 season. However he did qualify for the World Championship beating Alan McManus in the final qualifying round before losing to Ronnie O’Sullivan 10-5.

Below is the interview, the first two questions are about the Paul Hunter English Open.

How did you find the Northern Snooker Centre as a venue?

I was at the Northern Snooker Centre last year so I knew how nice it was. I can’t believe how busy it gets, so that alone makes a good atmosphere in the club.

You obviously played well to win the tournament, but were there any specific highlights?

I was in Prestatyn last weekend for the Pro-Am series and lost in my first match to Craig Steadman. I just didn’t feel like my game was in a good state, not taking anything from Craig because he played well and has improved alot over the last few years. From there I went to the Academy and had a day there. I was practising with Sascha Lippe and Matt Couch, Matt said something to me about my cue action and I started to play well since then really. Lucky for me, I brought it with me this week and I think that was the turning point.
As for the matches, every match is important to win especially in the round robin stage and its always nice to beat my good friend Michael Holt! 😉
You always need a bit of luck to win a tournament and I was lucky against Peter Lines and Gary Wilson because they didn’t play particulary well and had chances to win a few of the frames that I won.

When did you start playing snooker?
I started to play snooker a month before my 14th birthday, so I was 13. 🙂

What made you become a professional snooker player?
I played alot of sports when I was younger and got quite good at most of them but snooker just took my fancy really.

Who were your favourite players from your childhood?
The biggest one is Steve Davis, just cause he won everything. Stephen Hendry as well because he dominated the sport the same as Davis.

What is your personal career highlight?
I’ve got a few, beating Hendry in my debut at Sheffield. Winning back to back Masters Qualifiers. But the main one is winning the English and World Amateur Championships in 1996.

Outside of Snooker do you have any sporting hero’s?
I have loads really. Anyone who dominates there profession. Tiger Woods, Jack Nicklaus, Sir Nick Faldo, Phil Taylor, Roger Federer etc.

What is your favourite Snooker Tournament?
Pontins Festivals!!! lol. The Masters and the World Championship.

What is your favourite Snooker Venue?
I was lucky to play at the original Wembley Conference so that and Sheffield are my favourites.

What was your highlight last season?
Qualifying for Sheffield. Had a disappointing season really.

What are your goals for the coming season?
Try and get to a semi-final or win a tournament and to stay in the top 32.

When you are not playing or have lost in a tournament do you still watch the games on TV?
Yes, I’m afraid so! I do still love the game, even if I’ve just got beat 5-4 or 10-9! Well, don’t love the game at that point after I lost! lol 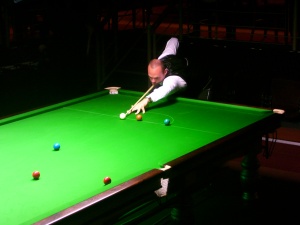 Stuart Bingham in action at the English Open