The great thing about the day is I hadn’t got a clue that Phil Taylor was even in Ingoldmells that day. I had just gone to visit Ingoldmells for an hour at the most when I saw a sign saying Phil Taylor live tonight and after comfirming it was true I was very excited.This of course meant I would be there most of the day now !

The exhibition was expected to begin at 4 o’clock, however due to problems with referee Bruce Spentley arriving late (traffic apparently) the exhibition did not start until 6 0’clock. Even with the wait it was still worth the wait just to see the legend from so close, and to see if I could get a picture with him.

When Phil did finally get on stage he had a little chat to the crowd (of which I was right at the front) before taking on his first challenger. Each leg was played over 701 and Phil was winning the legs easily until one challenger beat him.It’s not very often that ever happens announced referee Bruce Spentley. In the end Phil played 6 challengers and 3 raffle winners.

I was getting a little concerned that I would not get a chance to get a picture with ‘The Power’ so after the first challenger had been beaten,Phil Taylor was stood right in front of us on the stage. My Dad shouted “Phil, my son has been waiting 3 hours in the hope of getting a picture with you.”  and to his absolute credit he came over to the packed crowd and pointed to me and said “come on up”. With that I got on stage and “The Power” even took the time to move back and let my Dad get on stage to take the picture. He then shook my hand and made my day. We were extremely lucky as after that the security would not let anyone near the stage for a photo.

It was amazing to watch the 14 times world champion, 10 times world matchplay champion, 8 times world grand prix champion and and winner of a total of over 50 major tournament wins from so close. Unfortunetly after Taylor’s 5th game we had to leave and rush across to the Skegness Embassy to watch the Chuckle Brothers! (who I also got my picture with).

See below for photos.

Me and Phil ‘The Power’ Taylor

Outside Joe’s Beach Bar just as I found out the news.

Joe’s Bar just as we arrived back for the exhibiton. 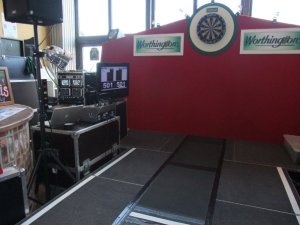 The Power has a few practice darts.

Phil chats to one of his challengers 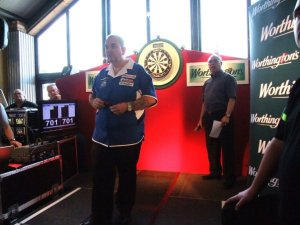 Phil Taylor awaits his next victim! 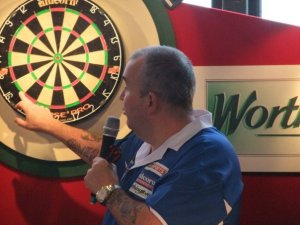 Phil asks his opponents favourite double, which he answered with double 16. Phil then said he had to go for double 20 to win the match!

Me with Barry and Paul Chuckle