On Tuesday 8th September I made my first ever visit to Frickley Athletic’s Tech5 Stadium to watch them play bottom of the Unibond Premier Division, Durham City.Frickley themselves were only one place above them.

We arrived 45 minutes before the game and had a good look around before entering the ground.Unfortunaetly it started raining as soon as we entered the ground so we went into the social club, luckily that was the only rain we would get all night. The social club was a nice small club, with various different Frickley Athletic items such as DVD’s, programmes, scarfs as well as lots of Frickley Athletic fans having a drink before the game.

The game kicked off infront of a crowd of 193 and Frickley immediatley dominated the game. Durham City got into financial difficulties after winning Unibond division 1 last season and lost most of there players. Since the start of the season Durham’s record had been played 7, lost 7 conceding 31 goals in the processs while scoring only 3. This game looked to be no different with Frickley having many chances but failing to score.

On the 38th minute Durham City keeper Marc Riches and Frickley’s Neil Towler collided when jumping for a ball that had been crossed into the box. Marc Riches then began to ,what looked like to us sat in the stand, attack the striker and threatening him. Riches was immediatley sent off for violent conduct by the referee and Towler booked for the challenge.

When everything had settled down play continued and on the 45th minute Rufus Ayre gave Durham City a shock 1-0 lead at half time with a good header into the far corner.

During half time we walked all round the pitch getting plenty of photographs and generally having a good look around the ground  and the club shop.

It took Frickley just 8 minutes into the second half to put the teams level with Neil Towler flicking the ball past Durham’s reserve keeper Rhys Jobling from 6 yards.

Frickley continued to have plenty of chances as they had throughout the match, and on the 74th minute they won a penalty when Frickley’s Lee Morris was sliced down in the box. Frickley scored the penalty to take a 2-1 lead and it was obvious there was no way back for Durham now. Frickley sealed the match 3 minutes later with a great shot from outside the box that went straight into the top corner.

As we went and stood next to the tunnel after the match when the players were walking off the pitch you could really see the difference. Durham were full of young lads that didnt look much older than me and after losing most of their players during pre season it looks like it could be a worrying season for Durham City FC

I had a great time at Frickley Athletic, it was a nice ground with nice people there and an action packed match with 4 goals, a sending off and a penalty!

I hold up the programme in the Frickley Social Club

I watch the action

The view from the Main Stand

Durham City’s keeper gets sent off 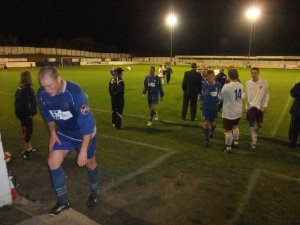 The players walk off the pitch