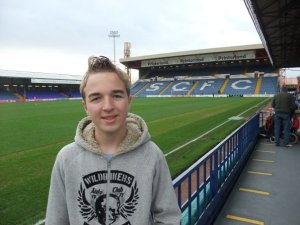 On Saturday 7th November I went to watch a match at Stockport County’s Edgeley Park for the first time. They were playing Tooting and Mitcham United of the Ryman Premier Division in the FA Cup 1st Round.

I had visited Edgeley Park once before back in February 2008 but when I had been shown around the dressing rooms. However I hadn’t been inside the ground so we decided to make the short journey to Stockport to watch their FA cup tie against Tooting and Mitcham United, who are 4 levels below County in the football pyramid.

We got to the ground early and as we arrived the Tooting and Mitcham players were just getting off the team coach. We watched them for a while then went to buy our tickets. At first we were going to sit on the open away end but when it began pouring it down with rain we decided otherwise and chose to sit in the main stand instead.After buying a programme from the club shop and having a wander around we went into the ground about 45 minutes before kick off. My Dad used this time to get plenty of photos of the ground.

The game kicked off at 3pm in front of 3,076 people and Tooting had their best chance of the game early on but Simon Parker  put the shot was put just wide. It took Stockport County just 13 minutes to take the lead. Peter Thompson pounced on the chance after Dave King had saved Paul Turnbull’s shot.

After this Stockport completely dominated the game and the gulf in class sadly became apparent as Tooting seemed to struggle to get the ball and make anything happen. It was 2-0 seven minutes later when David Poole stuck the ball into the bottom corner.

County had many chances to add to their lead including a 25 yard volley that was tipped over by keeper Dave King. They made it 3-0 as Carl Baker scored from the spot after Thompson was brought down in the area

Tooting started the second half very strongly having a few chances but they couldn’t find the goal with some good defending from Stockport. County made it 4-0 with the move of the game including passes from several players before Paul Turnbull scored.

Turnbull scored again on the 72nd minute to make it 5-0. Stockport missed some great chances to make it 6 but overall it was a good performance from the League 1 side. The ground was also very nice with a great 2 tiered stand behind the goal. 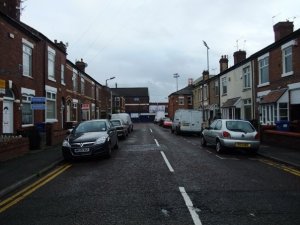 The road that leads to Edgeley Park 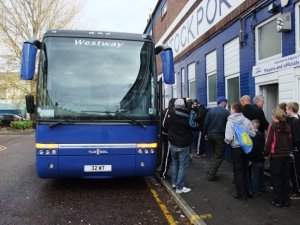 The Tooting and Mitcham players arrive 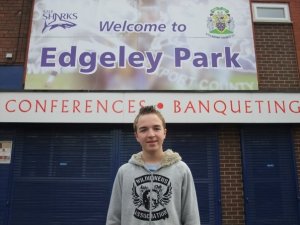 I hold a Stockport County ball up in the club shop 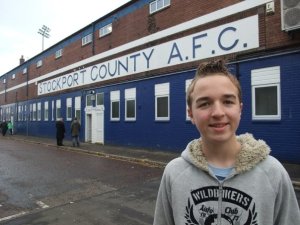 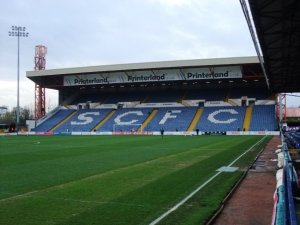 The open away end

Our view of the match

The Tooting players warm up

The players shake hands before the game 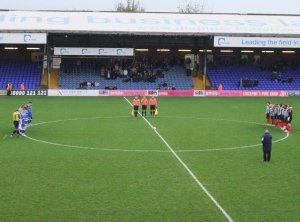 A minute’s silence before the game

County make it 3-0 from the penalty spot 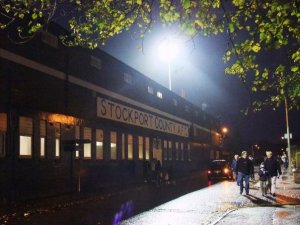