On Wednesday December 2nd 2009 I visited Chesterfield to watch them play Crewe Alexandra in the final ever scheduled evening game at the Saltergate.

The Spireites came into this game with a superb home record this season, 8 wins and 1 draw. If the Spireites won the game by 4 goals or more they would go 3rd, but a smaller victory would still put them in 4th place. Meanwhile Crewe Alexandra came into the game in the bottom half of league 2 but having won 4 of their 9 away games.

We arrived early on to collect our half season tickets meaning we are guaranteed seats for the last ever match at Saltergate against Bournemouth on May 8th 2010, along with the rest of the last 12 games.

The game kicked off at 7.30pm and got off to a flying start. Chesterfield dominated the start of the game, looking like they could win this match comfortably. After just 7 minutes Jack Lester was tripped in the box to give Chesterfield a golden opportunity to take the lead. Davide Somma, making his debut  and also becoming the 1000th player to play for the Spireites, stepped up but a tame penalty was saved by Crewe keeper Steve Phillips.

Despite this setback Chesterfield continued to dominate the match with Crewe hardly having a chance. On 21 minutes the referee gave another penalty after Jack Lester had been brought down in the box for the second time. This time Wade Small stepped up and but once again the Spireites missed the spot kick.

Crewe made Chesterfield pay for these two misses and took the lead themselves on the 25th minute when Grant’s pass cut through the Chesterfield defence and found Clayton Donaldson who put the ball in the net. Despite Chesterfield dominating the game up to this point, it quickly became 2-0 to Crewe. Ashley Westwood’s free kick beat everybody including Spireites keeper Tommy Lee and ended up in the net. Jack Lester nearly pulled one back for Chesterfield but he hit the bar and the teams went in at half time with the score 2-0 to Crewe.

Chesterfield came out fighting in the second half having plenty of chances to get back into the game. Drew Talbot, brought on in place of Davide Somma early in the second half, pulled one back on the 73rd minute. Ian Breckin’s shot had hit the bar and the ball fell to Talbot who fired the ball home from close range.

As Chesterfield tried to find an equaliser Crewe went down the other end and made it 3-1. Luke Murphy scored to almost certainly bring the Spireites’ unbeaten home run to an end. Jack Lester managed to pull it back to 2-3 with a superb piece off skill inside the box but it turned out to be too little too late and Crewe went home with all 3 points.

After the game I met Crewe Alexandra manager Dario Gradi, who was the longest serving manager between 1983 and 2007. He stepped down from his managerial role in 2007, handing first-team responsibilities to Steve Holland, and became technical director, however when Holland left in 2008, Gradi came back as caretaker manager. I also got photos with man of the match Dave Perkins, Chesterfield’s Kieran Djilali and manager John Sheridan. Finally as we were leaving the ground I met Crewe’s Clayton Donaldson and Joel Grant as they were getting on the team coach.

It had been an exciting game to watch but the scoreline was very disappointing knowing that if Chesterfield had scored the two penalties we would have won the match and got 3 points. 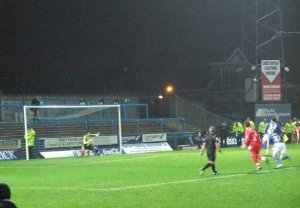 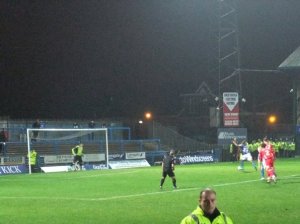 …and Wade Small misses the second 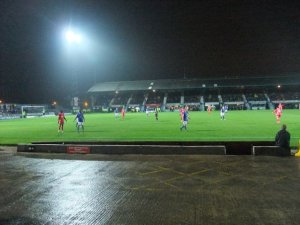 Our view of the match 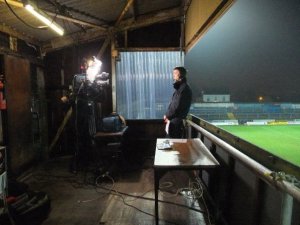 The Sky Sports team in the TV gantry

Only 13 games left at Saltergate…and I will be at every one of them.

View from the away end 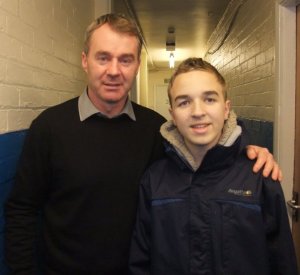 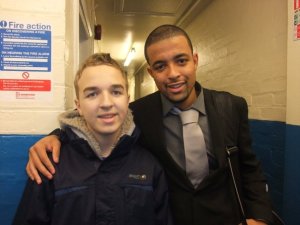 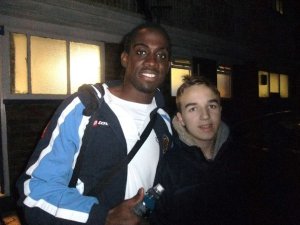 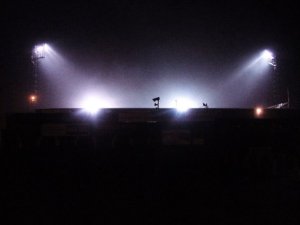