On Thursday 8th April 2010 I went to the Crucible Theatre to watch the first ever ‘Snooker Legends’. The players included Jimmy White and Alex ‘Hurricane’ Higgins who returned to the Crucible for the first time in over 15 years.

Due to not living very far from the Crucible, we caught the bus to the event and just as we were arriving my Dad spotted snooker legend Cliff Thorburn walk past on his way to the Theatre. I went up to the 1980 World Champion and he was happy to have a photo with me, despite telling us he was running a little late for the VIP meet-up before the event.

Knowing that all the players were inside, we decided to go in and have a look at the newly refurbished Crucible. The front looks wonderful now, with the word CRUCIBLE up in rainbow coloured lights which looks great. However, Tudor Square is still a bit of a mess, with building work still being done on it. It doesn’t look like it will be finished in time for the World Championships a week on Saturday.

Just as we were heading in our friend James (or Hairbear as he is probably better known) spotted us and we had a chat about the upcoming World Championships as well as tonights event.

The set for the event looked brilliant, a blood red colour to mirror how the Crucible looked back in the day. As the audience began to arrive old clips from the World Championships began playing on the tv screens and the Pot Black music began to play.

1979 UK Champion John Virgo was the first man out. He told a few jokes and played some trickshots with help from members of the audience. Sadly I didn’t get chosen to go up on stage but it was very entertaining and warmed the crowd up brilliantly.

The first snooker match was a repeat of the 1991 World final, John Parrott vs. Jimmy ‘Whirlwind’ White. The format was 2 frames, if it was 1-1 then there was a black ball play off to decide who went into the legends final. Michaela Tabb was the referee for the matches.

Jimmy started the first frame well, knocking in a 74 break before missing the yellow when he was on for a 101. John Parrott levelled the game with a good break to take it to the black ball decider. Jimmy won the toss and decided to let John play first. Jimmy had the first go at potting the black but missed and JP cut the black in and booked his place in the first ever legends final.

The second match was a repeat of the 1980 final between The Grinder and The Hurricane. Alex Higgins came out to a huge applause from the packed arena but sadly he didn’t look well at all. He had been in hospital just days before and he looked very weak and frail.

Neither Cliff nor Alex were up to the quality of the previous match, but it was still entertaining to watch the legends play. Cliff Thorburn took the first frame, despite Alex nearly levelling late on. Thorburn also took the second frame with ease to defeat the Hurricane, who’s highest break was 8, on his Crucible return.

There was then a 15 minute interval and as we got out to the foyer Jimmy White was already signing for fans. I had a photo with the Whirlwind and got him to sign my programme for the event. I also spotted ex snooker player Patsy Fagan, and former Nottingham Forest captain John McGovern, who led the side to the 1979 and 1980 European Cup titles.He followed Brian Clough around several football clubs in the seventies including Derby County and Leeds United.

The first game after the interval was a game of doubles between the teams of Alex Higgins and auction winner Gill, who had flown over from Canada and paid £530 in the auction to play this once in a lifetime game at the Crucible. The other team had Jimmy White and raffle winner Roy.

Firstly there was an amusing moment with Roy, who was quite old, trying to get down to the table with help from John Virgo, before going out and round so he could get down the stairs at the side.

Alex started the frame with a decent few pots, which included a blue that went the full length of the table into the top pocket. A few shots later Jimmy White got in and made a 101 clearance, with help from his partner Roy who potted the black before getting asked by John Virgo how it felt to make a 101 break!

The last game of the evening was the legends final between John Parrott and Cliff Thorburn. Due to time getting on it was made into a best of 1 frame shoot out to decide the winner. John Parrott got in and made a good break and almost cleared, missing just the last black. He was awarded the trophy, which was given by referee Michaela Tabb, to become the first legends champion.

After the event, all the legends were out signing and having photographs with the fans. I got John Virgo, John Parrott, Cliff Thorburn, Michaela Tabb and Alex Higgins to sign my programme, as well as having photo’s with John Virgo and the Hurricane. Alex never spoke once during the signing and he looked very ill, it was a sad sight.

After talking to a few more people we knew, we set off home at the end of what had been a brilliant night. We will, of course, be back at the Crucible in just over a week to see the 2010 World Snooker Championship….

Below are the photos, since there are so many I have split them up into before, 1st half, interval, 2nd half, after.

With another legend, Hairbear! 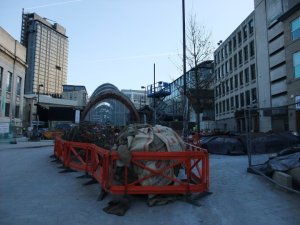 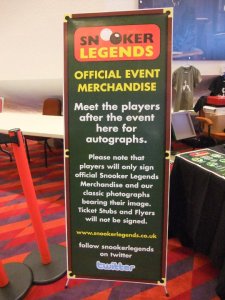 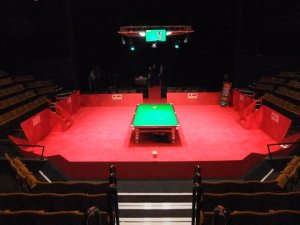 The Snooker Legends set up

Clips are played on the TV monitors from various World finals

John Virgo warms up the audience 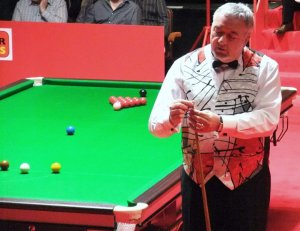 JV plays a few trickshots too 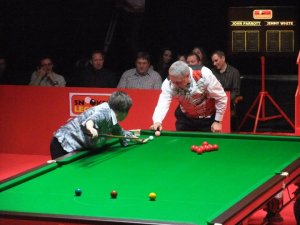 An audience member attemps one of JV's trickshots 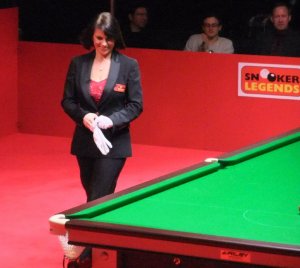 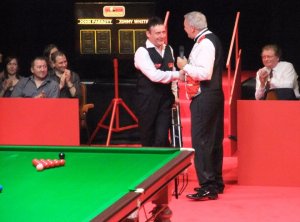 and his opponent Jimmy 'Whirlwind' White 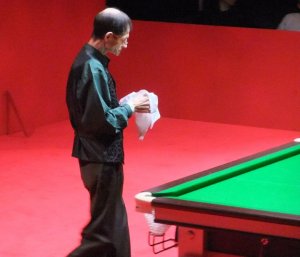 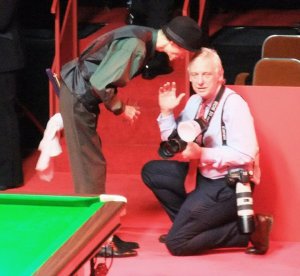 Alex tells off a cameraman for putting him off

Jimmy and his management team 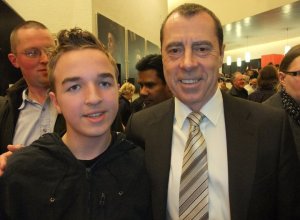 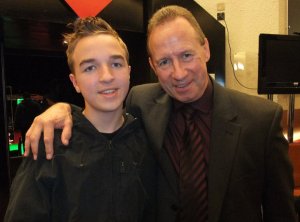 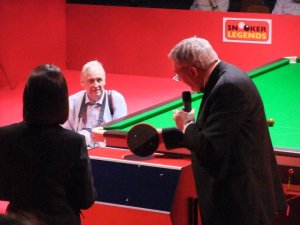 The raffle is drawn by John Virgo 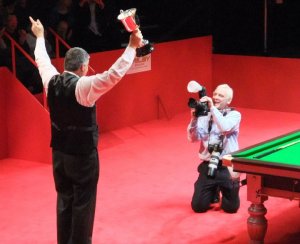 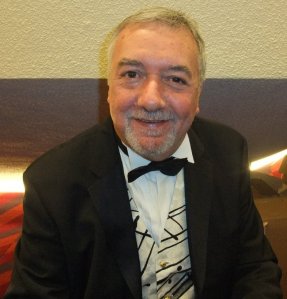 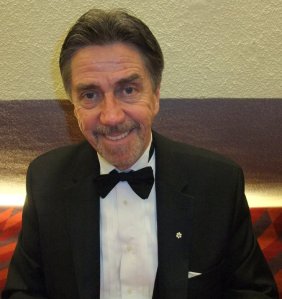 Me with the Hurricane

Alex is still popular with the fans

The Crucible at night