On Sunday 18th April 2010 I was back at the Crucible once again for the snooker. I watched a former world champion play a former world runner-up and met some of the legends of the game.

It wasn’t quite as lovely weather as yesterday but the sun still came out. With it being Sunday it was also the a lot quieter, which is usually the case on the opening Sunday in comparison to the saturday. Even so it was still exciting to be there.

While walking down the road I spotted Willie Thorne, who is obviously very noticeable from behind. I went up to ask for a photo with Willie when I realised who was with 1985 World champion Dennis Taylor. This made the photo even better, being with two legends of snooker!

I saw various players around during the day but didn’t bother them for a photo as I have met them plenty of times before. Steve Davis, Ali Carter, John Parrott and Liang Wenbo all passed us while the morning session was on. I even saw Ronnie O’Sullivan in a cafe but there was already a few autograph hunters outside and I thought it was a bit rude to wait for him outside a cafe while he had his dinner!

After chatting to a few of the people we knew, if was time to go in and watch the afternoon session. We were watching Mark Selby, who in my opinion is one of the favourites to win it this year against 1997 World champion Ken Doherty, who qualified this year by beating Jimmy White (10-3) and Joe Swail (10-1).

This was the second session, the first of which Mark has won 6-3 to give himself a commanding lead coming into the second session of the match. Selby took the first frame with two breaks of about 40, then extended his lead even further with a break of 82. Ken Doherty managed to pull one back with a 61 break but Mark took the last before the mid session interval to lead 9-4. In the frame after the interval Mark Selby got in and looked set perfectly for a maximum with reds and blacks. On 81 however he overran the white slightly to leave it tight on the cushion and the black rattled in the jaws. Despite this disappointment Mark Selby was still through 10-4.

We decided to go out for a wander after this rather than watch Ali Carter vs Jamie Cope. This turned out to be a good move as I got a picture with 1979 World champion Terry Griffiths in almost the exact same spot I had met Willie and Dennis earlier in the day! Back up in the foyer before going back inside for a couple of frames of Carter vs Cope I met Angus Loughran or ‘Statto’ from Baddiel and Skinner’s Fantasy Football League show.  Mark Selby was also in the foyer after his win and so I had a picture with him too.

We then popped back in for two frames of the Carter/Cope session in which Ali increased his lead for 5-1 to 7-1, before heading of home. Another wonderful day of snooker.

at the Crucible Theatre for the 5th consecutive year 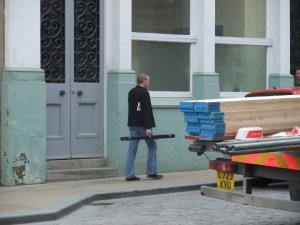 Steve Davis walks up the street

Liang Wenbo has pictures with some Chinese fans 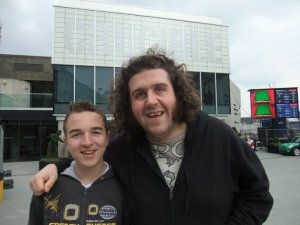 I add a message to the board 'Check out ryan147.com' 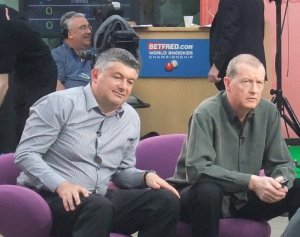 John Parrott and Steve Davis in the studio

Mark Selby after his match 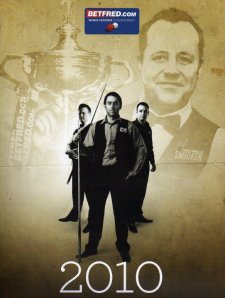