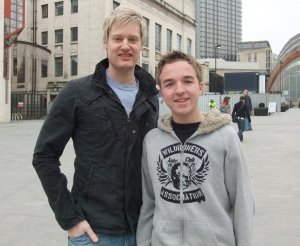 On Monday 19th April 2010 I was back at the Crucible Theatre for the World Championships and the Ronnie O’Sullivan v Liang Wenbo match.

Sadly I was unable to go for the whole day as I was at school. However my Dad was off so he went to the Crucible to get some photos and watch the Ronnie game.

First round winner Martin Gould was the first player around outside being congratulated by the fans. He was happy to pose for some photos in his fancy new suit that has been especially made for the World Championships. Also around was Marcus Campbell, who faced Mark Williams in the evening, who was also happy to pose for photographs and recognised my Dad from when we met him in KFC at the qualifiers last month!

It was now time for the snooker to begin. Ali Carter was playing Jamie Cope on the other side of the curtain, but that match finished quite quickly as Ali took the match 10-4 after taking a 7-2 lead in the first session.

Ronnie O’Sullivan and Liang Wenbo shared the first two frames of the session, before Ronnie made back to back centuries to take a 3-1 lead going into the mid-session interval. Ronnie played well and ended up leading the match 7-2 at the end of the session. I watched the last frame of the match where Ronnie looked nicely set up for a maximum with the reds nicely set, but he missed a simply red with the rest when on the 60 mark but still took the frame.

While my Dad was inside I chatted to a few people outside watching the snooker on the big screen outside. I spotted Neil Robertson in Tudor Square and he was very friendly and happy to have a photo. I also spotted Gerard Greene, who plays Shaun Murphy in round 1, and had a picture with him.

As the Ronnie game ended we were stood at the bottom of the steps which everyone goes down to get out of the venue. My Dad spotted darts player Adrian ‘Jackpot’ Lewis  walk down the stairs and he was happy to have a picture. Adrian was very friendly and seemed delighted to be recognised at the snooker. I have now met 3 top darts player – Phil Taylor, Peter Manley and Adrian Lewis. Another celeb my Dad spotted walking past was actor Dean Gaffney, from Eastenders and Extras as well as Im a Celebrity Get Me Out of Here!

Other snooker players I spotted and had pictures with were Ali Carter, Mark King, Stuart Pettman, Graeme Dott, Mark Davis,  and John Parrott…oh and of course Hairbear!

MC Rob Walker stopped and chatted to us for a good 10 minutes discussing who we thought would win the World championship this year amongst other things. Rob is always very friendly to us.

By now everyone had gone inside for the evening session so we decided to head off home. So far I have seen at least a frame every day of the tournament. 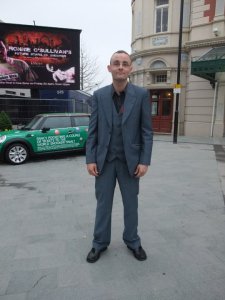 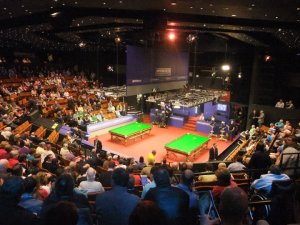 View from the back row 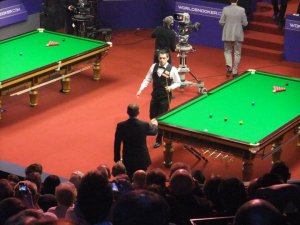 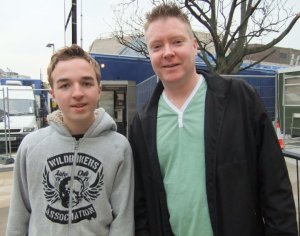 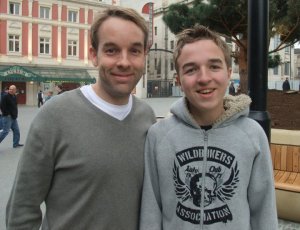 Some of the usuals