On Wednesday 28th April I was back at the Crucible. I met Steve Davis (again) and Chris Edwards from the rock band Kasabian, before going in to watch two brilliant quarter final matches come to an end.

Originally I had come down to the Crucible to go in the Cuezone and chat with various snooker friends I have , however when Janie from Global Snooker gave me a free ticket for the evening session, I decided that I would go in to watch the snooker.

Before the evening session began I met Steve Davis in the Winter Gardens and Kasabian’s bass guitarist Chris Edwards who had come to watch Mark Selby play.

The two matches for the evening session were both perfectly poised. Shaun Murphy vs Ali Carter, the match that I was watching, was dead level at 8-8, while Ronnie O’Sullivan was just leading Mark Selby 9-7.

Rob Walker chatted to the crowd before the live broadcast about how he introduced Steve Davis as ‘Dennis Taylor!’ earlier in the day before Steve’s quarter final against Neil Robertson. Luckily Steve saw the funny side, even borrowing a pair of glasses from the audience and putting them on upside down.

The first two frames of the Carter v Murphy match started brilliantly, Ali making a 122 break before Shaun returned with an 81. The players also shared the next the next two frames to go into the mid session interval at 10-10. Over on the other table Ronnie O’Sullivan was leading 11-9.

Shaun took two of the next three frames to lead 12-11, before Ali took the 24th frame to lead us to a deciding frame. Meanwhile my attention wandered over to the other table, which I could see most of from where I was sat. Mark Selby, who started the 9-7 down, won the 24th frame on the brown to defeat 3 time world champion Ronnie O’Sullivan 13-11 and book his place in the semi finals.

Shaun Murphy was in first in the decider, knocking in a 35 before letting Ali Carter in. Ali potted up to the yellow before missing it, but to everyone’s surprise Shaun missed the yellow too! Carter then cleared the colours to win the match and go through to face Neil Robertson in the semi finals. 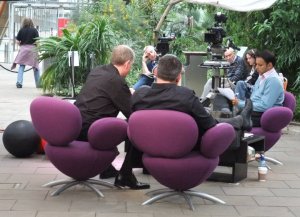 The Studio's last day in the Winter Gardens

John Parrott having a laugh in the studio... 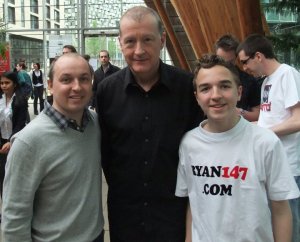 We both had a pic with Steve today.. 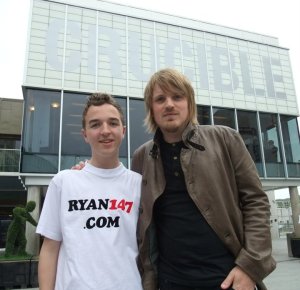 The last session with the two table set up 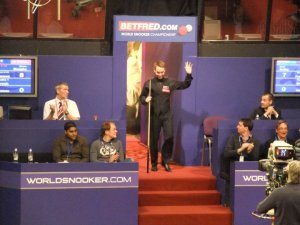 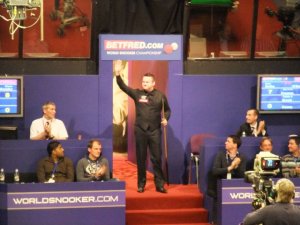