On Saturday 21st August 2010 I went to the b2net stadium to watch Chesterfield face Hereford United.

As we first arrived I spotted Hereford United manager Simon Davey arriving at the ground, and so I had my picture taken with him. Chesterfield striker Craig Davies, who was suspended today after getting sent off against Barnet, and I had my picture with him too.

We then went to meet Vinny Goodfield, who we had briefly met before the last match at Saltergate, and his wife Beckie. They had come to watch Chesterfield today, before going to Real Mallorca v Real Madrid the following weekend.

The stadium was sadly emptier that the Barnet game, with only a few Hereford fans. The total attendance was 4,970.

After a decent start from Hereford, the Spireites began to take control of the game. On the 9th minute Jack Lester was pulled down in the area, and the referee immediately gave a penalty. Danny Whitaker, who signed in the summer, stepped up and put the ball in the net to give the home side an early lead.

Chesterfield now began to dominate the game, and on the 33rd Whitaker got his second goal, though it did take a huge deflection.

As the players came out in the second half, there seemed to be some arguments. Players of both teams were arguing with the referee about something, though we weren’t sure what it was all about.

Tommy Lee pulled Manset down in the box at the start of the second half, giving away a penalty. Valentine stepped up but Tommy Lee made a brilliant save and tipped the ball wide.

After this it was all Chesterfield, and on the hour mark Danny Whitaker completed his hat trick. Jack Lester tried to take the ball around the keeper, but he lost the ball and it fell to Whitaker, who put in the almost empty net.

Three minutes later Simon Ford jumped higher than everyone else as a corner was whipped in, and he headed the ball home to mkae it 4-0.

A brilliant performance from Chesterfield, and if they keep playing like that, the Spireites will be in with a great chance of promotion.

After the game, I met lots of players as they came out of  the players and officials door.  The Chesterfield players I met were Jack Lester, Jack Hunt, Tommy Lee, Simon Ford, Dean Morgan and Mark Allott.

Hereford are the second league opponents at the b2net stadium 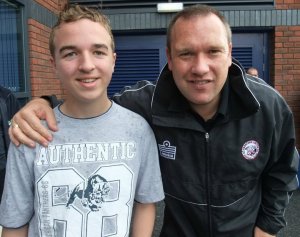 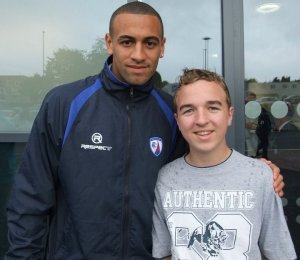 with Beckie and Vinny Goodfield 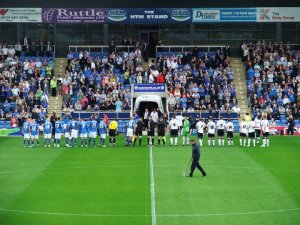 fans in The Karen Child Kop

The captains, officials and mascots pose for photographs

Our view for all 23 home games this season 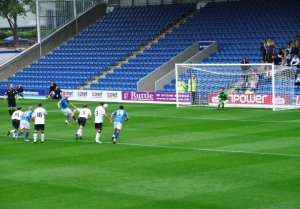 Danny Whitaker makes it 1-0 from the spot

Players fight for the ball 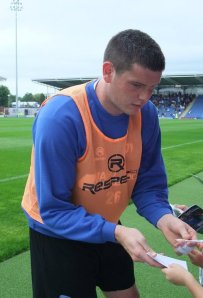 Shane Redmond signs for fans at half time

Some arguments before the start of the second half 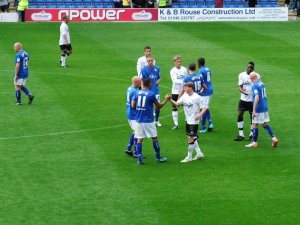 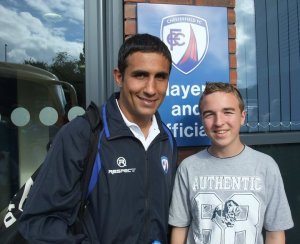 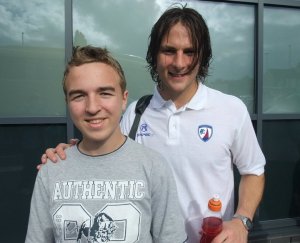 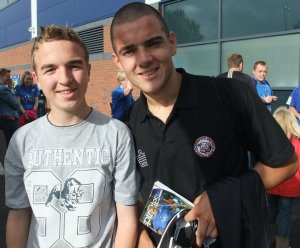 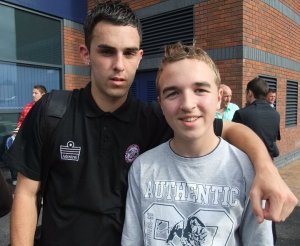 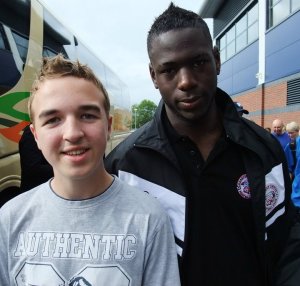 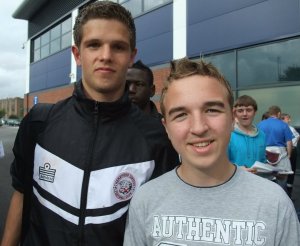