On Saturday 4th September I went to watch Chesterfield play their third league match  at the b2net stadium against Lincoln City.

Todays game marked 10 years of football for me. My first game was at Saltergate, watching Chesterfield lose 2-1 to Barnet on 2nd September 2000. Incredibly 10 years later Ian Breckin is still at the club, though of course he did leave and come back.

The first thing we did when we arrived at the stadium was go to the club shop to see if they had got any kits in. I did finally managed to get one, and I think its a very nice kit.

As we headed out of the club shop, we bumped in to David Thornhill, a Norwich City fan and groundhopper, who we know from Facebook. He and a couple of his friends had come to visit the B2Net Stadium for the first time today.

When we first went inside, around half an hour before kick off, the stadium was dissapointingly empty. However, much to my delight, it filled up to a very respectable 6,429, just a couple less than the Barnet match.

Lincoln looked quite dangerous early on, having most of the chances and putting the home side under a bit of pressure. Craig Davies broke through early on and looked set to score, but he attempte to squar the ball to Lester, who couldn’t quite reach it, so the chance dissapeared.

Chesterfield began to slowly gain control of the match, and on the 36th minute Dwayne Mattis got a glancing header to the ball from a cross and it went in to the net. It was another goal from Mattis, who has had a terrific start to life at Chesterfield.

Chesterfield looked to half the game wrapped up by the hour mark, when a beautiful pass from Jack Lester left Craig Davies 1 on 1 with the Imps goalkeeper and he cooly slotted the ball home to make it 2-0.

Ben Hutchinson pulled done back for Lincoln on the 88th minute, to leave a nervy ending for the home suuporters, but the Spireites held on to the 3 points. Thats 3 wins out of 3 at home for Chesterfield, who are still unbeaten in the league this season.

After the game I met lots of players from both sides. I got a photo with Ian Breckin, who played in my first match, and today. Goalscorers  Dwayne Mattis and Craig Davies, and Jordan Bowery also had pictures with me.

Another great day of football, and a good win to celebrate my 10th anniversary as a Spireite! 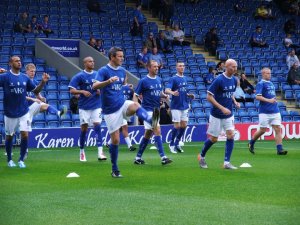 The players warm up

Some of the 688 Lincoln supporters present today

The flag at the top is in memory of Keith Alexander 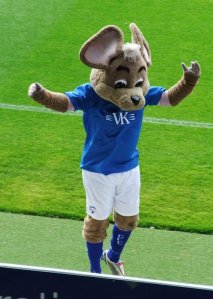 The players are about to kick off

Lincoln pile on the pressure early on 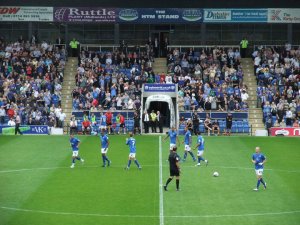 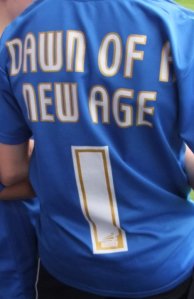 On the back of someone's shirt at half time 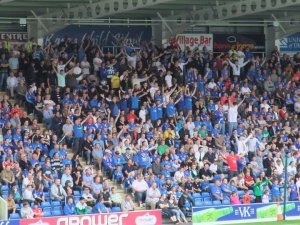 Mark Allott celebrates his 300th cap with an injury in the balls! 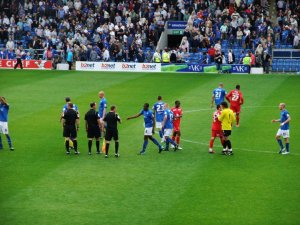 It ends 2-1 to Chesterfield 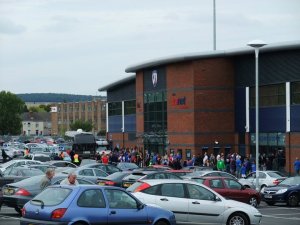 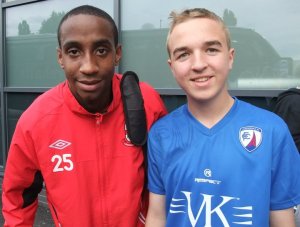 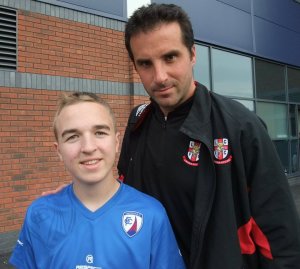 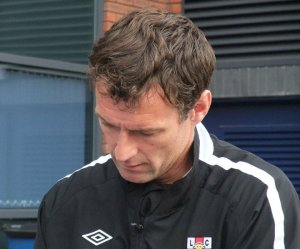 10 years as a Spireites