On 11th September 2010 I went to watch Nottingham Forest play Millwall at the City Ground. This was the first time I had seen a match at the ground, though I did briefly walk around outside back in 2008.

With Chesterfield away at Morecambe, we decided that we would find a different match to go to and after looking at the fixture list we decided on Nottingham Forest.

After a short train journey to Nottingham, we arrived at around 12 o’clock. Before heading to the City Ground, we went to see some of the sights of Nottingham.

The first place we visited was the statue of Brian Clough statue in the City Centre. The statue was unveiled by Clough’s family on November 6th 2008.

Brian Clough was Forest’s manager from 1975 until 1993. He was the clubs most famous and most succesful manager. In his time at the club they won one First Division title, four League Cup’s, two European Cup’s, one charity shield and one european super cup. His most succesful years with the club were in the 1970’s, when he worked alongside Peter Taylor, his friend and assistant.

We then visited the statue of another Nottingham legend, Robin Hood, which is situated next to the castle.

Nottingham Forest and Notts County are the two closest football stadiums in England, so we had to pass County’s Meadow Lane to get to the City Ground. We had a quick look inside Meadow Lane, which I had seen a match at back in 2007 when Chesterfield lost 1-0. The club shop was open so we popped in there too before heading towards the City Ground.

It was a beautiful day, and walking across the Trent Bridge you could see the water shining next to the stadium. It has to be one of the best views of any football ground in the world.

There were lots of memorabilia stalls outside the ground before kick off, selling everything from t-shirts to scarfs to programmes from Forest’s glory days when they won the European Cup.

While walking around outside my Dad spotted Forest legend Kenny Burns and I had a picture with him. He was one of the Forest European Cup winners and played under Brian Clough in the clubs glory years.

The ground was brilliant inside, and from where we were sat we could see the Trent Bridge. It did make me wonder why Forest are planning on moving if England get the 2018 World Cup, as the stadium is perfect for them and the World Cup.

Another thing we had a good view of from our seat was the Millwall fans. They do have created a bad reputation for themselves of the years, and the away end was packed full of fans, though to be fair they didn’t cause any trouble and just seemed to make the atmosphere even better, singing and shouting all through the game.

Millwall got off to the perfect start when Steve Morison headed the ball into the bottom corner after just 5 minutes, right in front of the Millwall fans.

Just four minutes later Forest had a great chance to equalise from the spot, after Nathan Tyson was brought down in the area. However, Dexter Blackstock stepped up and blasted the ball over the crossbar, meaning Forest remained behind until half time.

Forest came out in the second half looking like a different side. They had almost all of the chances, and if it wasn’t for Millwall’s goalkeeper, they could have scored 3 or 4 goals.

They had 3 shots saved within quick succession by Millwall’s goalkeeper Forde and it looked like Forest weren’t going to make all the pressure pay.

Then on the 80th minute, Dexter Blackstock made up for his missed chance earlier on by heading the ball home on the 80th minute. Millwall almost went down the other end and scored straight away, but the ball went just past the post.

A draw was probably a fair reflection of the game, with both sides having plenty of chances and playing quite well.

We walked across the Trent Bridge in amongst a crowd of nearly 20,000 people, then headed back to the train station with lots of Millwall fans, followed and filmed by the police on horses and with dogs!

I enjoyed my day at Nottingham Forest. The ground was lovely and the game was very entertaining and overall it was a great day. 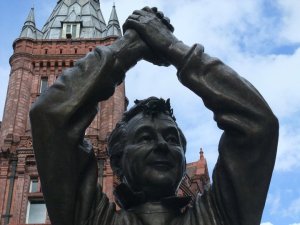 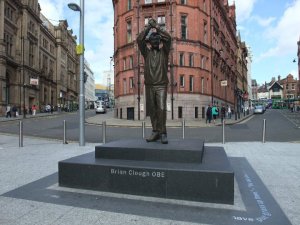 "I wouldn't say I was the best manager in the business. But I was in the top one."

"Rome wasn't built in a day. But I wasn't on that particular job." 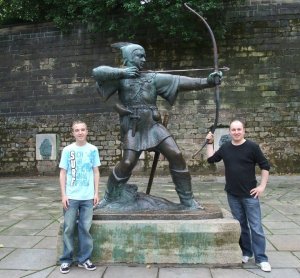 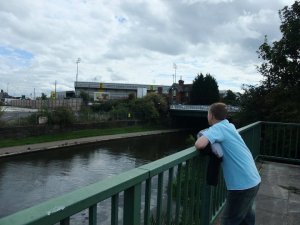 I look over the water at Meadow Lane 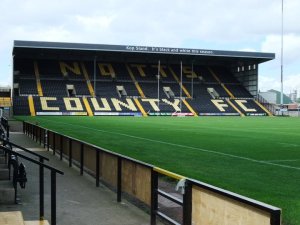 Inside the home of Notts County

The Club Shop at County

One of the nicest views of any football stadium 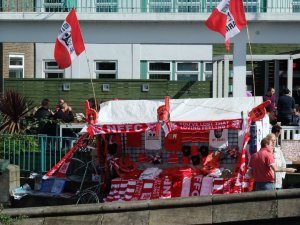 One of many stalls outside the ground

Outside the ground before kick off 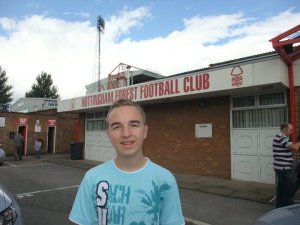 A smaller statue of Brian Clough inside the club entrance 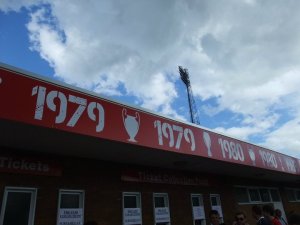 A Forest fan is interviewed before the game 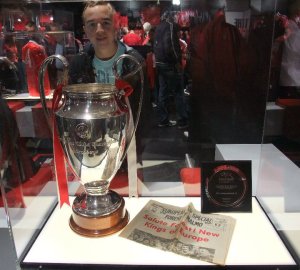 A replica of the European Cup

A framed replica shirt signed by the 1979 European Cup winning side. Shortly after this had been taken it was bought for £500

A T-Shirt on sale at one of stalls outside

I hold up todays programme

Inside the City Ground 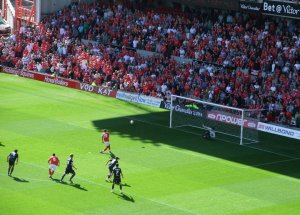 Dexter Blackstock puts the penalty over the bar

I hold up the programme inside the City Ground 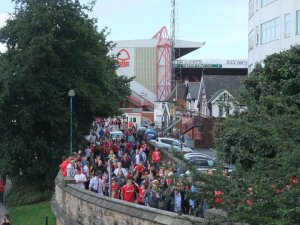