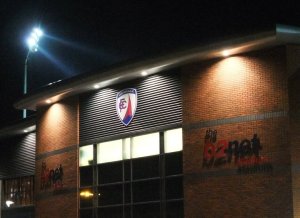 On Tuesday 23rd November 2010, I was back at the B2Net Stadium to watch Chesterfield face a struggling Oxford United.

Despite defeat to Burton Albion in our last home game, Chesterfield still sat at the top of the NPower League 2, and against Oxford United, who had lost their last 5 games, the Spireites were looking to consolidate their place at the top.

Chesterfield started brightly and after just 14 minutes Ian Morris scored his first ever goal in Chesterfield colours to put the Spireites 1-0 ahead. The Spireites continued to play well in the first half, and it remained 1-0 at the break with Chesterfield looking good value to stay at the top.

However, Oxford hit Chesterfield on the break just before the hour mark and Tom Craddock put away a free header to level the game. After this goal Oxford had plenty of belief, and began looking for a winner. On the 69th minute a beautifully worked goal ended with Steven MacLean putting the ball in the net to give the away side the lead.

Chesterfield pushed for an equaliser but they failed to find the net, meaning a second consecutive home defeat and a fall down to second place in the league, below Port Vale.

After the match I met Oxford’s top goalscorer James Constable.

The second ever night match at the B2Net Stadium 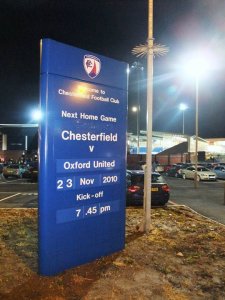 The U's are the next opposition

The players line up before kick off

The Oxford away support

Mark Allott is captain today with both Mattis and Breckin out. 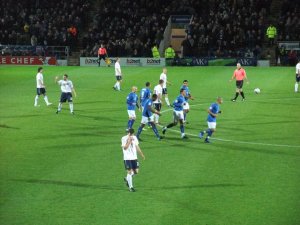 Craig Davies stays behind to applaud the fans

After a second consecutive home defeat