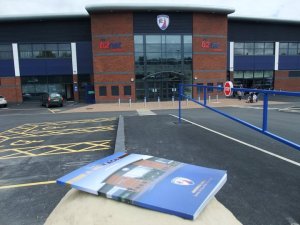 As a Chesterfield supporter, the 2010-11 season has been one that I will never forget. After leaving Saltergate and moving to our new home of the B2Net Stadium, I knew that it would be an exciting time to be a Spireite, but the way the season has gone it has surpassed mine and everyone else’s expectations.

The season began back on August 7th with the stadium making its bow against Barnet, which coincidentally were the opposition for my first ever match at Saltergate. There was a real buzz about the stadium on the opening day with much hope and expectation for the season ahead. Manager John Sheridan had built a strong squad, bringing in the likes of Craig Davies, Danny Whitaker, Dwayne Mattis and Dean Morgan to join established players like Jack Lester, Tommy Lee and others.

I have to admit that being at the new  ground for the first few matches was felt rather odd, not really having a routine like we did at Saltergate but the ground was superb both from the outside and the inside. My main worry for the new stadium was that we would struggle to fill it, having had attendances averaging at around 3,300 the previous season. However, I was pleasantly surprised to see that the ground was always pretty much full, with the attendances this season averaging around 8,000, over double the 2009-10 season! 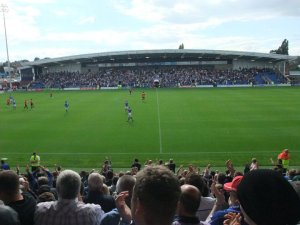 Average attendances have been over double those at Saltergate

On the field, the Spireites made an excellent start to life in League 2, winning their first four home games 2-1 v Barnet, 4-0 v Hereford, 2-1 v Lincoln City and 3-0 v Cheltenham Town. 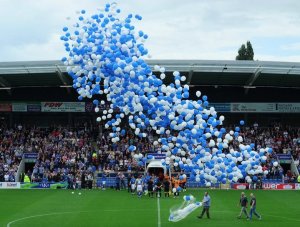 On 25th September I travelled to my first away game of the season, making the short journey to the Don Valley Stadium to watch unbeaten Chesterfield take on fellow promotion pushers Rotherham United. Sadly, the game was uneventful and the home side stole the 3 points with a goal from Adam Le Fondre, handing us our first defeat of the season. 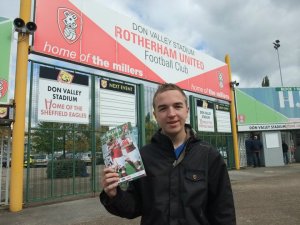 Then came the most incredible football match I have ever seen, and probably will ever see, Chesterfield v Crewe Alexandra on 2nd October. I remember we had tickets to watch Brazil v Ukraine, and also Chesterfield JPT Trophy match with Sheffield Wednesday just a few days away and saying to my Dad that I didn’t think this would be a very exciting match. How wrong I was! I was in a state of shock as Crewe took a 3-0 lead after just 13 minutes, meaning Chesterfield had conceded more goals in the first 13 minutes of the game than in all the other home games put together! Jack Lester managed to pull one back, but the Alex scored another to make it 4-1 to the visitors.  A real turning point happened after Crewe’s 4th goal, with captain Ian Breckin being replaced by ex youth player Craig Clay. This substitution was greeted by sarcastic applause as many fans felt Breckin was at fault for many of the goals. 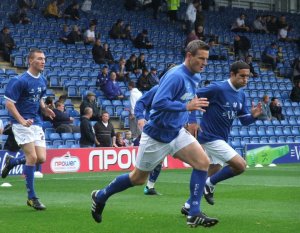 The Spireites played much more positive football in the second half, but still nothing until the 76th minute when Jack Lester made it 2-4. Two goals from the spot by Danny Whitaker, with a goal from Clayton Donaldson in between left the score at 5-4 with just seconds to go. Craig Clay then got the ball on the edge of the area and blasted the ball into the bottom corner, sending the stadium mental with fans jumping around, singing and celebrating the remarkable turnaround. I felt physically shattered watching this match. 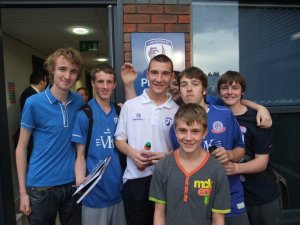 Craig Clay celebrates with the fans after the game

Just four days later it was time to make my first trip to Hillsborough for 7 years. A 2-1 victory at Walsall in the Johnstone’s Paint Trophy had set up a set up a second round tie against Sheffield Wednesday, and that was a game I just couldn’t miss. Living in Sheffield, I have a lot of friends that support the Sheffield clubs, so personally I feel more of a rivalry with these teams than even usual rivals Mansfield! 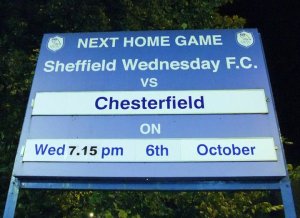 A big night for the Spireites

Personally, despite not being that interested in the JP Trophy the fact that our opponents were Sheffield Wednesday made the match a far more interesting prospect. There was a magnificent atmosphere inside the ground with over 3,000 Chesterfield fans in the ground. It took just 10 minutes for Chesterfield to take the lead through Dean Morgan, however Neil Mellor quickly equalised for the Owls. Jordan Bowery and Craig Davies both had goal disallowed before half time for offside, but replays showed that Davies’ goal really should have counted. It was Davies who looked to have given us the victory on the 84th minute when he scored right in front of the away supporters. However, once again the Owls got an equaliser after being awarded a penalty with only a minute of the game remaining.A reckless challenge from Derek Niven on Giles Cope saw Marcus Tudgay with a chance to equalise from the spot.However he had to score from the rebound after watching Tommy Lee save his penalty. 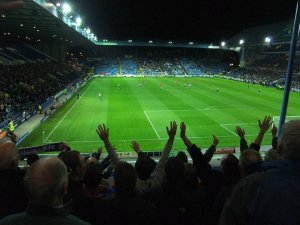 With no extra time this meant penalties, and despite having many chances to win it, it was Sheffield Wednesday who won the match, winning 8-7 on penalties. Looking back, this was really a blessing in disguise because while it would have been nice to beat Wednesday, it gave us a chance to concentrate more on the league, and of course we can always beat the Owls in League 1 next season! 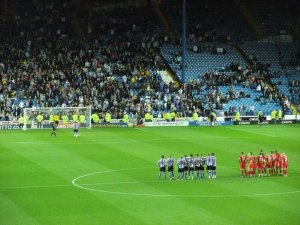 The Shoot Out at Hillsborough

Back to the League and Chesterfield’s amazing home form continued in dramatic fashion with a 2-1 win over Southend United with ‘super sub’ Scott Boden scoring a late winner to steal all 3 points for the Spireites. This was followed up by another classic match against Shrewsbury, which after Chesterfield led 4-0, the Shrews made a late fight back but it proved too little too late and Chesterfield won 4-3. After the Shrewsbury match, I met Mark Clemmit, better known as “Clemm” from the Football League Show and he was really friendly, even taking note of my website and then leaving a comment! 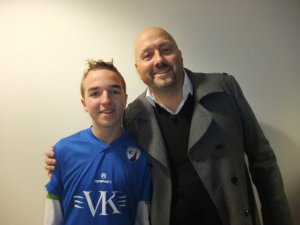 With Chesterfield playing the best football I had ever seen the club play and sitting comfortably in the automatic promotion places we decided to make the journey down to the Lamex Stadium to watch Chesterfield face new football league club Stevenage FC. Sadly after making the long journey, the match turned out to be a non-event with the game ending goalless. 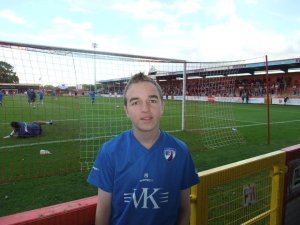 Tuesday 2nd November will go down in history as the first ever night match at the B2Net Stadium, and despite being a rainy evening it turned out to be a very memorable one. Another amazing performance from the Blues saw Chesterfield win 5-2 against Accrington with a brace of goals coming from Craig Davies and Danny Whitaker plus one from Jack Lester. The Accrington fans were not down about the result though, and their 123 travelling fans came up with the witty chant of ‘We’ve come in a taxi and we’re louder than you!” which on that particular night was at times scarily true! 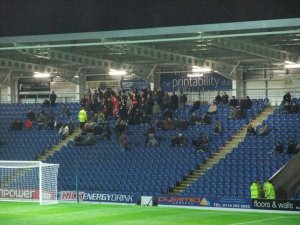 "We've come in a taxi and were louder than you!" - The 123 travelling Stanley fans

Up to now, the Spireites had been unbeaten at home. However, this was all about to change with the visits of Burton Albion and Oxford United in November. First up was the Brewers, who stole the victory with a goal from Shaun Harrad, and a few unhappy Spireites gave some of the Burton players (particularly Darren Moore) a frosty reception at the players exit after the games. Then it was Oxford’s turn, and the U’s came from behind to win the game 2-1. 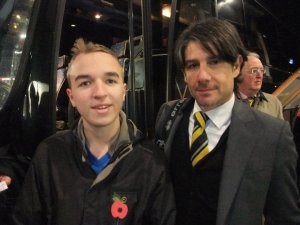 with Burton manager Paul Peschisolido whos team became the first ever to take 3 points away from the B2Net Stadium.

Luckily for the Spireites, this poor run of form came at a time when there was horrendous weather in England, with many matches being postponed due to snow and frozen pitches. It was no different for Chesterfield and with a home game against Wycombe, as well as a couple of away matches being postponed, there was only one game in December. This match was against Torquay United, and the Chesterfield got back to winning ways with a 1-0 win courtesy of a Jack Lester goal. This also meant that the Spireites headed into 2011 sitting comfortably at the top of the NPower League 2 and looking good for promotion.

B2Net in the snow before the game against Torquay, which was the Spireites only game of the month.