On Saturday 8th October 2011 I went to Hillsborough to watch Chesterfield face Sheffield Wednesday in League 1.

One of the most exciting prospects of playing in League 1 this season for me was getting to face both Sheffield clubs and today saw the first of four games against sides from the steel city at Hillsborough, home of Sheffield Wednesday. Living in Sheffield makes the games even more exciting for me as nearly all my friends support sides from the city, adding to the rivalry from my perspective.

I had been looking forward to the game all week and I felt that the Spireites had an excellent chance of coming away with something from the match. Chesterfield had won in mid-week against Notts County in the Johnstone’s Paint Trophy and so they came in to this massive game full of confidence. Meanwhile, the Owls had won every game at home so far this season and star striker Gary Madine had scored 9 goals in 9 games meaning Wednesday would be difficult opposition.

The game was made even more interesting due to various crossovers between the two teams. Manager John Sheridan made his return to Hillsborough, where he played for the Owls in the 1990’s as well as in form Chesterfield striker Leon Clarke who had also previously played for Wednesday. Drew Talbot was also an ex-Owl while Gary Madine had played briefly on loan for Chesterfield back in the final season at Saltergate.

We arrived at Hillsborough with around an hour to go before kick off and had a look around the ground, which I had visited for a match twice before, both times to watch the Spireites,. After walking around the ground and taking some photos, we entered through the turnstiles and took our seats on the away end behind the goal.

The away end was packed full of Spireites singing and chanting and a total attendance of 24,514 created a brilliant derby day atmosphere all around the ground.

The game kicked off at 3 o’clock and the Owls got off to the better start, breaking down the wing and crossing the ball in to dangerous areas more than once early on. Wednesday deservedly took the lead on the 17th minute when Lewis Buxton rose above the defenders to head the ball home straight from a corner.

The Owls continued to play the better football until around the half hour mark, when Chesterfield began to play better and create some chances. Talbot saw his shot sail wide of the post, and striker Craig Westcarr poked the ball just over the crossbar but it remained 1-0 to the home side at the break.

Chesterfield came out in the second half playing brilliantly and bossing the play. The best chance of this spell of play fell to Leon Clarke but his free header sailed well wide of the post. Sadly, despite all the possession and chances Chesterfield failed the find an equaliser and the Spireites paid for this when Gary Madine doubled the Owls’ advantage. Completely against the run of play, Madine fired in a wonderful 30 yard goal though Greg Fleming could probably have done better in the Chesterfield net.

This goal seemed to deflate the Chesterfield attack and I felt that the game was all but over. However, Leon Clarke flicked the ball past Stephen Bywater from a corner with just over 10 minutes to go and suddenly the game was back on.

Chesterfield went in search of an equaliser and piled the pressure on the Wednesday defence. With so much possession and attacking play, it looked like if anyone was going to score it was going to be the Spireites. However, once again against the run of play, Ben Marshall regained Wednesday two goal lead with a low driven shot past Fleming to kill off the game.

The game ended 3-1 to the home side, a result which I felt flattered Sheffield Wednesday a little. I came away from the game disappointed but I felt that for long periods of the match Chesterfield were on top but they failed to force the Wednesday keeper to make a single save. Sadly the Owls were simply more clinical in front of goal and in the end it paid off as the home side got the victory in an exciting game of football. 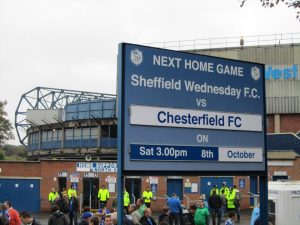 I arrive at Hillsborough 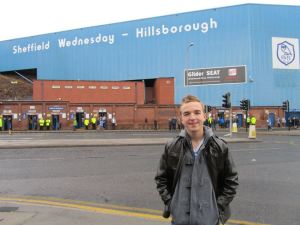 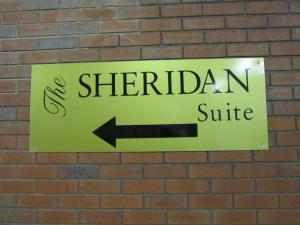 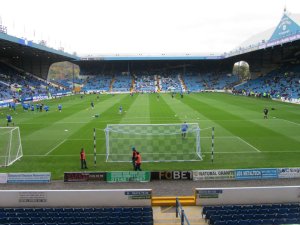 View from the centre of the away stand

The lower terrace of the away stand

A Chesterfield flag on the away end

The view from my seat 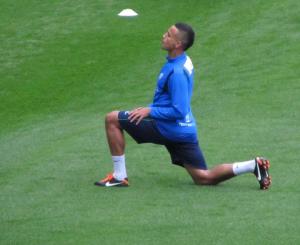 The players shake hands before kick off

Wednesday kick the game off 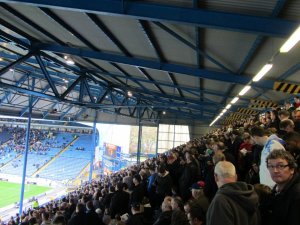 A packed away stand, full of Spireites 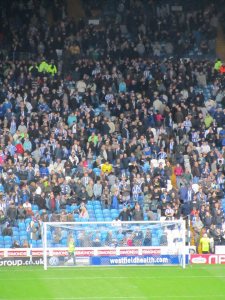 Wednesday fans behind the goal

The Owls supporters show off their flag

Leon Clarke back on the Hillsborough turf 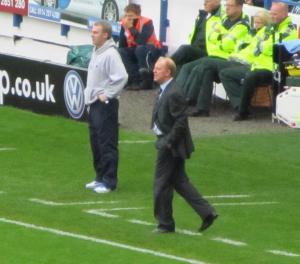 Sheridan and Megson look on from the touchline 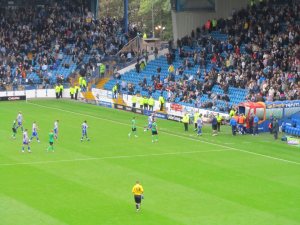 The players leave the pitch for the break 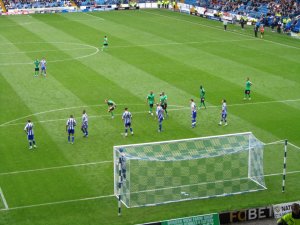 Chesterfield push for an equaliser

but Wednesday make it 3-1 late on